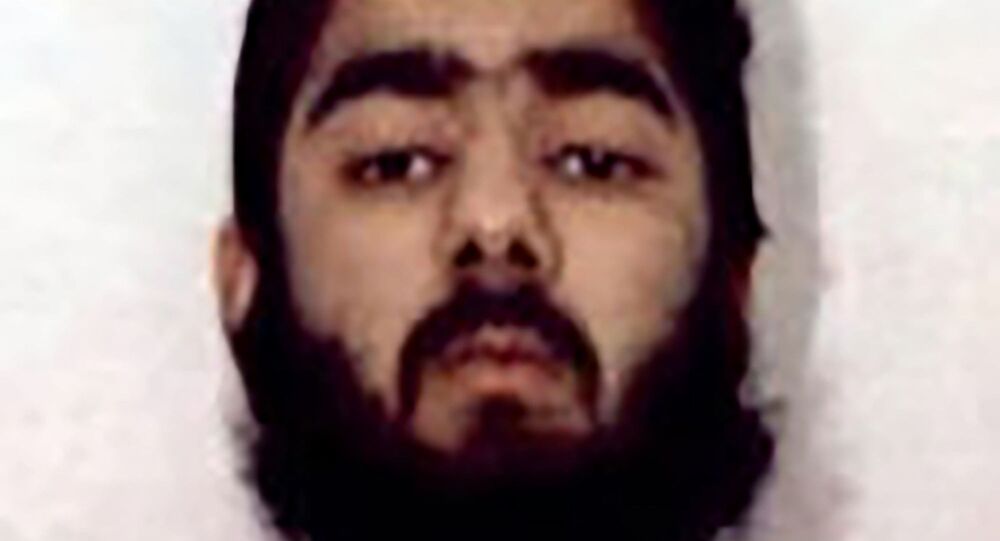 A convicted terrorist who had been freed from prison launched a murderous assault on two Cambridge University graduates after taping two knives to his wrists, an inquest has heard.

Usman Khan strapped the large kitchen knives to his hands with gaffer tape in a toilet cubicle at the Fishmongers’ Hall at the north end of London Bridge on 29 November 2019.

Detective Chief Inspector Dan Brown told an inquest Khan attacked Jack Merritt, 25, in the toilets during a break in the Learning Together workshop session.

The mother of Jack Merritt, who was killed in a terror attack at Fishmongers Hall in London in 2019 has told his inquest her son’s “death was a tragedy but his life was a triumph.”

Anne Merritt said he was a ‘force for good in the world’, with a ‘strong moral compass’

​The jury was shown an image of the gents’ toilets, with blood on the floor and a copy of The Fortress of the Muslim, an Islamic prayer book, which Khan had dropped.

DCI Brown said Mr Merritt suffered 12 stab wounds but staggered into the reception area as Khan attacked a volunteer, Saskia Jones, 23, who was stabbed once through the neck.

Khan, 28, then stabbed Isabel Rowbotham and Stephanie Szczotko but both survived their injuries.

DCI Brown said: “There was obviously a commotion because people heard screams. People went out of another exit.”

Jack Merritt’s and Saskia Jones’s inquests begin on Monday at The Guildhall in London. We miss our boy desperately every minute of every day. This will be an ordeal for us, but we hope it will allow us to draw a line of sorts under this terrible tragedy. Thank you so much to pic.twitter.com/BL4d0omKac

​He said Khan wanted to get out of the building but the door was locked so he held a knife to the chest of a security guard, forcing him to release the door lock.

Khan was followed and confronted by John Crilly and Steve Gallant, both former prisoners, and another man, Darryn Frost.

© AP Photo / Matt Dunham
Mother Of Man Murdered By Freed Terrorist Says 'His Death Was A Tragedy But His Life Was A Triumph'
Mr Crilly was armed with a fire extinguisher, Mr Gallant had an ornamental pike, and Mr Frost had a narwhal’s tusk which had been yanked off the wall.

DCI Brown said the armed officers stepped back but then fired further shots and "neutralised the threat posed by him."

Khan was born and raised in Stoke-on-Trent in the Midlands and was arrested in 2010 with eight others, all of whom sympathised with al-Qaeda.

When it comes to the events at #FishmongersHall (and the Inquest as its about to start) most vocal commentators are speaking from a place of ignorance.

Its evident in the errors they're already making.

​Khan was jailed for a minimum of eight years after admitting preparing terrorist acts but in December 2018 he was released from prison and sent to live in Stafford.

DCI Brown said something was scratched on the kitchen knives which Khan used during the attack and he said it was believed to be the word "Allah" in Arabic.

He said the suicide bomb belt which Khan was wearing was found to be "not viable" and had been made with the components from an Xbox, tape and guerilla glue.

DCI Brown said he believed Khan had put the suicide belt on during the train journey from Stafford to London on the morning of the attacks.

The inquest, which is expected to hear evidence about why Khan was not seen as a security risk when he was invited to the workshop in central London, is expected to last until the end of May.