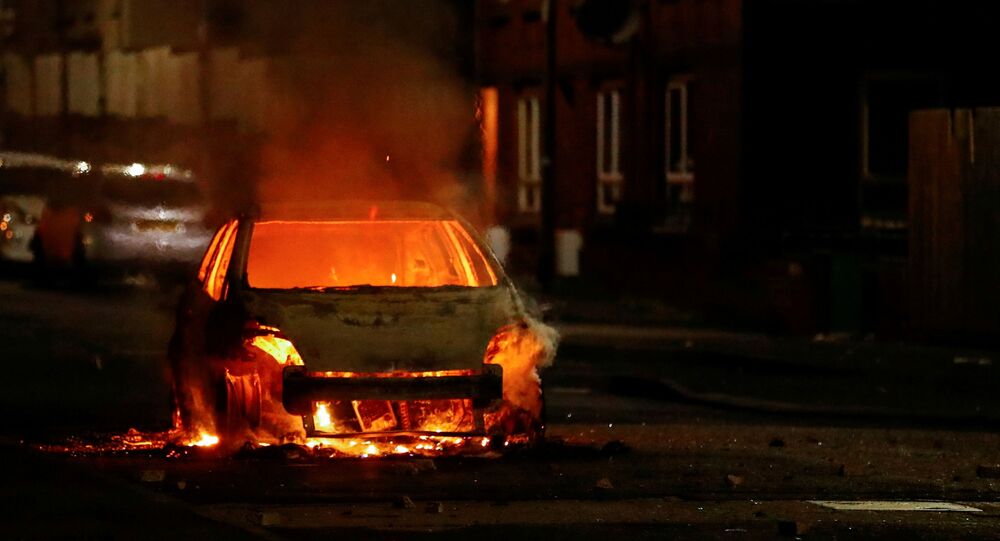 Who, if anyone, is behind the two weeks of violence in Belfast is unclear, but tensions have been high since the British government signed its post-Brexit trade deal with the European Union which sees customs checks on goods moving between Northern Ireland and the rest of the UK.

Fourteen police officers have been injured in the 12th night of rioting in Northern Ireland — despite pledges of calm out of respect for the late Prince Philip.

A car was stolen and set on fire before being driven into a police roadblock on Belfast's North Queen Street on Friday night, amid unrest across the city's Tiger's Bay district and Coleraine in County Londonerry.

"The worst thing I saw was a car that was stolen from a nearby street and lit on fire," one eye-witness said. "Then someone drove it and jumped out allowing the car to free wheel into the police barricade".

The resident said the disorder was no worse than previous nights, although locals were expecting a quiet night following the Duke of Edinburgh's death on Friday at the age of 99.

"There was plans for protests across the city but they were called off due to Prince Philip’s death," they said. “However, it seemed a crowd gathered at Tiger’s Bay and then trouble ensued. Youths were seen to been thrown masonry and petrol bombs.”

Protesters threw petrol bombs, bricks and roof tiles at police, 14 of whom were injured on North Queen Street. Three boys, all aged 14, were arrested. The night's violence brought the total number of polie hurt to 88.

Police appealed to parents “to use their influence to ensure we do not see a repeat of such ugly scenes”.

​It is still unclear which, if any, group is behind the unrest. But tensions have been simmering among unionists for months since the implementation of the post-Brexit trade agreement between the UK and European Union (EU).

The deal and the earlier Withdrawal Agreement see Northern Ireland staying within the EU's customs union for at least seven years, with customs checks on goods shipped to and from the rest of the UK.

That Northern Ireland Protocol is ostensibly to prevent the imposition of a "hard border" with the Republic of Ireland in breach of the 1998 Good Friday agreement that ended the decades of sectarian terrorism by Republican and Loyalist paramilitaries.

But this year the EU's powerful commission briefly ordered the border closed as part of its 'Vaccine War' with the UK. Days after Brussels backed down the Irish Gardai police set up checkpoints on cross-border roads and began issuing €100 fines to anyone crossing under COVID-19 rules.

Calls for restraint by US President Joe Biden, an outspoken opponent of Britain leaving the EU, seemingly went unheeded on Friday night.