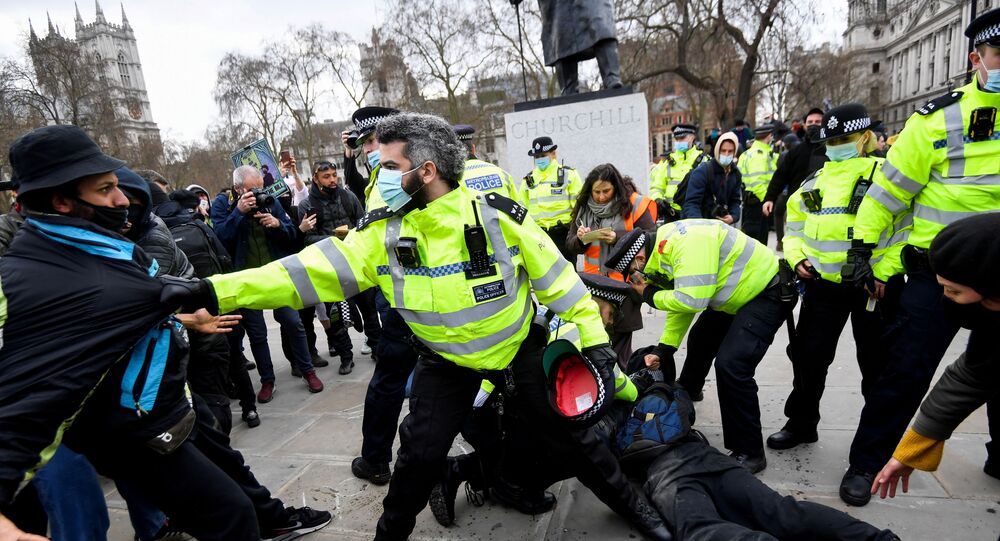 Over the past several weeks, as COVID-19 restrictions on mass gatherings have become laxer, 'Kill the Bill' protests have taken place across the UK against a government-proposed bill that would give more powers to police at non-violent protests.

Projectiles were thrown at police, causing at least one officer to be injured, as about 10,000 people turned up at a Saturday rally held in a crowded Parliament Square in London, whistling and booing the new Police, Crime, Sentencing and Courts Bill 2021.

The legislation would further empower police in England and Wales to impose conditions on peaceful protests, including those deemed too noisy.

"At this stage, 26 people have been arrested for a variety of offences including assault on police and breach of the peace," the Metropolitan Police said in a statement, adding that the policing operation is still ongoing and that the number of arrests is likely to rise.

So the 'Kill the bill' lot are out in force protesting against police brutallity by shouting "Off with their heads"..Promoting barbaric brutality..Absolute Mongs the lot of them... https://t.co/Nk24SSUhCt

The rally, with similar ones taking place all across Britain, including in Bristol, Liverpool and Newcastle on “the national day of action”, saw ex-Labour chief Jeremy Corbyn make a speech before multiple scuffles with police occurred.

Protests continued throughout the country today under the banner ‘Kill The Bill’ due to the proposed Police, Crime and Sentencing Bill that, if passed, would introduce new legislation around protesting. #Manchester, UK. #killthebill pic.twitter.com/fmD0mya0O3

“If we don't protest, things don't change”, he said, drawing cheers and applause from the audience thronging near the statue of Mahatma Gandhi.

Nearby, anti-lockdown activists staged their own protest, supported by Corbyn's brother Piers.

A small group of around 50-100 so-called 'Kill the Bill' protesters at some point began to block roads around the downtown square, chanting “All Cops Are B******s” and other anti-police slogans.

There have been a number of 'Kill The Bill' protests held in recent weeks to show opposition to the Downing Street-proposed law, which has raised concerns about peaceful protesters becoming flagrantly stifled.

"The vast majority of people who turned out in central London today did so while adhering to social distancing. They engaged with my officers when required and left when asked … However, a small minority did not engage despite the repeated efforts of officers on the ground. This left us with no option but to move to an enforcement stage and arrests have been made," Commander Ade Adelekan said.