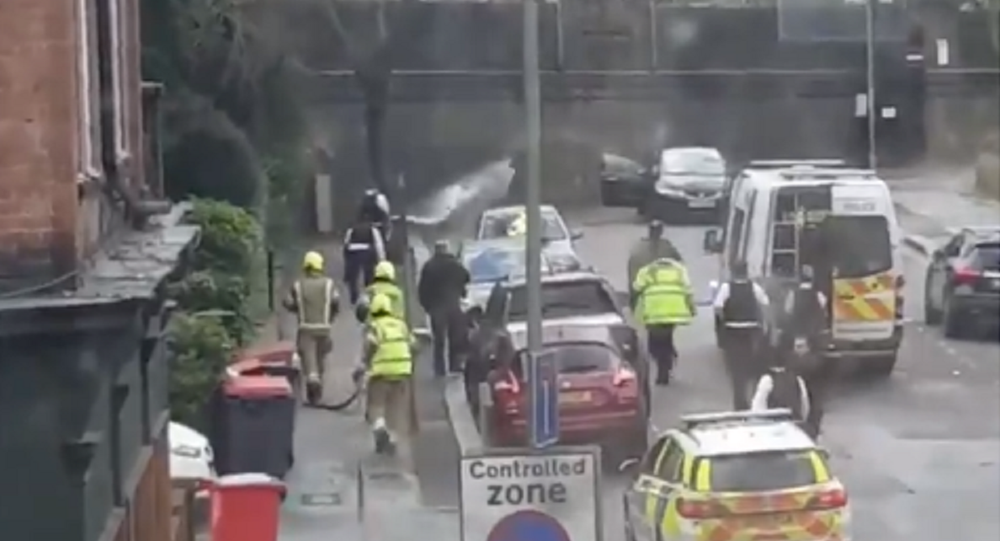 Police shut down a section of Golders Green Road in northwest London on Tuesday afternoon, with over a dozen emergency vehicles and a helicopter dispatched to the scene over a report “of a concern for safety.”

London police have detained a suspect who threw a Molotov cocktail at officers and firefighters near a synagogue.

Amateur footage filmed from a home near the scene shows an individual getting out of their car and throwing a petrol bomb while surrounded by police and fire crews on what appears to be a dead-end road. Firefighters are seen running to the scene, with an officer putting out a small fire with a hose as the suspect gets back into his vehicle.

Police confirmed in a statement that the incident began at 12:28 in the afternoon.

The suspect was “arrested on suspicion of a number of offences,” the police confirmed, noting that inquiries were “ongoing.”

(2/2) No members of the public or officers are believed to have been injured. Enquiries are ongoing. The man was arrested on suspicion of a number of offences. As a precaution, nearby roads have been closed.

Eyewitnesses say about 15 police vehicles, a fire brigade, and an ambulance were present.

Local media have reported that the authorities do not believe the incident to be anti-Semitism or terror-related, with the Community Security Trust, a local charity, saying it's unclear if the suspect was “threatening self-harm or threatening others.”

Incident in Golders Green this afternoon appears NOT terror related. We thank the emergency services for their constant vigilance and work.

London Police Braced For Rise In Gang Violence When Lockdown Is Lifted, Blamed On Social Media