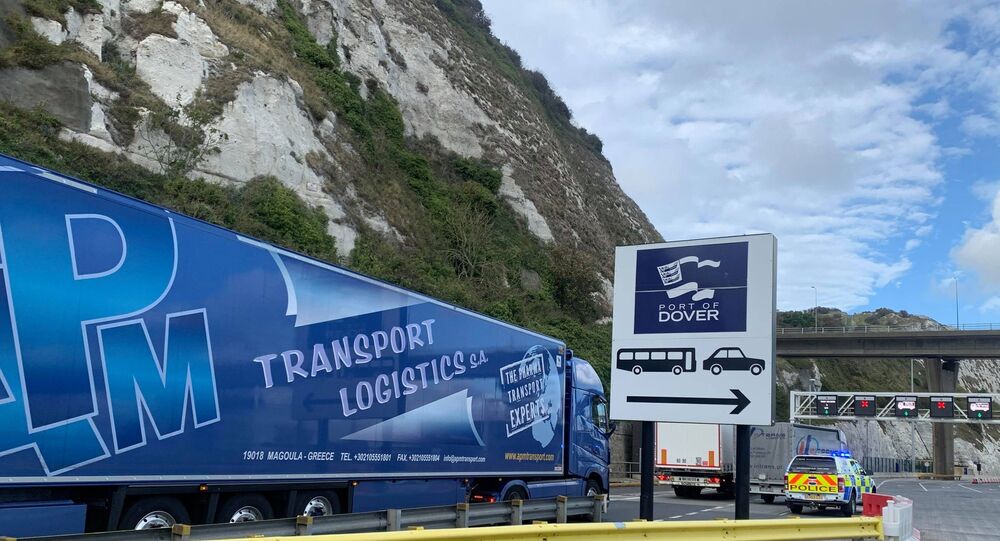 The United Kingdom is facing a serious border disruption in its main port with mainland Europe, as the deadline for the country's complete withdrawal from the European Union's regulatory bodies at the end of this year edges closer.

Of the many territorial quagmires that have emerged from the UK withdrawal from the European Union, a border in Kent is not one that is typically referenced.

Yet that is exactly what was announced by the British government on Wednesday, which intends to introduce a de facto internal border in the county, under the threat of fines, if drivers are found with the new Kent access permit (KAP), allowing them to continue trading in mainland Europe after the Brexit transition period ends.

Simon Evans, a Youtuber and truck driver for one of the major UK shopping chains, cited one of the current documents required to pass the Dover border currently.

“On that document, it will say what you’ve got on the back, what it weighs, where it’s from, who it’s going to, and every stage and process”, he said.

He explained that the new system places the entire responsibility for the paperwork, including the risk of being the sole recipient of the fine, on the driver.

“If you’ve got a cowboy outfit then they’re just going to use the system to stitch up their drivers”, Evans said.

He warned that a hold-up due to paperwork would disproportionately fall on the driver, rather than the haulier and, while the cost of the KAP has not yet been made public, fines could quickly accumulate for drivers.

“It’s not just one fine. The more things you’ve made a mistake on, the more fines, which is just a great revenue earner”, he said.

“There isn’t enough parking in Kent to accommodate this. It’s not for the benefit of the people of Kent. I think this is a political thing made by bureaucrats who don’t want us to leave the European Union and want to make it as much as a failure as possible”.

He added that truck driver wages have remained largely stagnant for many years. With a decimated trade union culture and increasing regulatory encroachment from the European Union, many truckers abandoned the industry - a trend which could prove disastrous for the UK economy.

When asked about the government's so-called ‘SMART’ technology, intended to track border movements, he asked why the system wasn’t ready “when they knew exactly what the leaving date was anyway?”

“I think they were always waiting for something to make us so that we never actually really left or that we didn’t leave the Customs Union. I think they never really thought for one second that we would actually be in the position we are in so they never did anything about it”.

He said that “part of it was just blatant incompetence and arrogance and the rest of it is a punishment”.

“Crossed between the blatant incompetence and the people who didn’t want it to happen and thought if they hold out long enough the British public would cave in. Then you’ve got the European Union who’ve made sure that this can’t be a success because if it does there will be others who will want to follow suit”.

Evans predicted that the new policy would affect the price of UK exports and have a serious “knock-on effect as haulier companies will have to hike up their prices” and leave trucks lying around carrying perishables, causing mass wastage.

When the policy was first announced on Wednesday, the UK Minister for the Cabinet Office, Michael Gove, said that truck drivers heading to the Port of Dover or the Eurotunnel in Folkestone will require the KAP to enter the county beginning 1 January.

During his address to the Commons on Wednesday, the government minister admitted that just 24% of businesses say they are “fully ready” for the new systems to be put in place post-Brexit.

“Indeed, 43% of businesses actually believe the transition period will be extended even though the deadline for any extension has now long passed and the date we leave the single market and customs union is fixed in law and supported across this House”, he said.

Gove explained that “only 50% to 70% of large businesses and just 20% to 40% of small and medium-size enterprises” are ready to apply new EU requirements.

“In those circumstances that could mean between only 30% and 60% of laden HGVs would arrive at the border with the necessary formalities completed for the goods on board”, he warned.

​Transporters who are discovered driving to border regions without a KAP could be slapped with a £300 fine by the Vehicle Standards Agency or law enforcement.

According to the government, the system will be enforced by police and automatic number plate recognition (ANPR) cameras.

A KAP has been under consideration by Whitehall as a means of preventing traffic chaos in the county for some time, but the announcement by the government on Wednesday confirming that the plan will become operational January 2021.

It follows an earlier September leaked document from Westminster, revealing that UK borders could experience “widespread disruption”, with traffic jams of 7,000 lorries and waiting times of up to two days to cross the border.

​The “reasonable worst-case scenario” report, put together by the Border and Protocol Delivery Group, predicted that passengers waiting for Eurostar trains could find themselves waiting 2 hours before boarding.

Trucks leaving depots in other parts of the country will have to receive a green or amber result from the online so-called ‘SMART’ Freight system to be valid for 24 hours, which will only last a single trip.

Implementation of the SMART freight technology, designed to regulate the movement of traffic into Kent and prevent congestion, is being developed by the Exit Operations committee, chaired by Gove, and was privy to the leaked report highlighting that preparations for post-Brexit border operations have dominated 26 government departments and that businesses across the country are unprepared for the shift.

While Gove has cited areas in Kent where investment has been made to prepare for the potential disruption of haulage and freight, associations have warned that SMART will not be ready for the 1 January deadline.

“News that the government’s much anticipated SMART Freight system is unlikely to be ready by the end of the year, with the beta version only anticipated for launch in mid-December, is a crushing disappointment for the logistics sector,” said Elizabeth de Jong, director of policy at Logistics UK, a national freight association.

She added that Logistics UK had offered “maximum support” to the government to help develop a system which will be “vital to the continued movement of trade to and from the EU” and expressed dismay over the revelation last Wednesday that the regime will not be fully ready and tested until April 2021.

Logistics UK said that government officials told businesses that a ‘beta’ version of the system would be available in December.

Concern that the blockages are the result of government inadequacy rather than a lack of preparation by business was echoed by the British International Freight Association (BIFA).

“The Government has received repeated warnings from all sides of the supply chain that neither businesses involved in trade between the EU and the UK, nor the freight and logistics sector that physically handles and manages that trade, is ready for the new procedures that will be in place from January 1st 2021”, said Robert Keen, BIFA director-general.

“With just over 14 weeks to go before the end of the Brexit Transition Period, traders and logistics providers are still waiting for so much information and clarity from the government and are shocked by the lack of consistency in Government policy, systems planning and procedures”.

He added that Westminster had adopted a “Carwyn James” approach to business and trade policy.

“Getting their retaliation in first worked for Carwyn James’ British & Irish Lions in South Africa in 1974, but Government making villains of the key workers who have been tackling the impact of the pandemic on the UK’s supply chains, will not have the same success”, he said.

The BIFA director said the organisation's members would be “more than able” to implement what was necessary if the government provided sufficient information, “the resources they require and systems that actually work”.

A Vision of the Future

An emergency Brexit measure - Operation Stack - was activated, permitting lorries to line up to enter the port of Dover creating miles-long queues and long wait times for drivers to expand terrorist security checks, leading some to suggest that this would become commonplace following the full withdrawal of the UK from European Union regulatory bodies.

​Kent is not the only area in the UK facing potential border post-Brexit troubles. In an admitted act of breaching international law, the administration of UK PM Boris Johnson is seeking to take further control over Northern Ireland and break the terms of the Withdrawal Agreement, which it left the EU under in January 2020.

As with Ireland, border disruption is dependent on the British government's ability to secure a trade deal with the European Union, as the UK is set to leave the bloc's Single Market and Customs Union at the end of the year.