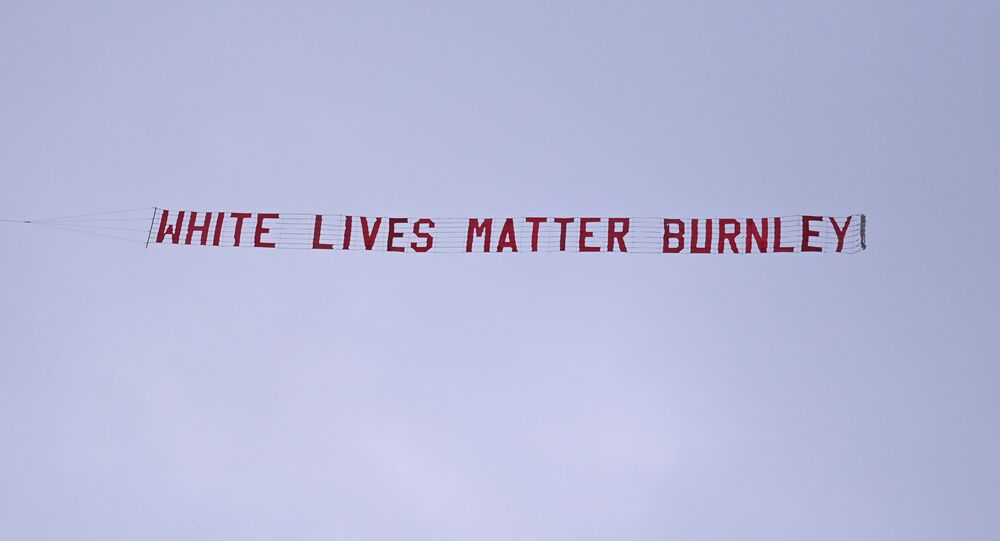 There have hardly been stronger racial divisions in the West this century than those triggered by the death of George Floyd. The Black Lives Matter movement has seen a revival, as well as a pushback over what critics view as overly callous efforts to instil social justice. The United Kingdom has become one of the hotspots in the new culture war.

A ‘White Lives Matter’ banner flown during a Monday game of football in England has left fans divided.

The Premier League match between Manchester City and Burnley FC was (literally) overshadowed by the slogan, which was pulled by a small single-engine plane above the Etihad Stadium seconds after the players kneeled in support of Black Lives Matter.

Burnley fan Jake Hepple claimed responsibility for flying the banner. He shared a video of the flight on his Facebook page and wrote, “I'd like to take this time to apologise... to absolutely f***ing nobody,” adding that it is “apparently racist to say ‘white lives matter.’”

The post has been taken down, and police are weighing whether the incident amounts to a criminal offence. Activists, meanwhile, are calling on Hepple’s employers to fire him for being a “white supremacist”.

Burnley immediately apologised for the stunt and called the banner “offensive”. The club, which supports the Black Lives Matter campaign, also vowed to issue lifetime bans to anyone responsible for arranging the flight.

It said in a statement: “The club has a proud record of working with all genders, religions and faiths through its award-winning Community scheme, and stands against racism of any kind.”

“We apologise unreservedly to the Premier League, to Manchester City and to all those helping to promote Black Lives Matter.”

Several Burnley players, including captain Ben Mee, likewise condemned the banner. “I’m ashamed and embarrassed that a small number of our fans have decided to put that around the stadium,” Mee said.

Burnley’s decision to condemn the ‘White Lives Matter’ slogan, along with its support for Black Lives Matter, has raised eyebrows on social media, given that the stunt occurred just two days after the murder of tree white people in a terror attack in Reading.

“So what they are saying then is ‘white lives don’t matter’? Have they considered the illogicality of their reaction?” wrote Gerard Batten, a former UKIP leader. “If black lives matter so do white.”

"Of course. All lives matter."

"It means black lives matter too. Not that others don't! Educate yourself."

"OK. But black lives are included in all lives..."

The PC brigade will get on their knees for 'Black Lives Matter' but activate selective outrage against 'White Lives Matter'. There is no difference: All Lives Matter. https://t.co/g4QI2eZrWJ

Gotta laugh at the outpouring of rage from the media over the white lives matter banner, whilst the silent majority is thinking well done sir!! #ScumMedia

Black Lives Matter is a rallying cry of African American protesters who are speaking out against perceived racial discrimination and police brutality in the United States. Sympathy protests have been taking place in some other countries, including the UK.

The slogans White Lives Matter and All Lives Matter have been adopted by those who want to say that all lives should be viewed equally and no lives are “more equal” than others. BLM supporters argue that these slogans overlook the racism towards black people and aim to deligitimise their movement.