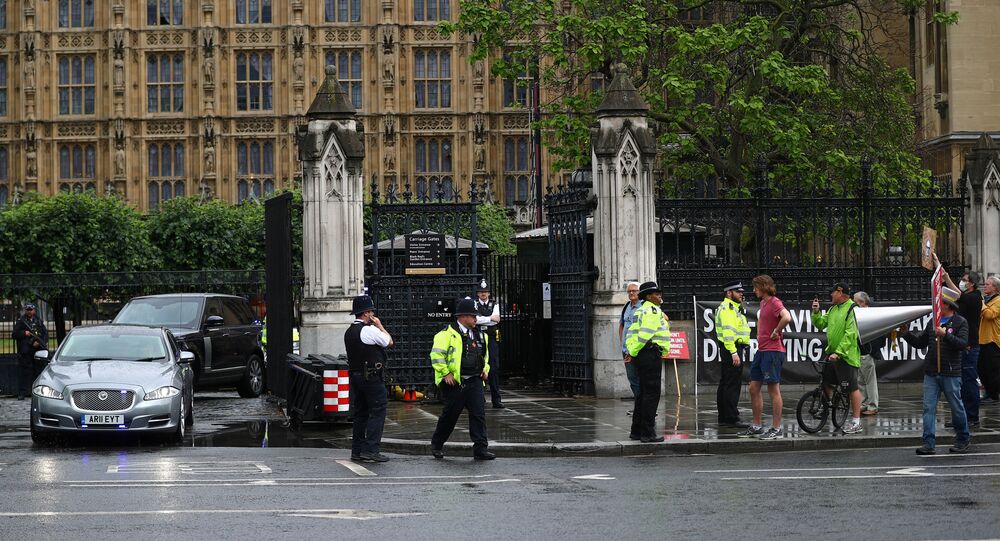 The UK Prime Minister was leaving the Houses of Parliament in central London on Wednesday when a protester ran into Boris Johnson's convoy, causing a crash of vehicles.

Following the weekly Prime Minister's Questions at the Parliament, Boris Johnson was leaving Westminster in his car, followed by his security staff in a Range Rover.

Bois Johnson in car crash at Parliament. Just now. Security drives into back of his car as Kurdish protester runs into road. pic.twitter.com/k1kCplzyZ5

​A video filmed by one of the by-standers shows a protester running in the middle of the road in front of the PM's car. The driver of the Jaguar, carrying Johnson, hit the breaks, causing the following vehicle to crash into its rear end.

© REUTERS / HANNAH MCKAY
The dented car carrying Britain's Prime Minister Boris Johnson leaves the Houses of Parliament, after it was involved in a collision, in London, Britain, June 17, 2020.

Following the incident, both cars drove away from Westminster, leaving agitated protesters and police behind.

The news quickly spread on social media, and comments to the video poured in.

PM Boris Johnson in car crash outside Parliament Square in Westminster when a protester ran out into the road! But thanks God everyone is safe pic.twitter.com/vPq6CXdG2l

I hear that @BorisJohnson has been in a car crash outside Westminster....well that's better than the car crash that normally takes place INSIDE Westminster

​Another Twitter user noted that it has been "a disastrous year for Boris."

It’s been a disastrous year for Boris. To add insult to injury, he’s just had a car crash.

Metropolitan police reported the incident later in the day:

"At approximately 14:30hrs today, 17 June, two police vehicles were involved in a collision in Parliament Square.

The police vehicles were part of a security movement. A pedestrian is reported to have stepped onto the road, causing the vehicles to suddenly stop, which has led to two of the vehicles in the convoy being involved in a damage-only collision. No injuries have been reported.

A man, no further details at this time, was arrested at the scene for offences under Section 5 of the Public Order Act and for obstructing the highway.

All vehicles were able to drive from the scene."