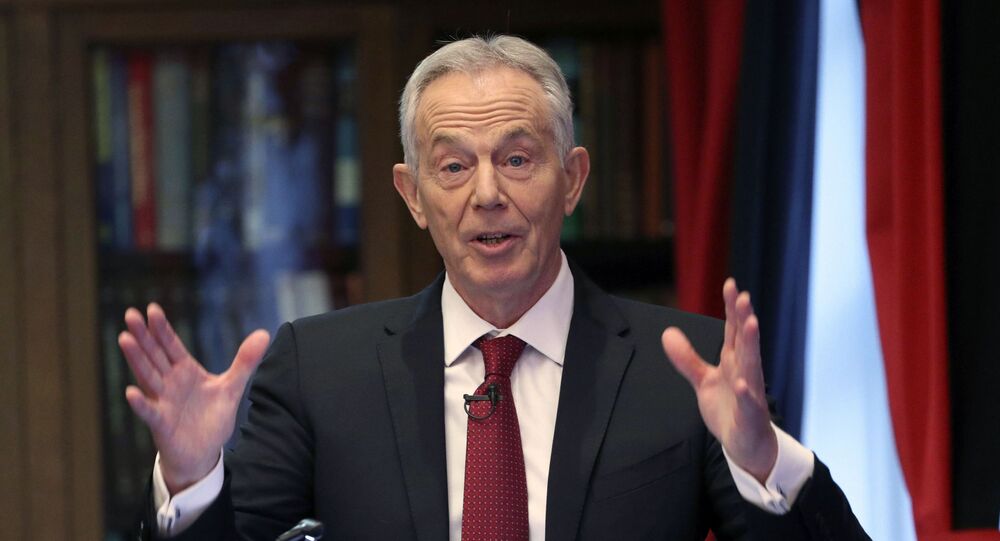 'This S**t That Won’t Flush': Brits Are Furious After Ex PM Tony Blair Speaks on Coronavirus on TV

The government is now divided on when to lift restrictions with some in the Cabinet saying that a prolonged lockdown will result in catastrophic economic fallout. Prime Minister Johnson and Health Secretary Matt Hancock are among those who oppose lifting the lockdown early as they reportedly fear this may result in a second wave of the epidemic.

Social media users in Britain were furious after ex-British Prime Minister Tony Blair appeared on the weekday TV programme Good Morning Britain where he spoke about the coronavirus pandemic, outlining the steps the British authorities need to take to deal with the disease.

The 66-year-old, who headed the Labour Party from 1994 to 2007, noted that it is necessary to reorder the whole government, dividing up the different key elements and have senior ministers in charge of each element. This, Blair said, will give British authorities the "capability of dealing with all the different dimensions and not getting overwhelmed".

"It is the most complicated and difficult challenge I’ve ever seen in politics. So I have every sympathy and solidarity for people who are in power and making decisions. I think the people in government would accept this - we were probably slow in the first stages of the disease. The economic and indeed health damage of this lockdown is so severe that we've got to put everything in place now, all the preparedness we need in order to make sure we can ease the lockdown as much as possible, while still being responsible about the spread of the disease. Whatever I’m saying I put in the bracket of constructive advice and not criticism", Blair said during an interview on Good Morning Britain.

His statements drew a barrage of criticism on social media.

Why is he not in prison?

​Netizens said Blair had no place to advise the government on the coronavirus after he dragged Britain into a war in Iraq.

War criminal Tony Blair having the nerve to give advice on a crisis🥴 #GMB pic.twitter.com/xWifm51Zi5

When you were in power, you destroyed an entire country and an old civilization for few barrels of oil.

Any sympathies for them!?

​Despite the torrent of negative comments there were users, who praised Blair’s statements noting that he offers real solutions.

I hope you all tuned in to watch Tony Blair on GMB, as he offers solutions to the crisis left, right and centre like a superhero seeking pardons for his past mistakes. #GMB#TonyBlair

Tony Blair head and shoulders above any British politician in the last 30 years. His tone here is right; he wants to support the government in these terrible times, understands the immense challenges they face but also has experience they lack.

Boris Johnson's government has been repeatedly criticised domestically for its purportedly slow response to the coronavirus, with people citing the shortage of medical equipment and protective gear for healthcare workers.

British authorities are now divided on when to lift restrictions with some in the Cabinet saying that a prolonged lockdown would result in catastrophic economic fallout. Prime Minister Johnson and Health Secretary Matt Hancock are among those who are against lifting the lockdown early as they fear this may result in a second wave of the epidemic.