The prison system is letting down inmates, staff, and the public as a result of a combination of failings including governmental budget cuts, poor planning by HM Prison and Probation Service, and for-profit prison maintenance providers which haven't delivered value for money, according to a parliamentary oversight body.

The prison system is not meeting the needs of either prisoners nor those that work in them throughout England and Wales, according to a National Audit Office (NAO) report published on 7 February 2020. 98% of the approximately 84,200 spaces were filled in December 2019 with 60% of inmates being held in "crowded" conditions. Meanwhile the last few years have seen violence in prisons reach record levels.

The parliamentary oversight body, which reviews the implementation of public policy by government, also says that the overcrowding is brought on by longer prison sentences being handed down, while only 13% of the announced 10,000 new prison places have been built.

Their report, Improving the Prison Estate, notes that research conducted by HM Prison and Probation Service (HMPPS) draws causal links between the conditions over which prisoners are held and their behaviour. They also point out that over 40% of prisons inspected from 2015 -2016 and 2019 - 2020 were rated overall "poor" or "not sufficiently good" in respect of their safety.

HMPPS has failed to sell off enough of their old prisons and because they have yet to build enough new facilities prisoners are being kept in unfit cells which should have already been demolished. 41% of prison facilities either require major repair or need to be replaced altogether while 2% are at risk of "imminent break-down", the NAO says. 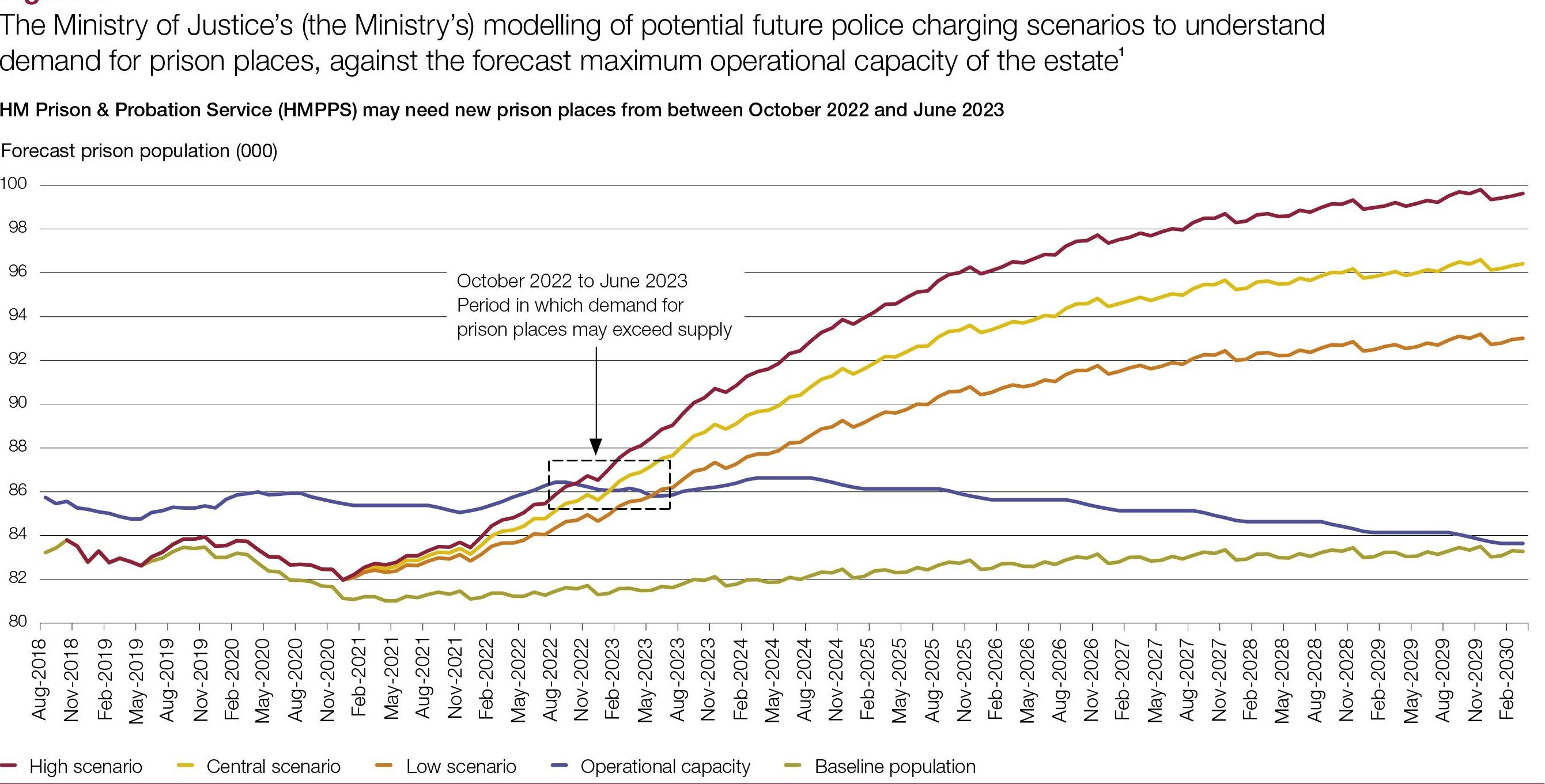 They also note that some inmates are kept in overly restrictive environments, unsuitable for the low risk they pose and unhelpful towards their rehabilitation back into society, while more dangerous inmates are being housed in conditions which are not secure enough.

Privatising the maintenance of certain prisons has also not provided value for money:

"HMPPS expected to pay its facilities management providers £17.7 million for variable costs at business case stage, but by 2018-19 it had paid £160.4 million"

That's a difference of £142.6 million between what the HMPPS thought outsourcing would cost them and what it actually did, the report emphasises.

Deborah Coles, Director of the charity INQUEST, responded to the report by arguing that:

"The levels of despair and neglect in prisons is a national scandal that is resulting in historic numbers of preventable deaths. Yet the health and safety of people in prison appears to be very low on the agenda of the new government".

She took aim at current state policy by saying that, "Prioritising prison building and punitive policies will only do more harm and exacerbate this already failing system. In the long term, protecting both prisoners and the public from more harm will require investment in our communities, not the dangerous expansion of the prison estate."

Richard Garside, of the Centre for Crime and Justice Studies, put out a short statement in which he expressed his hope that the proposed Royal Commission on Criminal Justice is "given the scope to consider the current prisons crisis and how it might best be resolved".

"On just about every measure, the current approach is failing. Far too many prisoners are being held, and far too many staff are being expected to work, in dangerous, overcrowded and dilapidated buildings. The backlog on prison maintenance has grown. Plans to expand prison capacity have stalled", Garside says.

Garside's comments mirrored those of Coles by arguing that the state should, "rethink some of its basic assumptions, developing a long-term strategy to prevent unnecessary criminalisation and tackle unncessary imprisonment", rather than trying to, "build its way out of the current prison crises".

A Ministry of Justice spokesperson said that they "recognise the pressures facing prisons which is why we are taking action to improve the estate and ensure sufficient resource is in place.

"We will always have enough prison places to keep offenders behind bars and the Government's £2.5bn investment will create 10,000 modern places, on top of the two new jails already being built", they added.