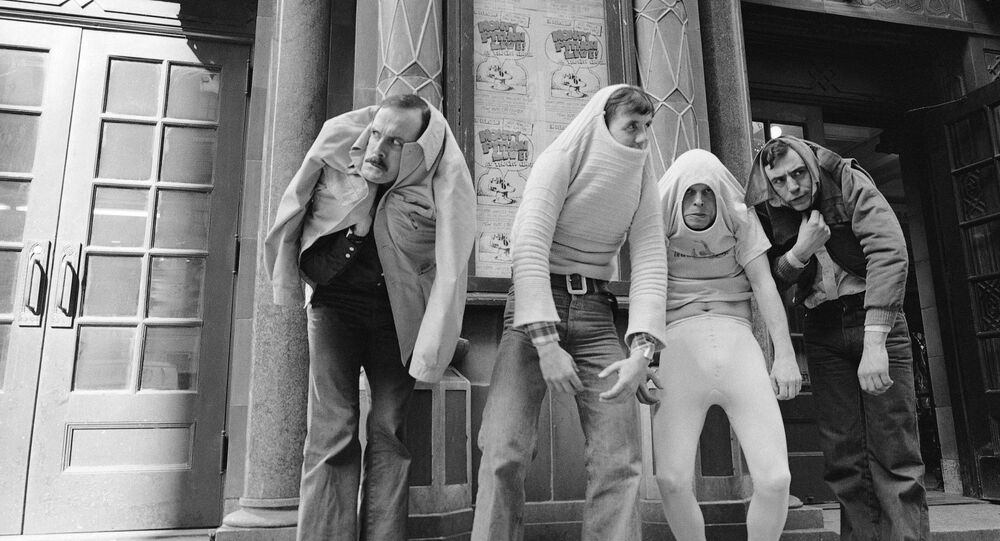 Terry Jones, one of the founding members of British comedy legends Monty Python’s Flying Circus, has died aged 77. The Pythons influenced a generation of comedians and Jones was in many of their funniest sketches.

Terry Jones, who starred in the Monty Python television show and in its spin-off films, has died after a long battle with a rare form of dementia.

Jones leaves behind his Swedish wife Anna - who was 41 years his junior - and a 10-year-old daughter, Siri.

Chapman died in 1989 but the others are all alive and well, unlike the famous parrot.

So what were the best Monty Python sketches?

In the famous 1970 sketch Terry Jones plays the owner of a greasy spoon cafe who regales the menu in an increasingly high-pitched shriek.

Eric Idle and Graham Chapman - the latter dressed in ladies’ clothes, a grey wig and carrying a handbag - sit quietly as the list of dishes gets more and more outlandish.

Remember showing my kid Monty Python for the first time a few years ago. His review, through one of his little shoulder shaking laughs: "It's like they're deliberately trying to say the most stupid thing possible!" We'll all miss you Terry Jones.

​But they all include spam - a brand of canned pork which became popular in Britain during the 1940s but by 1970 had become unfashionable and was soon to become literally a laughing stock.

Jones reads out more and more spam-dominated dishes until “she” gets to the piece de resistance: “Lobster thermidor aux crevettes with a mornay sauce” topped with….you guessed it….spam."

Monty Python is an oasis of sanity in an insane world.
Vale Terry Jones, thank you. pic.twitter.com/i7EjywGWhV

​Chapman then asks if there is anything on the menu which does not come with spam.

In this sketch from a 1971 episode of Monty Python’s Flying Circus, Jones plays an old-fashioned English gentleman sipping a pint of beer quietly in the pub when he is accosted by Eric Idle’s character, Arthur.

“Is your wife a goer?” asks Arthur, who appears to be something of a playboy or what would nowadays be called a “swinger”.

#RIPTerryJones. Monty Python was a huge influence on the Simpsons writing staff (and myself). pic.twitter.com/Bvf7MRNaAw

​Jones, whose strait-laced character’s appearance is topped off with a bowler hat - which were still in use by a small minority of Englishmen in the early 1970s - is affronted and replies: “I beg your pardon?”

Arthur persists: “Does she go? Eh? Eh? Know what I mean? Does she go?”

“She sometimes goes,” replies Jones, who fails to pick up on Arthur’s double entendres.

Eventually Jones’ character gets angry and says: “Look, are you trying to insinuate something?”

Arthur then becomes bashful and asks: “You’re a man of the world. You’ve slept with a lady?”

Then comes the punchline

Monty Python was at its best satirising class differences in Britain in the late 1960s and earlier 1970s but it did it by injecting a large infusion of absurdity.

In this sketch Graham Chapman, Terry Jones and Michael Palin are businessmen in dark suits and pinstripe trousers listening to a presentation by Mr Wiggin, an architect played by John Cleese, about his plans for a residential tower block.

Mr Wiggin begins his presentation: “This is a 12-story block combining classical neo-Georgian features with the efficiency of modern techniques. The tenants arrive here and are carried along the corridor on a conveyor belt in extreme comfort, past murals depicting Mediterranean scenes, towards the rotating knives. The last twenty feet of the corridor are heavily soundproofed. The blood pours down these chutes and the mangled flesh slurps into these…”

Palin’s character then interrupts Mr Wiggin and Jones’ character interjects: “Do I take it you are proposing to slaughter our tenants?”

“Does that not fit in with your plans?” Mr Wiggin replies, to laughter from the live audience.

Mr Wiggin then explains that his background is in designing abattoirs.

At which point Mr Wiggin loses his temper and claims he is the victim of a conspiracy by freemasons.

A second architect, Mr Wymer (played by Eric Idle), then enters and gives his presentation for the tower block which includes a model which falls over and catches fire.

But he still gets the contract, after giving the clients a masonic handshake.

Jones and the other Pythons were all university-educated and very knowledgeable about history and culture.

No other TV show comedians would have dreamed of coming up with a sketch based on a group of medieval Spanish cardinals who interrogated and tortured those suspected of being Protestants or Jews.

In the sketch Jones played Cardinal Biggles, alongside Michael Palin as Cardinal Jimenez and Terry Gilliam as Cardinal Fang.

They capture an innocent and elderly English woman from her living room, take her to dungeon and proceed to torture her.

But instead of real torture they torment her with cushions and “a comfy chair” and try to make her confess.

The sketch launched one of Monty Python’s catch phrases: “Nobody expects the Spanish Inquisition.”

In their first cinema film, Monty Python and the Holy Grail, the Python team play an array of characters in a sprawling tail based on King Arthur’s quest for the medieval relic from the Last Supper.

One of Jones’ characters is Prince Herbert, a scrawny and pathetic royal runt who is set to inherit the lands surrounding the Swamp Castle from his father, a king played by Michael Palin.

Terry Jones' performance as Brian's mum in #MontyPython's Life of Brian will forever go down as one of my absolute favourite comedy performances of all time. RIP you magnificent man.

"He's not the messiah, he's a very naughty boy!" pic.twitter.com/PO0BpZUxPO

​The scene begins with the king looking out of the windo of the castle and telling him: “One day, lad, all this will be yours.”

The king clips him round the day and then begins to tell him how he built the castle up from the ground, and rebuilt it when it collapsed into the swamp.

The effeminate prince then says he does not want to marry the daughter of a nobleman who owns “huge tracts of land”.

Eventually the king decides to lock the prince up so he cannot escape but he has to entrust him to the incredibly dim-witted guards.