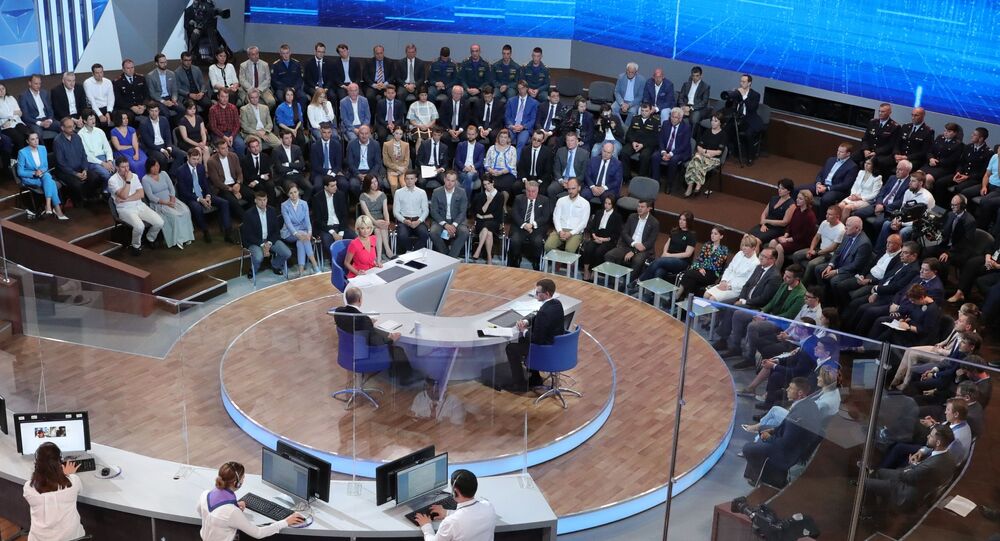 Poll: Over Third of Respondents Plan to Watch Putin's Q&A Session in Full

MOSCOW (Sputnik) - Thirty-five percent of Russians who know about President Vladimir Putin's upcoming annual Q&A session, say they will watch it live in full, according to a survey by Russia's Public Opinion Research Center (VTsIOM).

"Among those aware about the Direct Line, 35% said that they would watch the show live from beginning to end, 12% would watch fragments, 39% would get the gist from the news and the internet, and 13% would not watch the president's speech", the pollster said.

It added that 77% of Russians are aware of the upcoming programme, with 67% of respondents interested in hearing the president's answers to citizens' questions live.

Three percent have already submitted their questions, 10% are still planning to do so and 85% do not have such plans.

The televised session, known as "Direct Line With Vladimir Putin," will start Wednesday at noon Moscow time (09:00 GMT). One can submit their questions either via a special mobile application and text or MMS messages or through the show's website and social networks.

The tradition of holding live Q&A sessions to answer questions fielded by the public was introduced by Putin during his first term as the Russian president in 2001.