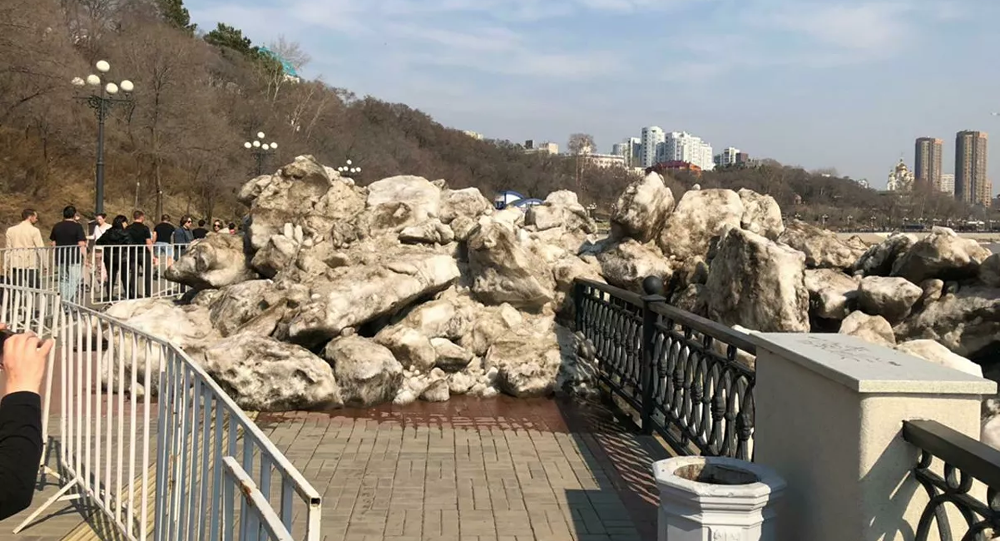 Fortunately, the incident didn’t cause any injuries or deaths, with its impact limited to waterfront damage.

A massive ice drift in the Amur River has crashed into the coastline in the Russian Far East city of Khabarovsk, ripping down a concrete-reinforced metal barrier and nearly crushing passersby who had gathered to watch.

Dramatic footage of the incident was captured by local residents armed with cellphones, with huge slabs of ice seen pushing up onto the embankment.

Video shot from above the area showed ice drifts literally hundreds of feet long moving toward the shore at high speed, crashing against one another, forming ice chunks and forcing part of the floe to spew onto the shore.

The local directorate of the Ministry of Emergency Situations, Russia’s equivalent to the US Federal Emergency Management Agency, confirmed to Sputnik that a task force had been dispatched to the scene and that no civilians are in danger.

The ice is believed to have come from the upper reaches of the Amur, the powerful river which forms the border between Russia's Far East and northeastern China.

© CC BY-SA 4.0 / Andrey Luzik / T-80BVM
Only in Russia: Watch T-80 Tank Pull Bus Out of Ditch in Amur Region
This type of invasion of the shore is said to be a yearly occurrence on the Amur, although typically the ice pileups occur outside built-up areas.

This isn’t the first time this year that the river demonstrated its power to local residents. Last week, it was reported that another ice drift had “hijacked” three ships from a port in Khabarovsk and carried them downstream. Two of the ships – a pair of tugs – travelled several kilometres before being caught on a sandbank near the coast.

Only in Russia: Watch T-80 Tank Pull Bus Out of Ditch in Amur Region

Some 2,800 People Join Rally in Support of Arrested Ex-Governor in Khabarovsk – Authorities