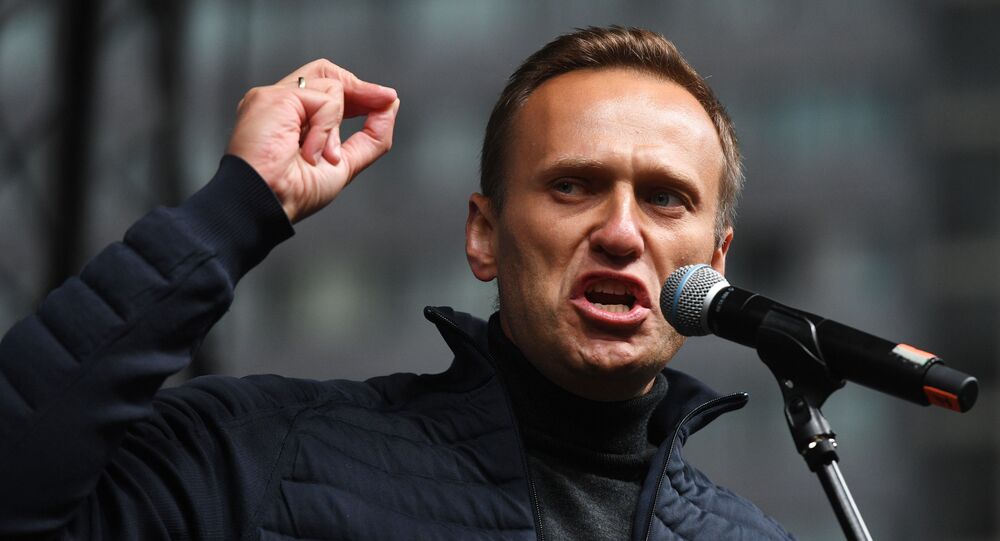 Russian Opposition Figure Navalny in Coma After Being Hospitalised

Navalny earlier announced that he would close his Anti-Corruption Foundation (FBK) after a series of scandals around its activities and a criminal probe into the suspected laundering of around 1 billion roubles ($15.3 million), obtained by the foundation via criminal means.

Russian opposition figure Alexei Navalny was admitted to an intensive care unit in a grave condition, his press secretary Kira Yarmysh announced via Twitter. He is now in a coma and was put on an artificial lung ventilator.

"This morning Navalny was returning to Moscow from Tomsk. He felt unwell during the flight. The plane made an emergency landing in Omsk. Alexei has toxic poisoning. We are in an ambulance now", she tweeted, adding that at the moment Navaly is unconscious.

Deputy chief of the Omsk hospital Anatoly Kalinichenko stressed that a diagnosis has not yet been determined, however, despite the medics' calls, Navalny's press secretary has already claimed the politician might have been poisoned.

​"We have requested to bring the police to the hospital", she added, speculating that Navalny could have been poisoned by something added to his tea, as it was the only thing he had this morning.

The Omsk regional health ministry revealed that medical experts from all fields are working to establish a diagnosis for Navalny.

"There are a number of diagnoses that specialists are working on, which are being confirmed or excluded. Specialists of all fields are involved. The patient's condition is serious," the press office of the Omsk regional health ministry stated.

A spokesperson for the Tomsk branch of the Russian Interior Ministry, Mikhail Mikhailov, confirmed to Sputnik that the transport police are looking into the incident. Airport management has also vowed to do their part in investigating the incident. "We are looking into all the circumstances, we will examine CCTV recordings", they said.

Yarmysh also claimed that this is not the first time the Russian opposition figure might have been poisoned. In 2019, after being arrested for his calls for supporters to take part in an unauthorised rally in the centre of Moscow, Navalny was hospitalised with a diagnosis of an acute allergic reaction. While his representatives alleged that it was "a poisoning by an unknown chemical substance", medics found no traces of poison upon examining the samples.

Navalny who founded the Anti-Corruption Foundation (FBK) has been arrested several times and was even briefly jailed in July 2013 on embezzlement charges. In December 2016, Navalny announced his decision to run for the presidency during the 2018 election but was barred by Russia's Central Electoral Commission due to his previous convictions.

Election Commission head Ella Pamfilova said that Navalny was ineligible to become a candidate, stressing, however, that he could join a presidential race only after 2028 in accordance with the law.

In August 2019, the Investigative Committee of Russia summoned several FBK employees for questioning over a money laundering case and announced it had ordered to freeze the FBK's bank accounts.

The authorities launched a criminal investigation into the laundering of around 1 billion roubles ($15.3 million), obtained via criminal means. As a result, in July 2020 Navalny said he would close the foundation, which had also been declared a foreign agent.