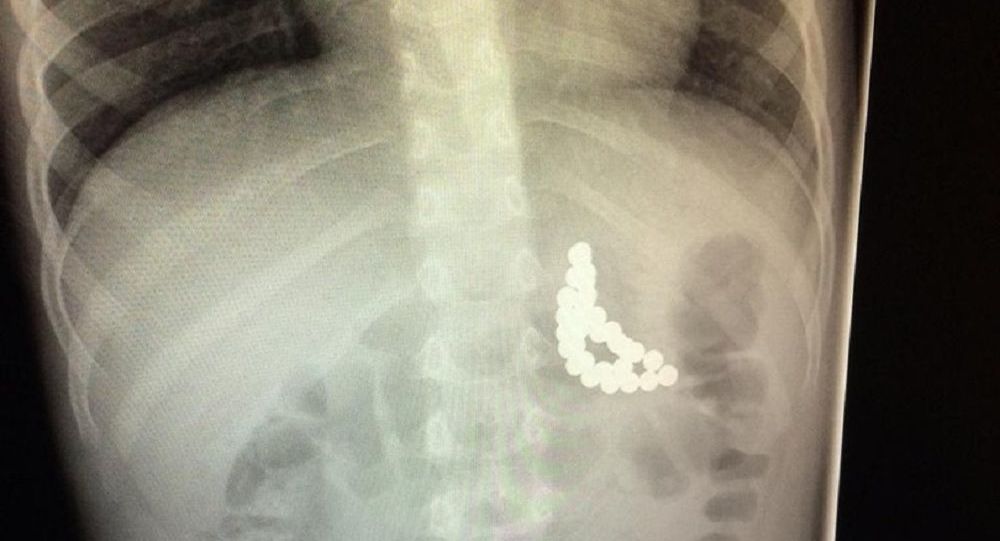 The three-year-old boy was rushed to hospital by his parents in the Siberian city of Tomsk after they discovered that he was experiencing extreme stomach pain.

Doctors from the emergency wing of the Children’s Hospital in Tomsk, Russia saved a little boy’s life after he swallowed 31 magnetic toy balls, the region’s department of health has reported.

After being told by parents that their child was experiencing abdominal pain, doctors X-rayed the boy, discovering the source of the problem and deciding to use the type of flexible tube ordinarily used in fibrogastroscopy, with the modified tube fitted with a powerful magnet.

According to doctors, one of the metallic balls had already penetrated the child’s intestine, and within the space of a few hours would have magnetized with the balls located in the stomach, risking inflammation of the lining of the inner wall of the abdomen. Had this occurred, the boy would have faced extreme pain, and could have died.

However, because the parents made it to hospital in time, and the doctors’ quick reaction time, the boy was saved, and complications were avoided.

Andrei Karavaev, the hospital’s chief surgeon, explained that the operation was extremely difficult to pull off. “If the magnets had stuck together, clinching the intestinal wall, they would no longer be able to separate on their own. Multiple perforations would occur, leading to peritonitis.”

Unfortunately, Dr. Karavaev said, instances of children swallowing the popular magnetic toy were not at all uncommon. “In the past four years, we’ve had over 10 cases of this kind…As a doctor who observes the effects of swallowing magnets…I would ban the sale of such toys,” he said.

The surgeon said that even older children sometimes have a mysterious fascination with the gleaming magnetic balls. “In our practice there was a case when a 12-year-old child swallowed 87 such balls,” he said.

Neodymium magnet toys usually consist of between 100-200 small metal balls with a very powerful magnetic field. The toy appears regularly in media reports as some small children seem to have an irresistible urge to swallow them. The dangers posed have prompted some parents to call for them to be banned from sale.

In 2013, the US Consumer Product Safety Commission said nearly 3,000 emergency room visits were reported as a result of “ball-shaped” or “high-powered” magnet-related maladies. The balls are banned in Australia and New Zealand, with US lawmakers proposing to do the same.