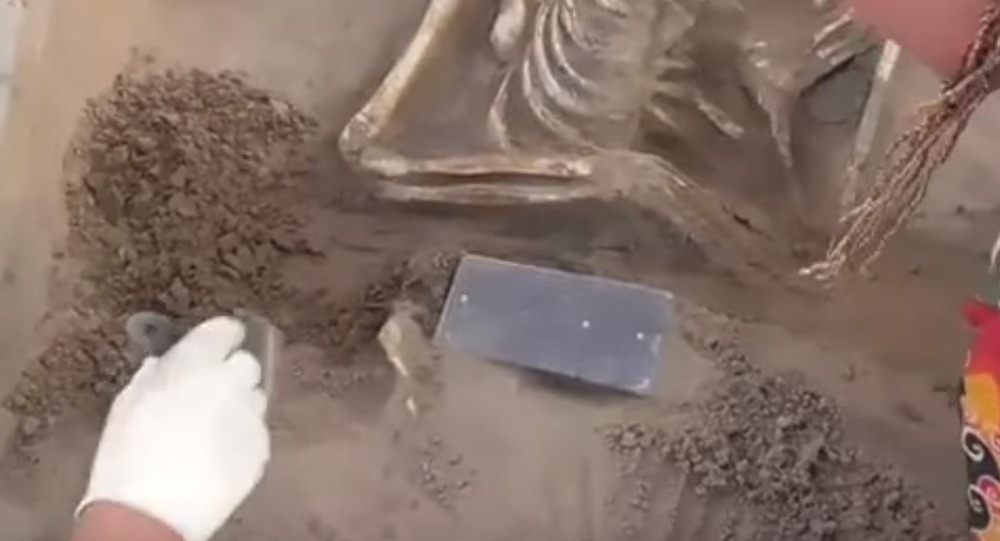 The jet black, rectangular-shaped object, uncovered along with the remains of a women belonging to an ancient nomadic tribe thought to have inhabited the eastern Eurasian Steppe from the 3rd century BC to the 1st century AD, was found at a dig site dubbed ‘The Russian Atlantis’, known as such because the site is above water for archaeologists to explore for only a few weeks each year.

Archaeologists working at a site in a mountainous region of Russia’s Tuva Republic, a Siberian region just north of western Mongolia, have discovered a curious black gemstone-encrusted rectangular object at the burial site of an ancient Xiongnu-era woman, The Siberian Times has reported.

The 18x9 cm (7x3.5 inches) object, thought to have been used as an ornate belt buckle, was discovered with an ancient woman, with other objects including ancient clay pots found nearby.

The buckle, said to have been made of jet, a gem precursor to coal, was encrusted with turquoise, carnelian and mother-of-pearl gemstones. The belt was also decorated with Wu Zhu coins, an ancient Chinese currency produced between 118 BC and 621 AD, with archaeologists therefore calculating that the belt and its buckle could be over two thousand years old.

The relics were discovered in the Sayan Sea – a giant man-made reservoir along the Yenisei River upstream from the massive Sayano-Shushenskaya Dam, which dries up in the spring and early summer of each year, exposing an impressive collection of remains dating back to the Bronze Age.

Dr. Pavel Leus, an archaeologist from the team studying the site, said that the “Xiongnu-era iPhone” buried alongside the ancient remains, which the team affectionately nicknamed “Natasha,” “remains one of the most interesting [finds] at this burial site.”

Over a hundred other sites, many of them well-preserved, have been counted at the Sayan Sea site, with Marina Kilunovskaya, head of the Tuva Archaeological Expedition, calling it a “scientific sensation.”

“We are incredibly lucky to have found these burials of rich Hun nomads that were not disturbed by (ancient) grave robbers,” she explained.

Situated some 3,700 km east of Moscow, the Tuva region is known for its pristine wilderness, clean air and rich forest resources.

Tuva: A Land of Wonders in Russia's Southern Siberia

WATCH Putin Chill in Tuva Forest During His Trip to Siberia