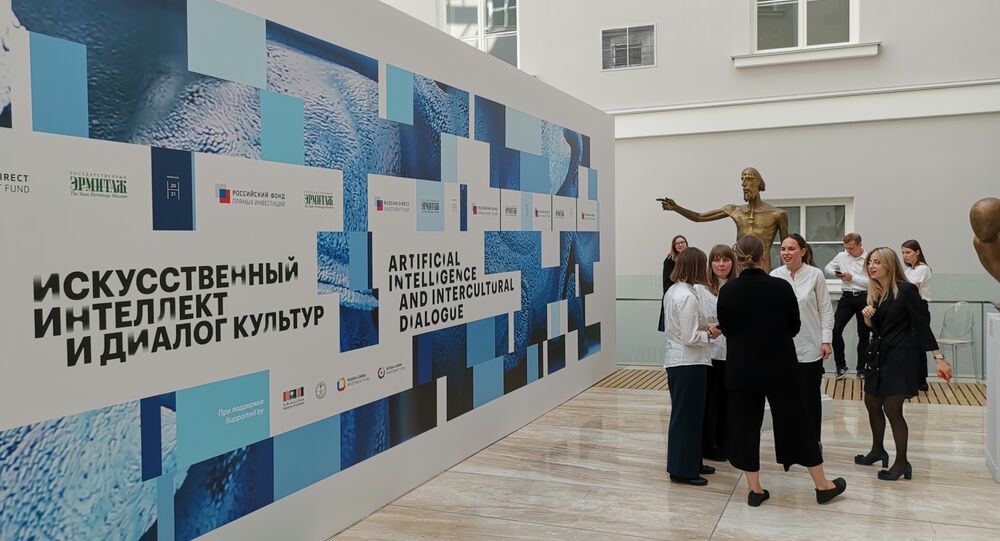 An unusual mix of contemporary art and AI technology is on display at the State Hermitage Museum in St. Petersburg. The exhibition – part of the SPIEF’19 cultural programme – is a joint effort of the Russian Direct Investment Fund and its foreign partners.

If you think about the concept of artificial intelligence, you'd probably connect it in your mind with certain areas of human activity – complex calculations, banking and finance, linguistics or facial recognition. Now AI is also storming other frontiers, such as transforming traditional works of art into strange and complex masterpieces.

'Dreams of a machine', AI-enhanced images, give an example of what goes on in the mind of a computer. On display at State Hermitage in St. Petersburg now. Really worth watching. pic.twitter.com/r7k8ASJziu

​Besides AI-enhanced art from France, Italy, Russia, and China, on display at the State Hermitage Museum are also works from two female artists from Saudi Arabia - Lulwah al-Homoud and Daniah al-Saleh.

​"We are taking part in the opening of yet another bridge – a cultural bridge between Russia and the rest of the world”, says Saudi Arabia’s Minister of Energy, Industry and Mineral Resources Khalid Al-Falih. “We stress the importance of cultural dialogue, which also uses newest technology, such as artificial intelligence. It all serves the main goal – to reach mutual understanding and prosperity for the people of Russia and other countries, including the Middle East and Saudi Arabia".

Saudi Arabia has been strengthening ties with Russia recently, with cultural dialogue playing a key role. The exhibition in St. Petersburg is Russia’s first major international art show exploring the role of AI. The Russian Direct Investment Fund (RDIF), which organised the event together with the State Hermitage, sees big potential in art as a form of diplomacy:

"We see great interest in AI in the world", says Russian Direct Investment Fund CEO Kirill Dmitriev. "It’s not a coincidence that artists from 12 countries are taking part in the exhibition. It’s an example of cooperation between AI and humans, but also - a joint effort of our countries, because we are certain that art unites people, and unity is very important".

The RDIF and its international partners are already investing in AI technologies. According to a recent McKinsey and Company report, the use of artificial intelligence will add $13 trillion to the global economy by 2030. The fund, which is headquartered in Moscow, has already implemented more than 70 projects all over Russia in cooperation with its foreign partners.

The 23rd St. Petersburg International Economic Forum kicked off on Thursday, 6 June with more than 17,000 delegates from 75 countries in attendance.