MOSCOW (Sputnik) - Residents of Yekaterinburg, Russia's fourth largest city, continue to protest the construction of a Russian Orthodox cathedral in a park square in the city centre, with the Ministry of Public Security of the Sverdlovsk Region reporting that 26 people were detained during the most recent rally on Tuesday.

Thousands of Yekaterinburg residents gathered near the Sverdlovsk Drama Theater on Tuesday for their second rally this week to express their outrage over the planned reconstruction of St. Catherine's Cathedral, which was destroyed by the Soviet authorities in 1930. The new church is expected to be finished by 2023, which will mark the 300th anniversary of the founding of Yekaterinburg.

The first protest took place at the construction site on Monday. Sverdlovsk Region Governor Yevgeny Kuyvashev said that activists got into altercations with guards, toppled a fence and demanded that the authorities preserve the city park. Meanwhile, member of the Sverdlovsk Region Civic Chamber Alexander Levin noted that police acted appropriately during these protests.

The governor said that the church situation was complicated, admitting that the feelings of both the advocates of the church's reconstruction and the protesters striving to save green spaces in the city were understandable, and called for a dialogue between the project organizers and demonstrators. However, after the authorities held separate talks with both sides of the public, they announced that the project would continue.

Tensions around the issue arose in 2010 when the Yekaterinburg Eparchy of the Russian Orthodox Church announced it would rebuild the destroyed cathedral. The news was met with a mixed public reaction, and the authorities had to change the site for the future cathedral several times — initial plans included having the church in the city's Labor Square or on the water. These plans were later abandoned due to protests. 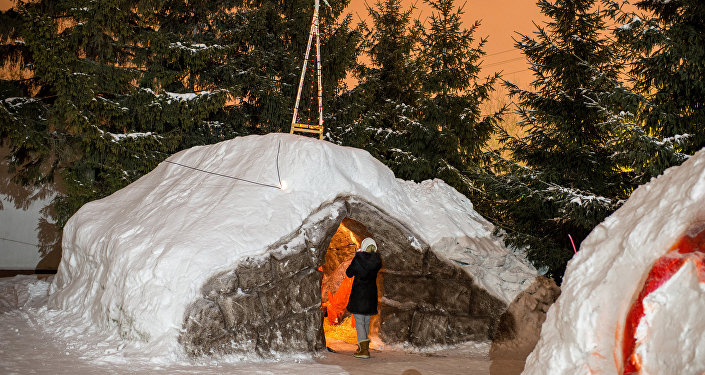 © Sputnik / Alexei Malgavko
WATCH: Orthodox Christmas Midnight Mass at Church of Nativity in Bethlehem
The most recent decision to rebuild the church in the park was also not supported by the people because they opposed the city cutting down trees and greenery. However, the St. Catherine Foundation, the initiator of the project, said that all the necessary legal procedures had been carried out, and on April 25 the Ministry of Construction and Infrastructure Development of the Sverdlovsk Region had issued a construction permit for the project.

Commenting on the issue, Kremlin spokesman Dmitry Peskov said that problems surrounding the project should be resolved by the regional authorities but that Moscow was monitoring the situation. Peskov also noted that the Yekaterinburg authorities' attempts to establish a dialogue between protesters and builders were "proper."

Russian High Commissioner for Human Rights Tatiana Moskalkova said on Tuesday that she would follow the protests in Yekaterinburg and work out the issue. At the same time, ombudswoman of the Sverdlovsk Region Tatyana Merzlyakova stressed the local authorities should learn lessons from the people's outcry and engage in the negotiating process between the protesters and authorities in a timely manner to resolve the problem.

St. Nicholas Relics to Be Brought to Russia From Italy - Church Official