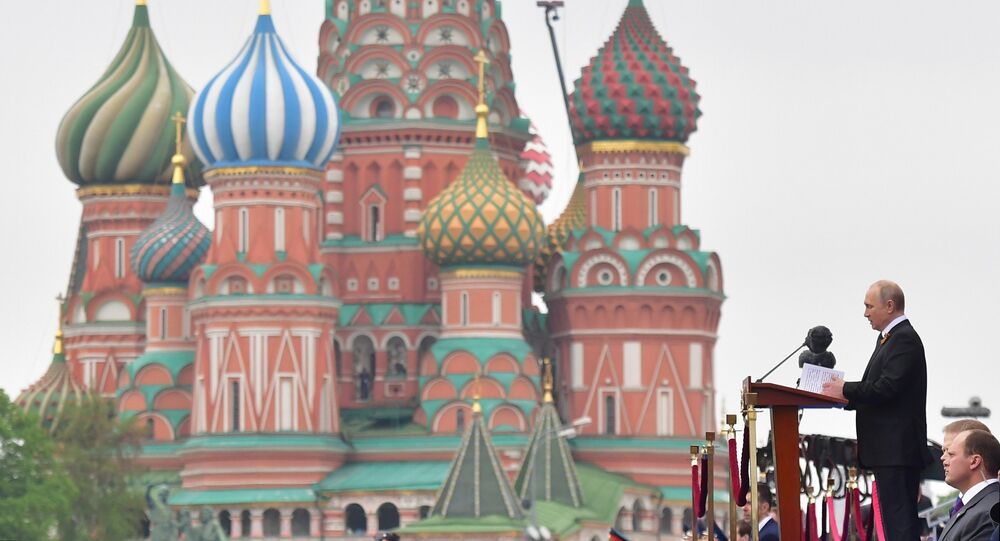 A military parade to commemorate the 74th anniversary of the Soviet victory over Nazi Germany in the 1941-1945 Great Patriotic War was held on Moscow’s Red Square on 9 May. The parade showcased sophisticated Russian military hardware, including tanks and missile systems.

Interestingly, Russian-made Aurus luxury cars were for the first time used during the parade to transport Russian Defence Minister Sergei Shoigu, who inspected the event, and Oleg Salyukov, commander-in-chief of the Russian Ground Forces, who was in charge of the parade.

Aurus vehicles are part of the Kortezh project, which envisages the creation of luxury cars for top state officials. The cars, which are on a par with foreign analogues in terms of performance characteristics, are already used by Russian President Vladimir Putin and the country’s Federal Protective Service.

Undoubtedly, one of the parade’s highlights was Russia's T-14 Armata, the world's only post-war third-generation tank.

The T-14 features an unmanned, remote-controlled turret, while the crew is protected within an armoured capsule. The tank’s weapons include a 125-mm smooth-bore cannon and a 7.62-mm remote-controlled machine gun.

© Sputnik / Aleksandr Vilf
Russian T-14 Armata main battle tanks roll down the Red Square during a rehearsal for the Victory Day parade in Moscow on 9 May, 2019

© Sputnik / Aleksandr Vilf
The S-400 missile systems during a military parade in Moscow on 9 May, 2019

With a range of up to 600 kilometres and an effective intercept altitude of up to 27 kilometres, an S-400 unit can reportedly handle up to 72 missiles simultaneously, flying at 36 different aerial targets.

© Sputnik / Aleksandr Vilf
A Russian RS-24 Yars intercontinental ballistic missile system rolls down the Red Square during the Victory Day parade in Moscow on 9 May, 2019

The RS-24 Yars is an upgraded version of the Topol-M ballistic missile, that can be fired both from a mobile launcher and silo. It carries ICBMs with multiple, independently targetable nuclear warheads and has a range of 11,000 km (6,800 miles).

In the run-up to the start of the parade, Russian President Vladimir Putin delivered a speech, paying tribute to all those who gave their lives to defeat Nazi forces in the Second World War.

© Sputnik / Aleksey Nikolsky
Russian President Vladimir Putin delivers his speech during the Victory Day parade at the Red Square in Moscow on 9 May, 2019

He warned against deliberate attempts by some countries to distort WWII events, stressing that “our sacred duty is to protect genuine heroes”.

“You live in different countries, but the feat that you accomplished together cannot be divided. We will always honour all of you and the victory, which was and remains the same for everyone”, Putin underscored. Separately, he pointed out that Russia is open to cooperation with those who are ready to fight extremism and terrorism.

Some military units took part in the Moscow Victory Day parade for the first time in history: women serving in the armed forces from the Zhukov Air and Space Defence Academy as well as womens' cadets corps of the Russian Investigative Committee.

© Sputnik / Aleksandr Vilf
Female service members of the Zhukov Air and Space Defence Academy during the Victory Day Parade in Moscow on 9 May, 2019

Also appearing for the first time in the event was a National Guards Forces unit from the Saratov Military Academy and cadets from the Moscow University of the Russian Interior Ministry.