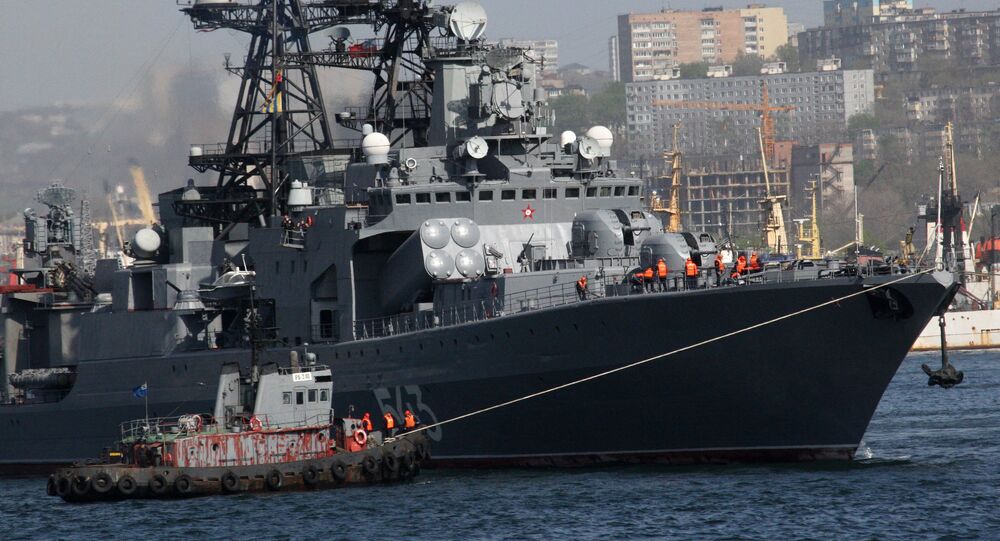 VLADIVOSTOK, February 16 (Sputnik) - The fire that broke out early on Friday on board a Russian destroyer at a ship repair yard in the Russian city of Vladivostok started during welding works, Pacific Fleet spokesman Capt. 2nd Rank Nikolai Voskresensky said.

Early on Friday, a fire broke out on board Marshal Shaposhnikov destroyer at Dalzavod ship repair yard. According to the Far Eastern Shipbuilding and Ship Repair Center (FESRC), the fire area was not large and the fire only spread to the vessel's topside. As of 7:00 a.m. Moscow time (4:00 GMT) the fire has been completely put out.

"A fire broke out in one of the bow rooms of the Marshal Shaposhnikov destroyer, which is currently being repaired at Dalzavod ship repair yard, during welding… The crew has been evacuated following fire-detection, no one has been injured," Voskresensky said.

© Flickr / Trondheim Havn
Cruise Ship in Trouble off Moroccan Coast Following Fire in Engine Room
Thick smoke was seen billowing from the Pacific Fleet’s warship. A Vladivostok rescue center official told Sputnik the crew had been evacuated and there had been no casualties.

The FESRC suggested the fire had started above the main deck and was confined two several compartments. The ship was being overhauled and had been stripped of essential equipment. A preliminary inquiry concludes the fire started in the ship’s isolation.

Voskresensky also noted that the destroyer had been handed over to the ship yard for repair work in 2015.

One Man Dead After Turkish Vessel Comes Under Fire Near Libya