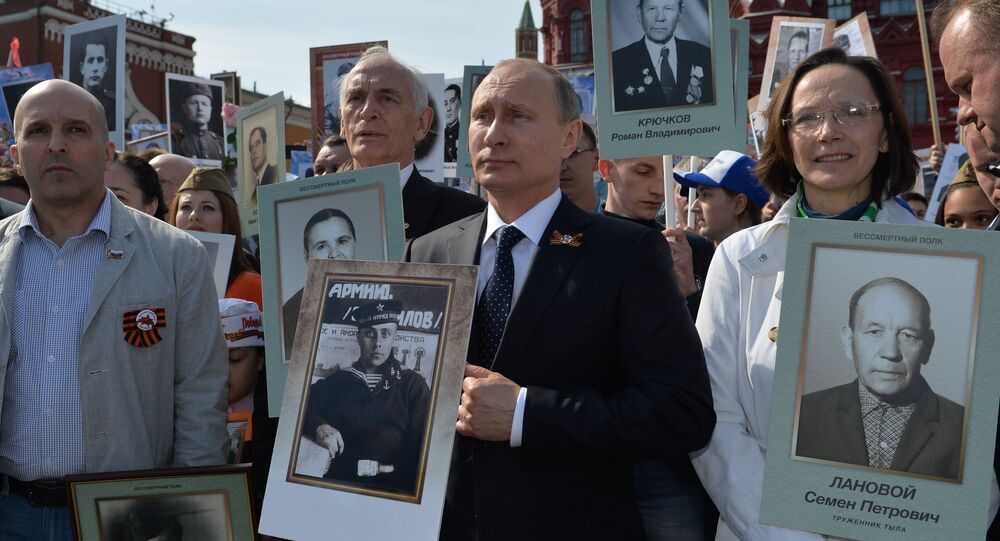 President Putin has provided new details on his father's wartime service during a speech at the Russian Volunteer-2017 ceremony on Wednesday.

Speaking at the forum, Putin revealed that his father went to the front voluntarily, even though he had the opportunity to remain on the home front.

"The great history of Russia lies in the heroic impulse of volunteers who defend their fatherland. Just now we were remembering the Great Patriotic War. I remember that my father, Vladimir Spiridonovich Putin, having in his hands an exemption from active duty which would have allowed him to work in the rear, volunteered for the front," Putin said.

A veteran of the Red Navy's submarine fleet in the early 1930s, Putin's father joined up with the 330th infantry Regiment of the 86th Division of the Red Army starting in the summer of 1941, almost immediately after the start of the war. A resident of Leningrad, Vladimir Spirdonovich fought to defend the Nevsky Pyatachok River Neva bridgehead, an area about 50 km southeast of the city where the Red Army successfully fought off unrelenting Axis attacks.

© Sputnik /
This Literal 'Road of Life' Helped Leningrad Withstand the 900 Day Nazi Siege (VIDEO)
Vladimir Spirdonovich was heavily wounded by a splinter to his left shin and foot on November 17, 1941. For his wartime service he was awarded the metals 'For Military Merit', 'For the Defense of Leningrad' and 'For Victory Over Germany'.  In 1985, on the 40th anniversary of victory, he was awarded the Order of the Patriotic War, 1st Class. He passed away on August 2, 1999, shortly before his son was selected as president Boris Yeltsin's successor.

In 2015, on the 70th anniversary of the victory over fascism, President Putin joined over 750,000 Muscovites as they marched to commemorate loved ones who fought in the Great Patriotic War, the term used in Russia and across the former USSR to refer to the Eastern Front of World War II.