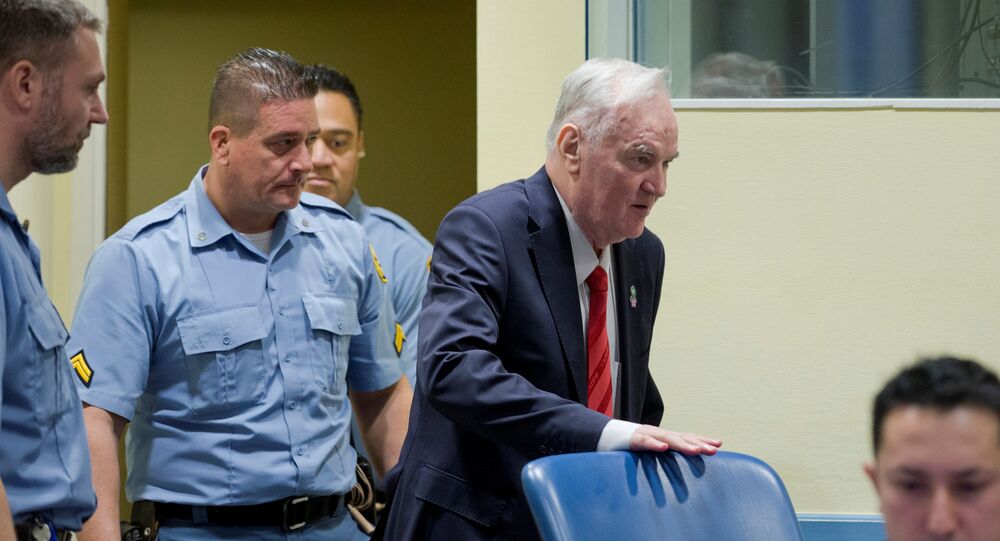 Former Bosnian Serb army chief Ratko Mladic, who has denied all accusations, has been sentenced to life imprisonment.

"We have to state one more time that the ruling of conviction delivered by the International Criminal Tribunal for the Former Yugoslavia [ICTY] to Mr. Mladic, the former chief commander of Republica Srpska's armed forces, is the continuation of a politicized and biased policy that has prevailed in the activities of the ICTY from the very beginning," Russian Foreign Ministry spokeswoman Maria Zakharova has stated.

According to Zakharova, the tribunal used a biased and anti-Serb interpretation of the events that took place in the region, undermining the process of restoring mutual trust between the Balkan nations.

#Zakharova: We have to state that the ICTY's guilty verdict against former Bosnian Serb military leader Ratko Mladic continues the politicised and biased course that has prevailed in the tribunal's process pic.twitter.com/G0gYjZ2KkA

Previously, Russia vetoed a UN resolution describing the Srebrenica massacre as a "crime of genocide" since Moscow argued that the war in Yugoslavia saw the crime of ethnic cleansing committed by all warring sides and not by the Bosnian Serbs alone.

© AFP 2020 / Oliver Bunic
Mladic's Sentencing and ICTY's Double Standards in Conviction
Zakharova's statement comes after the International Criminal Tribunal for the Former Yugoslavia announced on Wednesday its verdict in the trial of former Bosnian Serb army chief Ratko Mladic, charging him with having committed what was described as "genocide," war crimes and crimes against humanity during the 1992-1995 war in Bosnia. Mladic, whose trial began in 2012, has denied all accusations, while his lawyers insisted that he did not order the Srebrenica killings, calling the trial biased.

In December 2016, prosecutors demanded a life sentence for Mladic for his role in the alleged killing of 8,000 Muslim men and boys during the July 1995 Srebrenica massacre, for the protracted siege and bombardment of the Bosnian capital of Sarajevo and the "ethnic cleansing" of Muslims and Croats in other areas.