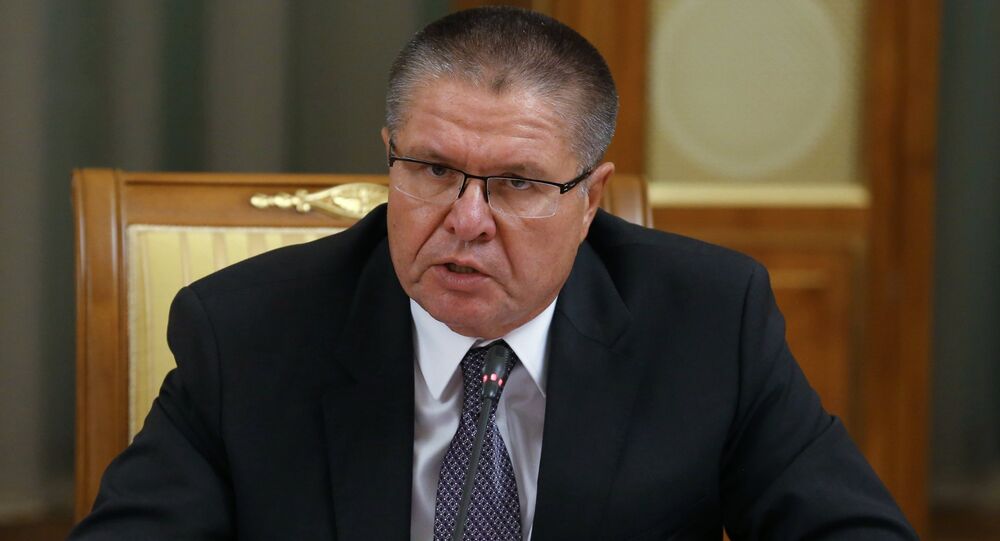 MOSCOW (Sputnik) – The Investigative Committee said in November that Ulyukayev was caught in the act of accepting a $2-million bribe for a positive appraisal that allowed Russian energy company Rosneft buy state shares of the Bashneft oil company. Ulyukaev, 61, who denies his guilt, is facing up to 15 years in prison.

© Sputnik / Iliya Pitalev
Moscow Court to Begin Hearings in Ex-Minister Ulyukaev Case August 8
Both witnesses, Andrey Baranov, the director of the department for investor relations at Russia’s Rosneft oil corporation, and Oksana Tarasenko, Russian Economic Development Ministry’s corporate governance department head, considered Ulyukayev's actions during Rosneft’s purchase of the state-owned share in Bashneft company as strange and inconsistent. They were surprised that Ulyukayev's behavious was inconsistent, with the official sometimes speaking against Rosneft’s participation in the deal and sometimes saying he sees no problems with it.

Both witnesses gained information from media reports. Baranov was not an eyewitness, while Tarasenko participated in a number of talks and document preparations.

Tarasenko said that Ulyukayev was aware of the possible Rosneft participation in Bashneft’s privatization from the very beginning.

She said that on July 29, 2016, Russian Deputy Prime Minister Arkady Dvorkovich asked the ministry to carry out an analysis whether non-state companies can buy Bashneft’s shares.

“Later Ulyukayev held consultations with VTB [bank] discussing the possible participation of Rosneft. The conclusion was that Rosneft was not banned from participating in the deal,” Tarasenko said.

She pointed out that Ulyukayev made a statement that Rosneft could not purchase Bashneft shares after the consultations.

“I knew his position from media reports. I was very surprised,” Tarasenko said.

The witness noted that Ulyukayev had never spoken about his position on the deal with the ministry’s staff.

“Ulyukayev has never told me his position on Rosneft’s participation in Bashneft privatization. He has not told other employees that Rosneft must be excluded from the list of candidates. We knew his point of view from the press,” she said.

Tarasenko said that, according to further media reports, the deal on Bashneft privatization was suspended. At the same time, the ministry was tasked by Russian Prime Minister Dmitry Medvedev to elaborate on the ways of selling Bashneft’s shares.

The witness is not sure whether the suspension of privatization was linked to the government’s request. She also failed to make it clear whether the Economic Development Ministry had a right to suspend privatization of a state-owned company.

Tarasenko said that the former minister had not asked her to delay the purchasing of Bashneft shares and made no orders on the issue.

The prosecution was not satisfied with her remarks and asked for an opportunity to read out her earlier testimony.

“When after all adjustments, Ulyukayev was given a draft report [on Bashneft privatization] on a stamped paper, he personally edited out the phrase that Rosneft’s participation would give an additional impetus to the competition,” the protocol of Tarasenko’s questioning said.

She failed to answer the questions whether this remark was relevant, whether it had key importance and whether the government asked the ministry to assess the competitiveness of Rosneft.

© AFP 2021 / Tobias SCHWARZ
Merkel Slams Ex-Chancellor Schroeder's Intention to Join Rosneft's Board
Baranov said he did not personally know Ulyukayev and knew about his arrest from media reports.

The Rosneft official said that he was working on “completing the deal until the end of 2016.” He pointed out that the agreement was profitable for the state.

During this work, Rosneft CEO Igor Sechin wrote a letter to Russian President Vladimir Putin asking him to consider the opportunity of the company’s participation in Bashneft privatization. Baranov took part in preparing this letter containing “financial and economic analysis of why Rosneft was the better candidate to purchase this package of shares.”

From media reports Baranov also knew that Ulyukayev had said in August 2016 that Rosneft was not a relevant purchaser as it was controlled by the state.

This point of view was also shared by first deputy Energy Minister Alexey Texler, who, according to Baranov, had a conflict of interest in the case.

“Obviously, the change of an owner causes a change of the board of directors. He was a member of the board and therefore had a conflict of interest,” Baranov said.

The witness added that that from his point of view Ulyukayev had been looking for opportunities to exclude Rosneft from the privatization deal but failed to explain what his opinion was based on.

During the hearing, the court wants to question 30 witnesses. A court press secretary said that Sechin, who is said to have given Ulyukayev $2 million at Rosneft’s headquarters, was also on the list of witnesses. The former minister’s lawyer said that ex-intelligence officer Oleg Feoktistov, who is accused by Ulyukayev of staging a provocation that resulted in his arrest, would also be questioned.

Ulyukayev believes that Sechin and Feoktistov personally organized the provocation with Rosneft’s CEO having made a “false denunciation.”

The former minister said that the “transfer of a bag [with money] was preliminarily planned by employees of the Russian Federal Security Service [FSB],” who were “basing on Sechin’s false denunciation” and waited for Ulyukayev’s proposal on the bribe.

“Understanding that there will be no demands, Sechin called me and persuaded me to come to Rosneft under the pretext of holding a discussion of important and urgent issues related to the company’s activities and the wish to show me the company,” Ulyukayev said.

According to media reports, Feoktistov served in the FSB until August 2016 and after that worked in Rosneft as a head of the security service and the company’s vice president. In March, Sechin said that Feoktistov had returned to the FSB. According to a source of Sputnik, Feoktistov wants to resign and retire.