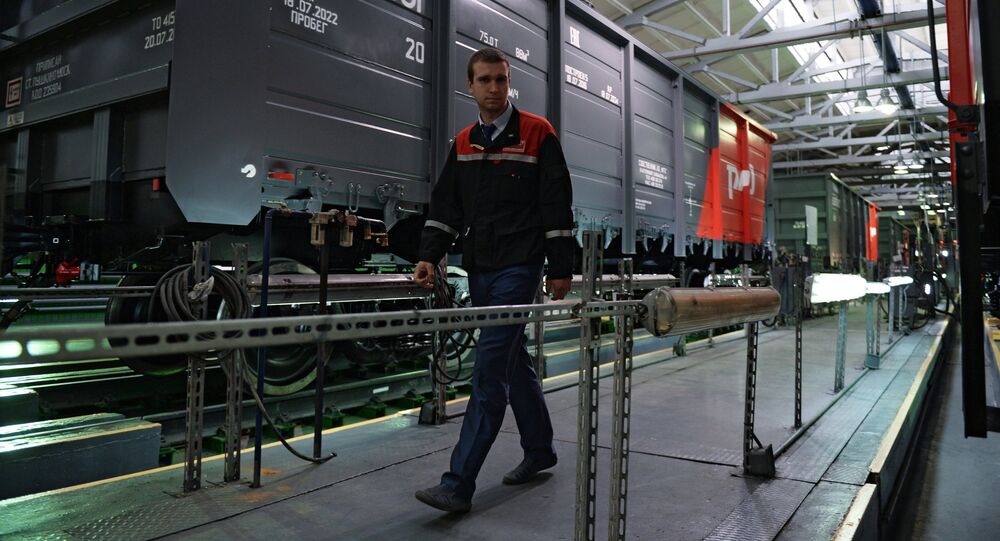 Not by Arms Alone: What is the Purpose of Russian Defense Sector Reform?

With non-military products due to account for 50 percent of the goods the Russia's defense industry produces by 2030, Sputnik looks into the main goals of Russia's reforms to the country's military and industrial complex.

© Sputnik / Sergey Mamontov
Deputy PM: Russia Pulls Crimean Defense Enterprises Out of Crisis Over Two Years
In the next few months, the Russian Industry and Trade Ministry is set to develop a portfolio of projects which could be produced by the country's military and industrial complex (MIC).

The Ministry, which is allocating about four billion rubles for the purpose, is due to prepare proposals that will increase the output of civil and dual-use products. In particular, the proposals stipulate that military goods account for only 50 percent or less of the Russian defense industry's manufacturing capabilities.

Oleg Bochkarev, deputy head of the Russian Military and Industrial Commission, said that in addition to subsidies and investments in the Russian defense industry, which is highly dependent on the state, it is important to begin adapting to the realities of the market.

Gazprom indicates it extends its cooperation with the Russian military-industrial complex.

To this end, he believes the defense industry needs to introduce new business models and marketing strategies, and hire specialists with experience in the civil sector.

"Nowadays, marketing in the defense sector is referred to as lobbyism, namely, the ability to work with a customer, and knock out an order and a good price. This is not marketing as such. We will need specialists and we should search for them in the civil sector, which is a tricky task," Bochkarev was quoted by RT as saying.

Sergey Menyailo, Plenipotentiary Representative of the Russian President in the Siberian Federal District, sees a way out in simplifying the procedure defense enterprises use to establish subsidiaries.

"Each enterprise in the military-industrial complex should be able to implement a program to increase the returns on equipment not involved in the State Defense Order," Menyailo said.

© Sputnik / Nataliya Seliverstova
Russia's 2016 State Defense Order 96% Complete - Prosecutor General
He urged the Russian defense companies to participate more actively in the creation of industrial clusters on the basis of their own assets. As an example, Menyailo pointed to the private industrial park Novosyb, which was created on the basis of the closed joint-stock company Novosibirsk Cartridge Plant.

The idea of diversifying the Russian defense industry was set into motion by President Vladimir Putin at the congress of the Union of Machine Builders on April 19, 2016.

According to him, Russia should start making competitive high-tech consumer goods at the country's MIC facilities, something that he specifically underscored during his direct line on April 14, 2016.

"Putin made it clear that the volume of the State Defense Order will be reduced in parallel with defense spending. Already in the near future, arms manufacturers will receive fewer orders from the Defense Ministry and law enforcement agencies. Russia will reduce defense spending to 2.7-2.8 percent of GDP in 2018," RT said.

Putin urged executives within the Russian defense sector to begin adapting to new economic realities. In his opinion, the MIC should increase its production of dual-use and civilian goods in order to foray into new markets.

The President stressed that the state invested in the purchase of  expensive state-of-the-art equipment and that in this regard, the MIC should focus on meeting the needs of medicine, energy, aviation and shipbuilding, as well as space, information technology and telecommunication sectors.

Konstantin Makienko, deputy head of the Moscow-based Center for the Analysis of Strategies and Technologies, welcomed Russian authorities' push for a 50-increase in the share of civilian products in the defense industry. In his opinion, it is the optimal balance given the specifics of this sector.

"Our defense industry has always made products for civilian needs, but now we are talking about a significant increase in this volume. I am sure that the heads of the companies know perfectly what they need to produce and in which markets these products will be in demand," Makienko told RT.

© Sputnik / Mikhail Klimentyev
Russia’s Operation in Syria Boosted Country’s Defense Industry - Putin
At the same time, the expert underscored that the conversion process should not be applied to specialized arms makers, including the manufacturers of ammunition, which Makienko said "should remain state institutions."

According to him, the success of the conversion mainly depends on the amount of cheap financial resources that will be provided to the defense industry. Makienko urged the government to give defense companies preferential loans and limit the supply of competing imports.

"The state made excellent use of sanctions in agriculture. Why don't we limit the import of Boeing and Airbus aircraft now? The state has enough leverage to stimulate purchases of domestic civil aircraft. The same goes for other spheres, and opportunities in this regard are very wide," he concluded.