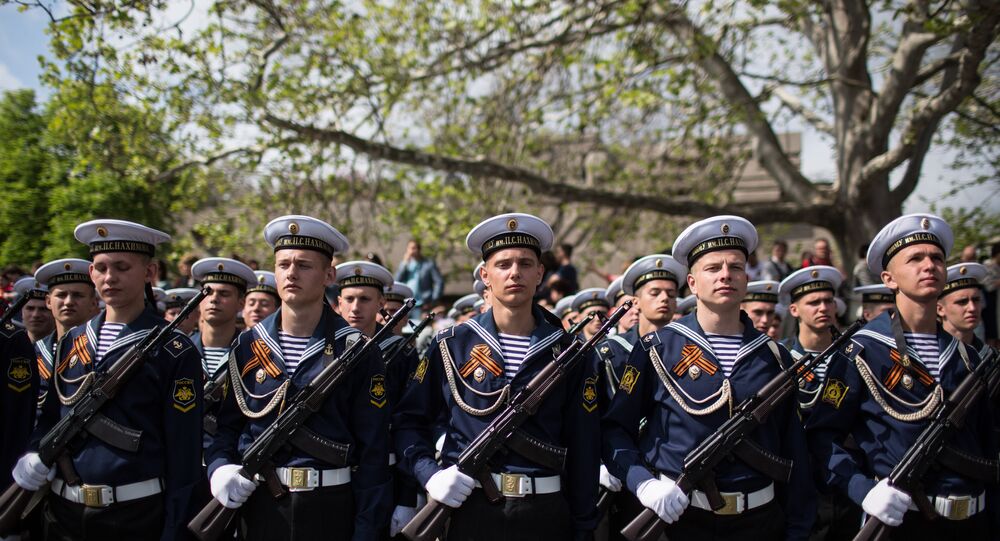 The Victory Day parade in Crimea's Sevastopol gathers thousands of participants and spectators this year.

© Sputnik / Vladimir Astapkovich
'Immortal Regiment' March in Moscow During Victory Day Celebrations (VIDEO)
SEVASTOPOL (Sputnik) — The Victory Day is traditionally celebrated with a parade in Crimea's Sevastopol, with this event and the "Immortal regiment" march gathering thousands of participants and spectators this year.

The celebration began with naval flags being hoisted up on the ships of the Black Sea Fleet. Thousands of people came to the city's central Lenin Street in advance to find the best spots to see the parade.

Black Sea Fleet Commander Adm. Aleksander Vitko overseeing the parade congratulated people on the victory and reminded them of its price, the lives that were given to achieve it.

The troops went past a special stand where veterans and participants of the war were seated as well as the regional officials.

The members of the National guard of Russia and Yunarmia youth movement as well as students of the Nakhimov Naval School took part in the parade for the first time. The participants of a convention for young seamen joined the parade dressed in sailors' uniforms. Servicewomen from the reconnaissance unit of the Black Sea Fleet were met with applause.

© Sputnik / Sergey Averin
Some 50,000 People Partake in Victory Day Celebrations in Ukraine - Official
The military equipment followed the troops. The Lynx, Tiger and Typhoon armored vehicles, took part in the parade, the latter for the first time.

These vehicles were followed by various artillery and anti-aircraft defense equipment, from the 9K38 Igla portable air missile to the Pantsir-S and S-300 anti-aircraft missile. The spectators were most interested in the Bastion-P mobile coastal defense missile system with its Monolit and Mineal radars.

Over 1,300 troops and over 40 units of military equipment and technology were involved in the parade.

The most advanced military vehicles were followed by the vintage technology of the World War II and post-war period.

Veterans, representatives of veteran organizations, members of military reserve forces then marched along the street, cheered on by the spectators.

The people carrying photographs of their relatives fallen in the war then joined the march of the "Immortal Regiment," which gathered about 30,000 people, according to the organizers.

The celebrations will conclude with firework over the Bay of Sevastopol.