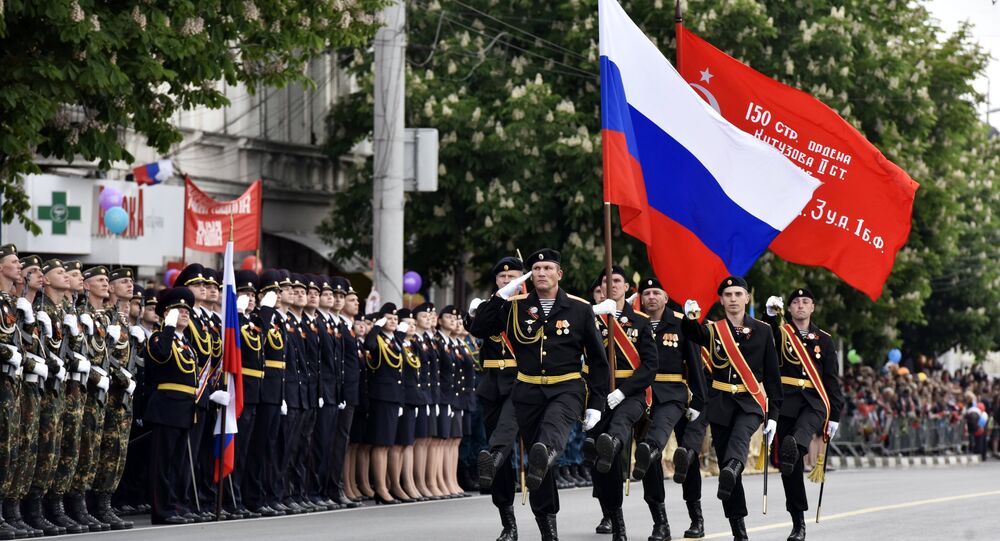 Simferopol, the capital of Russia's Republic of Crimea, on Tuesday hosted its first military parade ever to honor the 72nd anniversary of the Victory over Nazi Germany in the Great Patriotic War.

© Sputnik / Igor Bashkovityi
'Immortal Regiment' March Participants, Radicals Clash in Ukrainian Kharkiv
SIMFEROPOL (Sputnik) — The parade, involving some 1,000 troops and 38 units of military equipment, began at 10 a.m. local time (07:00 GMT) with the performance of the Russian anthem and a minute of silence to honor the memory of the victims of the Second World War.

Republic of Crimea Head Sergey Aksenov and Speaker of Crimea's State Council Vladimir Konstantinov oversaw the procession, with thousands of local residents attending as spectators and veterans as special guests.

"The military parade was held [here] for the first time today. This is a landmark event for us because there has never been anything like that in Simferopol, as far as I can remember," Aksenov told reporters.

The head of the republic noted that the region was taking special care about the veterans, who are participants of a special financial aid program.

The "Immortal regiment" commemorative march began after the military parade, with the Crimeans carrying the pictures of their relatives toward the Eternal Flame memorial and flowers to the Unknown Soldier tomb.

The Victory Day's celebrations will conclude with fireworks.