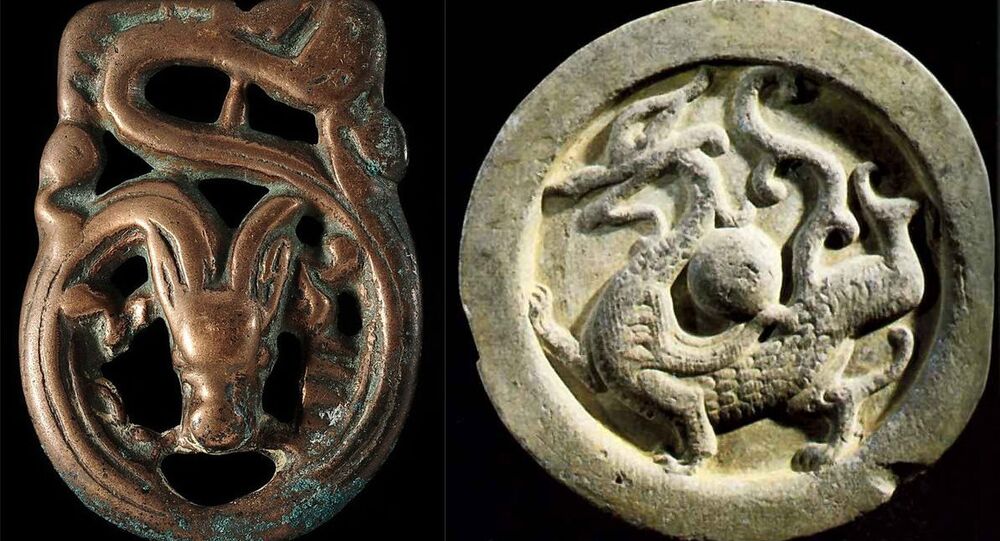 Dragons of Siberia: Scientists Reveal Mythical Creature Once Lived in Russia Too

The legendary dragon was long thought to be mostly a feature Chinese and other Asian countries' folklore, but Russian scientists have found pictured of these mythical creatures on the ancient belt-plaques found in South Siberia, suggesting that dragons once inhabited Russia (or at least Russia's imagination).

© Photo : Courtesy of Olga Poshekhonova
Scientists Discover 17th Century Coins of French King in Siberia (PHOTO)
Detailed research of bronze belt-plaques, which were found back in 1970 in South Siberia as part of the so-called 'Iyus cache', have given researchers reason to believe that dragons had a unique role to play in Russia's own myths and legends, the Science of Siberia magazine of the Siberian department of Russia's Academy of Sciences reports on Tuesday.

Dragons depicted on the belt-plaques are shown in motion, as if curling spirally, as opposed to the traditional Chinese dragon which is often shown moving in a zigzag fashion.

The image of a dragon served as a talisman and was supposed to protect the owner from danger, researchers suggest. Belt-plaques found in different caches differ in both their size and details, which lead the scientists to believe that they were manufactured in series but according to a single canon.

© Sputnik / Nik Pavlov
Novosibirsk: Where Big Isn’t Enough
"Even though the territory of South Siberia was under a strong Chinese influence, the belt-plaques with dragon images were most likely made locally and not copied from Chinese designs. The figure of a dragon might have been a sign typical to this cultural territory," suggested Andrei Borodovsky, a researcher from the Institute of Archaeology and Ethnography of the Siberian branch of Russian Academy of Sciences.

The Iyus cache was named after the settlement in South Siberia where it was found. The most ancient caches found in the region date back to the Mesolithic epoch, which are much rarer finds than caches the early Iron Age.