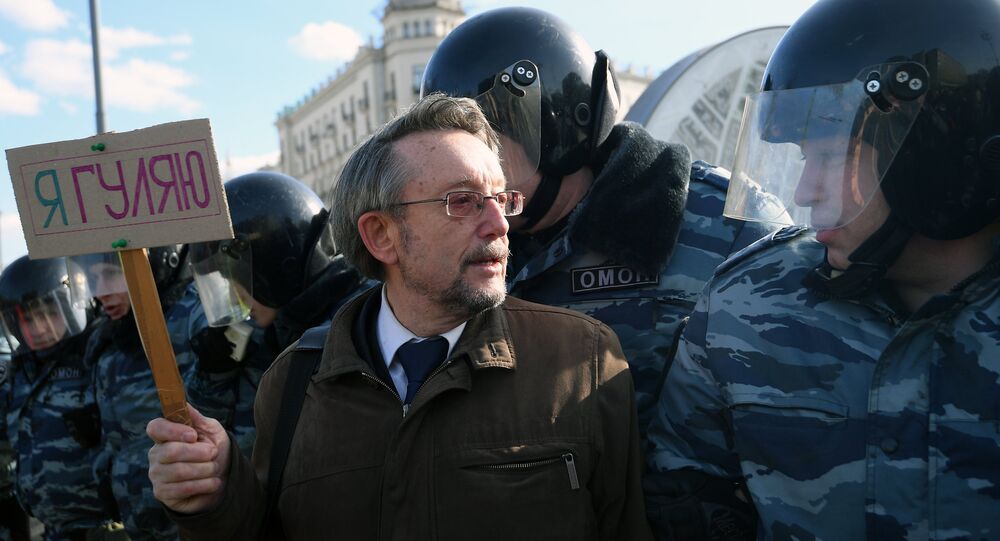 Western politicians' calls to Russia regarding the participants of an unsanctioned rally in Moscow are politicized to put pressure on intra-political life of the country, Russian President Vladimir Putin said Thursday.

ARKHANGELSK (Sputnik) – On Sunday, Russian opposition figure Alexey Navalny organized an anti-corruption rally without the permission of Moscow authorities in the Russian capital, which was attended by approximately 8,000 people, with over 600 people, including Navalny himself, being detained by police. Similar rallies also took place in St. Petersburg, Voronezh, Vladivostok, Khabarovsk, as well as several other cities across Russia. On Monday, the press service of the Russian Interior Ministry told Sputnik that the majority of the detained participants of the rally had already been released.

"All of these calls are taking place amid the police violence, say, in Paris against protesters in relation to the killing of a citizen, a French national of Chinese descent, at his own home. So we believe these questions and calls to Russia are clearly politicized calls with an aim to put some pressure on the intra-political life in the country," Putin said at an Аrctic forum.

Russia is consistently fighting against corruption and views it as a serious problem, he continued.

"Concerning our internal political events, we are consistently calling for fighting against corruption, which is a rather serious problem for us – actually, less serious now, according to public opinion polls – and for other countries. That is urgent and we are doing that. I personally support the idea that public opinion should be focused on fighting against corruption. And I always positively appreciate public attention to these problems," Putin said.