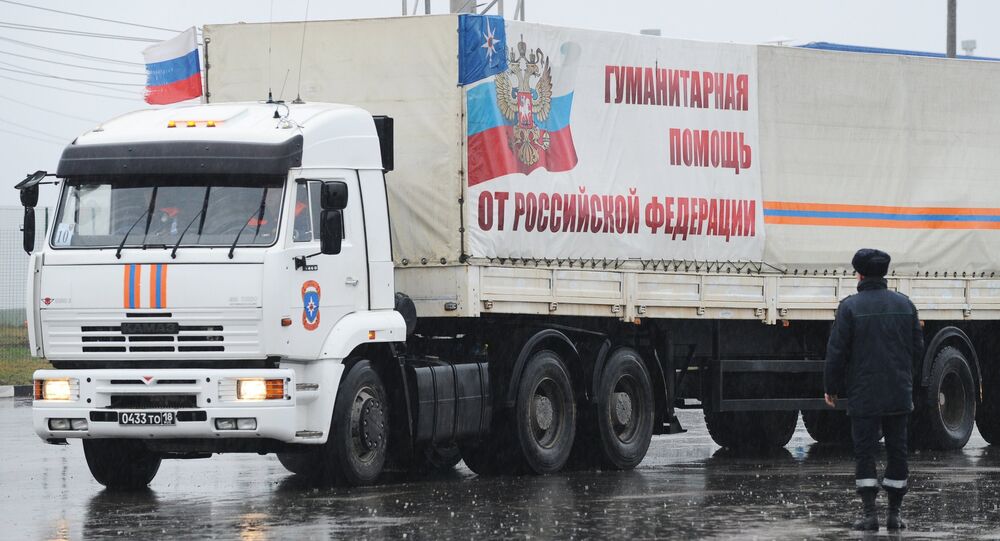 Russia sent out its 62nd humanitarian aid convoy to southeastern Ukraine (Donbas) on Thursday with a total cargo load of over 500 tonnes (metric tons), the Russian Emergencies Ministry informs.

MOSCOW (Sputnik) – The humanitarian aid has a total weight of over 500 tonnes and includes special food packs for children. The convoy vehicles will be inspected in the presence of Ukrainian border and tax officials before going to the Donetsk and Luhansk regions of Ukraine.

"It [convoy] left the Donskoy rescue center of the Emergencies Ministry in the Rostov region at 04:00 Moscow time [01:00 GMT]. Currently, over 40 vehicles are headed for the Russian-Ukrainian border," a ministry spokesperson said in the early hours of Thursday.

© Sputnik / John Trast
Poroshenko Calls for Adoption of Law Ensuring Regaining Control Over Donbass
The previous Russian humanitarian aid convoy to Donbass was sent out in February. The Russian Emergencies Ministry plans to send one more convoy to southeastern Ukraine this month.

Since August 2014, Russia has sent over 67,000 tonnes of humanitarian aid to Ukraine’s southeastern Donetsk and Luhansk regions that have been hard-hit by the special military operation that Kiev launched in the area in response to local residents’ refusal to recognize the new coup-installed authorities.

Ukraine launched a military operation in Donbas in April 2014, after local residents refused to recognize the new government in Kiev that they viewed as illegitimate. Despite the Minsk peace accords signed in February 2015, the sides continue to blame each other for ceasefire violations.

Moscow Not Opposing Against US Involvement in Talks on Ukraine