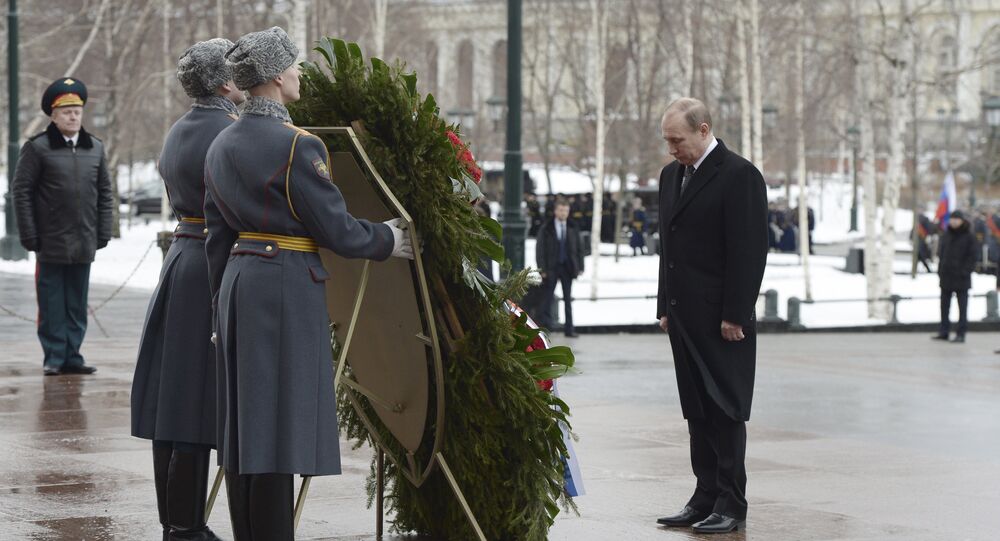 Russia, as well as Belarus and Kyrgyzstan, celebrate the Defender of the Fatherland Day on Thursday, a holiday marking the day in 1918 when the Red Army began its first draft.

© Sputnik / Igor Zarembo
Defender of the Fatherland Day in Russia: Heroism, Valor and Glory
17
MOSCOW (Sputnik) — The holiday is primarily a day to honor war veterans and those who serve in the military, but over the years "the defender" has come to stand for more than a soldier and the holiday is now also widely considered to be a Men's Day. Usually, women give small presents to their male relatives, friends, husbands and co-workers.

In Russia, the Defender of the Fatherland Day is a government holiday, with fireworks and concerts organized across the country.

This year, Russian President Vladimir Putin will lay the wreath at the Tomb of the Unknown Soldier, meet the crew of Russia's naval group led by the aircraft carrier Admiral Kuznetsov, which had been on a mission in Syria, and attend a number of other events.

© REUTERS / Sergei Karpukhin
Defender of the Fatherland Day: What Do Russians Celebrate and How
On January 28, 1918, the Council of People's Commissars (Sovnarkom), established shortly after the October Revolution in 1917, adopted a decree on the establishment of the Red Army. On February 22, Sovnarkom issued a decree declaring that the country was in danger. On February 23, mass rallies took place in Moscow, St. Petersburg (called Petrograd at the time) and other cities across Russia, while volunteers flocked to the Red Army.

In 1919, the establishment of the Red Army was suggested to be celebrated on the first Sunday before or after January 28, but since the proposal to mark this anniversary was sent in too late, the celebration was postponed until February 23.

In 1922, a military parade was held on the Red Square in Moscow, laying the foundation for future mass celebratory events on this day.