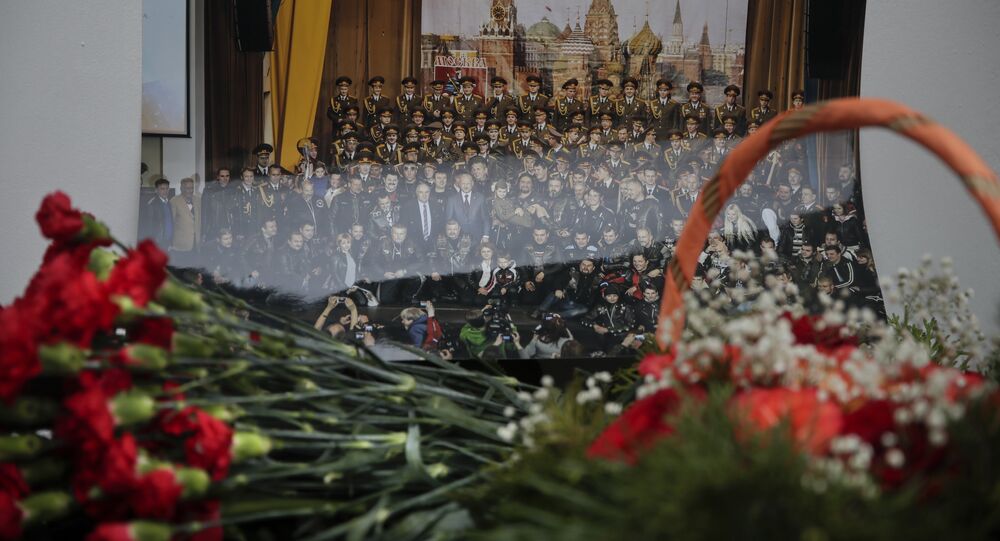 Musicians all over the world are mourning 64 members of Russia's Alexandrov Ensemble, who died in the plane crash in the Black Sea.

© Sputnik / Vladimir Vyatkin
'It Takes Years to Create Such Ensemble': Artiste Shares Memories About Vocalist Feared Dead in Tu-154 Crash
MOSCOW (Sputnik) — Artists around the world are mourning 64 musicians of the Alexandrov Ensemble, who died as a result of the Tu-154 plane crash on Sunday near the Russian resort city of Sochi.

The Academic Ensemble of Song and Dance of the Russian Army named after A.V. Aleksandrov, Russia’s biggest military and folk music ensemble, was two times awarded with the Order of the Red Banner, the first Soviet military decoration. The choir was founded by Gen. Maj. Aleksandr Aleksandrov, a prominent Soviet artist and composer. From 1946 to 1987, the ensemble was headed by his son, Gen. Maj. Boris Aleksandrov.

By 2016, the ensemble, headed by Valery Halilov, consisted of over 200 people, including 150 professional artists: soloists, men’s choir, orchestra and dancers.

The ensemble touched the hearts of millions of people around the globe. Even in the Cold War era, when the Red Army was not the best-selling brand, the musicians managed to melt the hearts of its listeners. This is how James Milne, the head of the Canadian branch of the International Military Music Society, remembered his first viewing the ensemble.

"My first memories of seeing and hearing the ensemble… was, I believe, sometime in the 1960s when they were performing their first North American Tour. The Ensemble had become known to North American audiences through recordings. When the tour brought them to Canada's capital city of Ottawa demand for tickets was such that they had to appear in a hockey arena as no concert auditorium would have been large enough to hold those who wanted to hear the Ensemble," Milne told Sputnik.

Youtube / Sputnik
People Honor Victims of Tu-154 Plane Crash
He recalled that the show was a great success with the folk song Kalinka performed encore. The ensemble has been a highly anticipated act in Canada and the United States ever since.

Numerous Serbian musicians are among those extending their condolences regarding the tragedy, with singers and conductors among them.

Dejan Savic, the conductor and acting head of Belgrade National Theater said that he was left speechless by the tragedy as it is "a loss which cannot be compensated."

"The Alexandrov Ensemble, along with the Igor Moiseyev Ballet and the Pyatnitsky Choir are the best known brands of Russian art, which have been always loved and appreciated here. This is a tragedy for the whole of Russia and the world…. We know that the ensemble will continue to work… but it is a great tragedy that these people, with their experience, talent and love for the cause, are no longer among us," Savic said.

Oliver Njego, opera singer, who performed on the same scene with the ensemble, touched on the personal aspects of her interactions with the deceased.

"I am unimaginably sad. We met at various festivals, and I can say they were wonderful guys… I will never forget our communication and the way we sang together. I have never missed their concerts in Belgrade. I cannot believe that it happened. Let them rest in peace," Njego said.

“It is an awful tragedy. I’m very sorry. I knew many [artists from the Alexandrov Ensemble] in person. They all were friendly, always in good mood. They were real professionals,” she said.

Yuri Stupak, a member of Official Academic Ensemble from National Guard of Russia under the direction of Gen. Victor Eliseev, also had friends among the deceased members of the ensemble.

"Among my friends who died today [Sunday] was a wonderful baritone soloist Grigory Osipov. I met him in 2000 during a trip to China for the World Festival of the Arts. He was a brilliant professional, talented man and a great friend… It is a big loss not just for the ensemble but for the entire Russia singing tradition," Stupak said.

Stupak added that he also used to know Pavel Zhuravlev and described him as "a beautiful singer, the winner of many competitions, and a man infinitely devoted profession."

© Sputnik / Mikhail Voskresenskiy
MSF Offers Condolences Over Tragic Death of Russian Humanitarian Activist Dr. Liza
Ljudmila Gros Popovic, the professor of music at Belgrade University said that the ensemble set the standard for her and her students.

"The ensemble used to be the example for me during my student years and for my students… This is a huge shock, pain and terrible loss for the entire world," Popovic said.

Russian Ambassador to Serbia Alexander Chepurin said that Serbian Prime Minister Alexander Vucic came to the Russian embassy early on Sunday to personally express his condolences regarding the terrible crash.

"The ensemble has performed in Serbia many times and has been always welcomed friendly. Artists of the ensemble always told me that love to come here and that they feel at home in Belgrade," the ambassador said.

He added that the Serbian prime minister offered to held a concert in Belgrade to commemorate the deceased artists while the ministry of culture suggested to name a park in the capital in honor of the ensemble members.