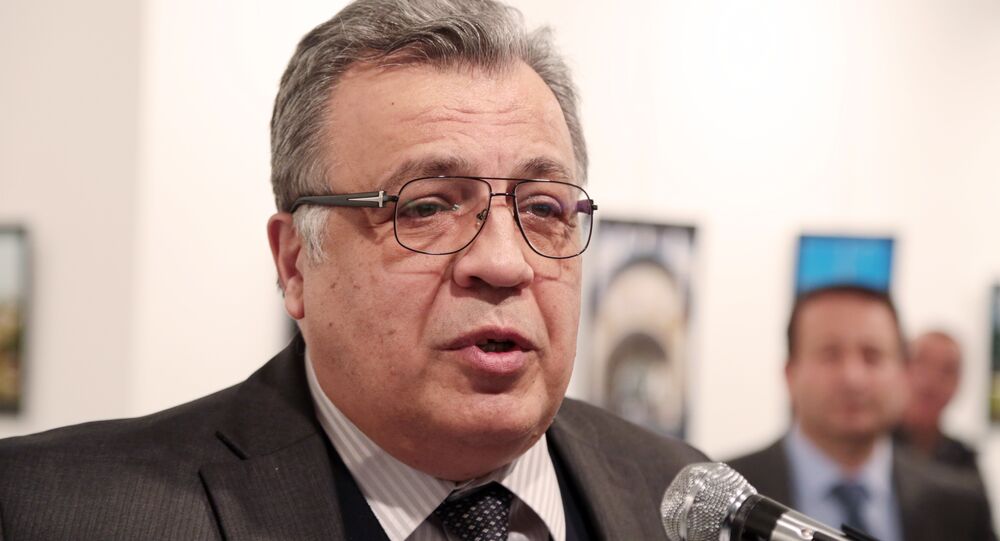 The farewell ceremony for the murdered Russian ambassador to Turkey, Andrey Karlov, is expected to take place on Thursday in the Russian capital.

Anadolu Agency
NY Daily News Columnist Refuses to Apologize for Mocking Death of Andrey Karlov
MOSCOW (Sputnik) — The funeral service will take place in Moscow's Cathedral of Christ the Savior and will be performed by the Russian Orthodox Church leader, Patriarch Kirill. The farewell ceremony will be held in the Russian Foreign Ministry and will be attended by Russian President Vladimir Putin.

On Monday, Karlov was killed by Turkish off-duty police officer Mevlut Mert Altintas at an art gallery exhibition opening in Ankara. Three more people were also injured in the attack. The Russian Foreign Ministry said it considered the attack a terrorist act.

The memory of the ambassador, who has been called by Putin as an "outstanding diplomat," has already been honored by a number of Russian and Turkish institutions.

© Photo : Russian Embassy in Turkey
Outstanding Diplomat Karlov Tried to Save Russian-Turkish Relations – Kremlin
Turkish authorities made a decision to name the exhibition hall, where the diplomat had been killed, as well as the street, where the Russian embassy was located, in honor of the diplomat.

The Russian Foreign Ministry supported the idea voiced by the Federal Communications Agency to commemorate Karlov's memory through creation of a postage stamp.

TO PUNISH GUILTY ONES

On Tuesday, Russia sent a group of 18 representatives of the Foreign Ministry, Investigative Committee and security services to Turkey.

The investigators from both Russia and Turkey are involved in an inquiry to clear the details of the incident in order to establish the potential ties of Altintas with other people, including with supporters of Islamic cleric Fethullah Gulen who is accused of having orchestrated a coup that was suppressed by the Turkish authorities in July.

Both Moscow and Ankara expressed readiness to solve the case and to punish the guilty ones.

A number of officials from both Turkey and Russia said that the purpose of the murder was to prevent the thaw between the two countries.

"This is beneficial for those who want to drive a wedge between Russia and Turkey, who want to prevent the normalization of Russia-Turkey relations, both bilateral and relations that allow to strengthen and unite the efforts for the Syrian political settlement," Kremlin spokesman Dmitry Peskov told reporters.

© REUTERS / Umit Bektas
Russian Ambassador Karlov's Murder 'Was Devastating' for Putin
His words were echoed by Turkish Foreign Minister Mevlut Cavusoglu, who added that despite the efforts of the perpetrators of the murder, Moscow and Ankara would prevent masterminds of the act of violence from reaching their goal.

Russian Defense Minister Sergei Shoigu said the assassination was connected with Russia's efforts to fight international terrorism, adding that Moscow would not stop its efforts in the struggle.

Those Who Murdered Russian Ambassador Karlov 'Will Be Punished' - Turkish FM