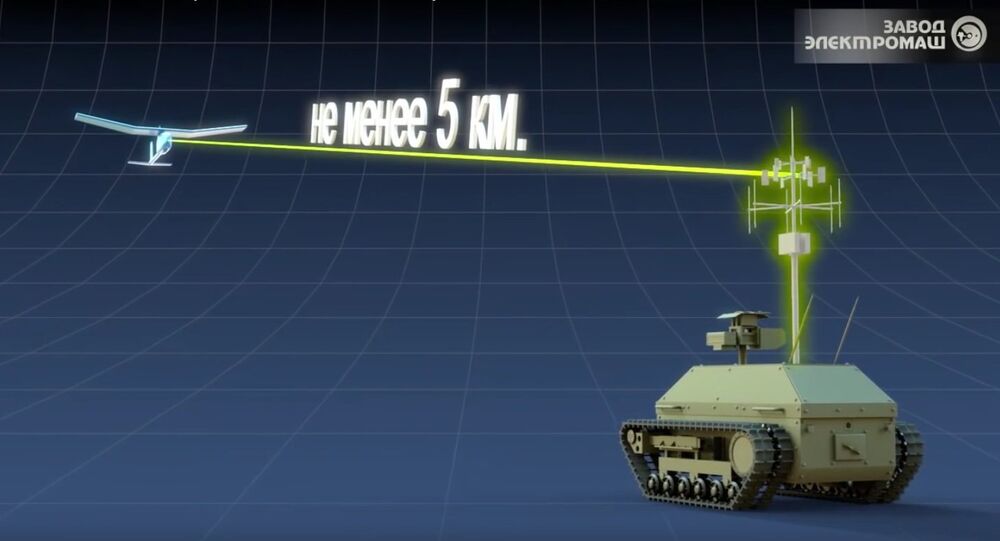 © Photo : Concern Kalashnikov
Top 5 Military Robots in the World
In an interview with Sputnik, Valery Pyatkin, spokesman for the Nizhny Novgorod-based Zavod Electromash plant, said that they had developed an advanced stealth robotic system capable of detecting reconnaissance and attack drones.

The mobile optical-radar, non-emitting complex is due to enter service at the Russian Armed Forces after the wrap-up of the development work which will last until mid-2017 at the earliest, according to Pyatkin.

"The 20-kg system includes the receiving antenna and software-hardware complex to process and display information. The system can be supplemented with optical electronics for reconnaissance purposes", he said.

He added that aside from tracked vehicles, the remotely operated system can be based on small truck chassis, including a SUV or a minivan. The detection range is over 20 kilometers, with a radar accuracy of about 10 meters.

"First and foremost, the absence of active radiation makes the system very stealthy, not allowing the enemy to detect and destroy it with anti-radar means; secondly, the system detects enemy attack and reconnaissance drones which observe radio silence mode; also, the system can effectively detect sophisticated enemy stealth drones of various types," he said.

© Photo : Youtube/ Тoparmy
Bombastic! Russia Unveils Kamikaze Robotic Tank
Pyatkin touted non-emitting radiolocation as a promising trend in the development of modern radar systems on the whole. Non-emitting radar systems use signals from those transmitters which are not related to systems, Pyatkin explained, citing TV and radio broadcasting systems, mobile connection as well as broadcasting, navigation and communications satellites.

Non-emitting radar systems detect an object by comparing and processing the signals, which include a direct signal from another transmitter and the same signal reflected from an object.