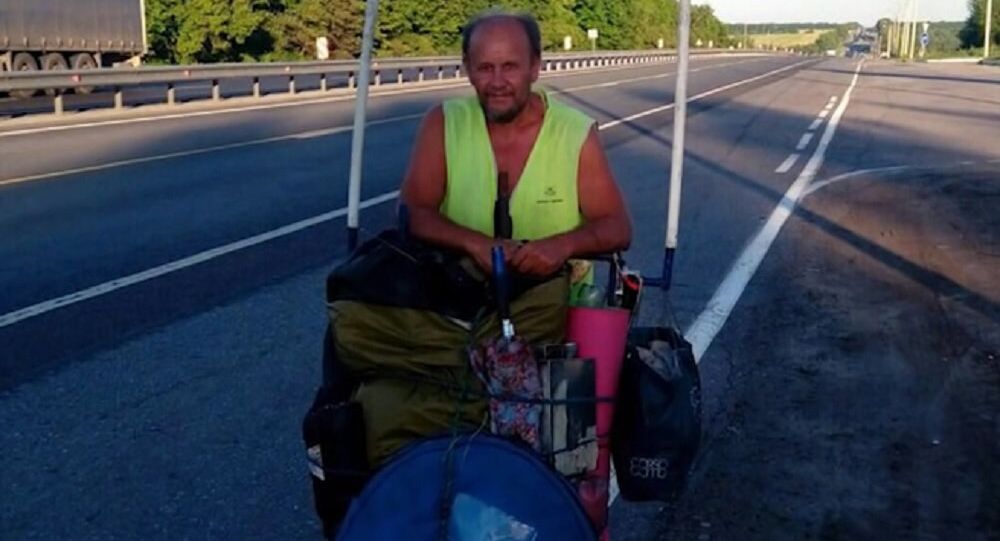 A senior citizen from Saratov, a Russian city on the Volga River, has chosen to traverse Belarus on foot to express his gratitude for the country’s show of support for Russia’s Paralympic team, which was banned from participating in the Rio Paralympic Games, Life News reports.

During the opening ceremony of the 2016 Paralympic Games in Brazil, Andrei Fomochkin, a deputy minister of the Sport and Tourism Ministry of Belarus, defiantly and unexpectedly carried a Russian flag as a political gesture. The government of Belarus condoned the move but insisted it was not pre-planned, while the International Paralympic Committee banned Fomochkin from attending the Games.

#Zakharova: Now we have our new hero. Thank you so much, Belarusian friends! pic.twitter.com/u0GxRWBSlp

© Sputnik
Young Italian Woman Cycles Over 3,000 Km to Visit Moscow
Vladimir Ponomarev, the Saratov retiree and travel afficianado, was touched by the gesture, and  decided to take a long journey across Belarus to thank Russia’s supportive neighbor. Ponomarev says the political gesture of the Belarusian official should not be forgotten.

He plans on walking from West to East across the whole of Belarus. To get to Belarus, Ponomarev took a train from Saratov to Brest, and from there started off on foot for Gomel.

He has with him a wheeled cart, in which he carries essentials such as a tent, a sleeping bag, warm clothes, food, radio and travel cooking appliances.