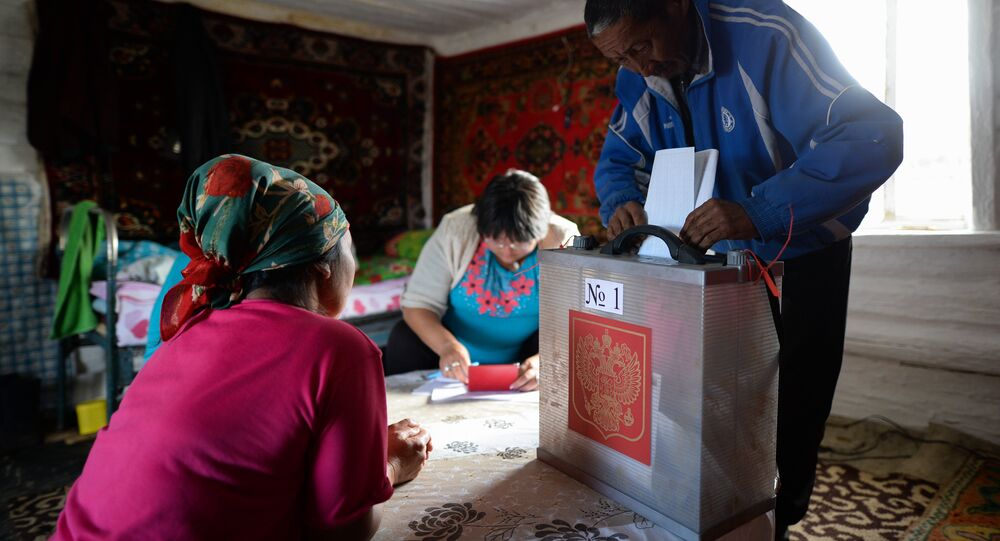 Duma Elections: The Important But Overlooked Vote Occurring in Russia This Fall

Russia's parliamentary elections, garnering little attention outside Russia amid the world's focus on the US presidential race, are entering their final stretch. On Monday, the Russian Public Opinion Research Center (VCIOM) published its final sociological analysis on the state of the race.

The parliamentary vote, taking place on Sunday, will see all 450 seats of the State Duma up for grabs. According to experts, the final week of campaigning is expected to lead to some surprises, with the battle continuing for undecided voters.

In a surprise twist, the Liberal Democratic Party of Russia (LDPR), led by Vladimir Zhirinovsky, long-known in Western countries for his provocative outbursts, has overtaken the Russian Communist Party (CPRF), which for many years had clung to second place in terms of both votes and seats in the Duma. The LDPR is polling at 12.6%, compared with the Communists' 7.4%, according to VCIOM.

© Sputnik / Vitaliy Belousov
Kiev's Stance on Russian Election 'Could Backfire on Ukraine in the Most Unexpected Way'
Finally, rounding out the 'big-four' parliamentary parties is the social-democratic Just Russia party, polling steadily at 6.3%.

Commenting on the state of the race, VCIOM general director Valery Fedorov explained that as per tradition, inter-party competition has become more acute as election day approaches, with opposition parties increasing their attacks against the ruling party to try and chip away at its share of the vote. Nevertheless, the pollster also pointed out that even though United Russia has dropped in the ratings by nearly 5%, its nearest competitor is still nearly 30 points behind.

Accounting for the small recent uptick in support for United Russia, Fedorov explained that its campaign to associate itself closely with President Putin (whose approval ratings have consistently remained above 80% since 2014) has been successful.  Incidentally, in pre-election debates, even opposition candidates have almost uniformly emphasized their support for the president's foreign and defense policy, criticizing the ruling party mainly for its domestic economic and social policy. Only ex-Prime Minister Mikhail Kasyanov's liberal People's Freedom Party (PARNAS) has come out fiercely against the president's foreign policy, and they're polling at 0.8% as of the September 10-11 poll.

© Sputnik / Sergei Guneev
Obama Compares Putin’s Approval Rating With Saddam Hussein’s Poll Numbers
As for the LDPR's success in overtaking the Communists, Fedorov suggested this had in part to do with their supporters being chipped away at by the Party of Pensioners, which has risen from 0.6% support in June to 2.4% as of the latest polling in September. Actively participating in pre-election debates on federal and regional television, the Party of Pensioners' slogans and policy proposals aimed at improving the lot of pensioners has taken voters from the Communists, according to pollsters.

At the same time, political analysts are in no hurry to bury the Communists. Higher School of Economics Professor Oleg Matveychev recently wrote that he expects the CPRF to get about 20% of the vote, with the LDPR taking third with about 15%. The professor cited social trends, including nostalgia for the Soviet Union, and the Communists' promises to improve health care, education and social security, to give them a good result. Nevertheless, the analyst also emphasized that he expects United Russia to maintain and strengthen its majority. In elections in 2011, United Russia squeaked by with 49.32%, taking 238 seats in parliament.

As for the smaller parties, which need to overcome a 5% barrier to make it into parliament, Matveychev said that only the Party of Pensioners has any sort of chance of squeaking in; other parties, including the conservative nationalist Rodina ('Motherland') and the liberal Yabloko have little chance of making it in, and are polling of 1% or less.

For his part, PolitRussia contributor Ivan Proshkin explained that apart from its association with the president, United Russia's lead can be chalked down to initiatives taken in the pre-campaign period, including primary elections in the spring – formerly a novelty for Russian politics. At the same time, the ruling party has taken to forms of direct contact with voters, including party forums and public meetings, leading to increased credibility in the eyes of voters, according to Proshkin.

© Sputnik / Vladimir Fedorenko
Fourteen Election Commissions to Observe Russian Parliamentary Vote
Proshkin chalked down the Communists' slip in support to a disappointing agitation campaign. "All kinds of billboards with all sorts of sexy girls against the background of a red flag and a hammer and sickle with the slogan 'CPRF: Strength is a Turn-on' probably amuses voters more than it makes them think about casting a vote for [Party leader] Gennady Zyuganov or his colleagues."

Finally, as far as the outsider parties attempting to make it into parliament are concerned, Proshkin concluded that for the most part, their efforts have been a failure. "These parties could not, or would not…build a successful election campaign, despite the fact that the state established all the necessary conditions for them to do so. This explains their low support shown in the VCIOM's polling."

Ultimately, the journalist noted, "the report [VCIOM] should only be taken as an approximation of the election's results. Speculating as to the vote's distribution is hardly possible, as the VCIOM itself notes that over 14% of voters have no plans to go to the polls, and a similar number remain undecided.

In any case, given the fact that half of the Duma will be elected by federal lists, and the other half by single-mandate constituencies, even smaller parties have a good chance of making it in if their candidates prove individually popular. In this sense, Proshkin emphasized, "the 2016 election can be considered among the most unpredictable" in Russia's contemporary history.

Kiev's Stance on Russian Election 'Could Backfire in Most Unexpected Way'