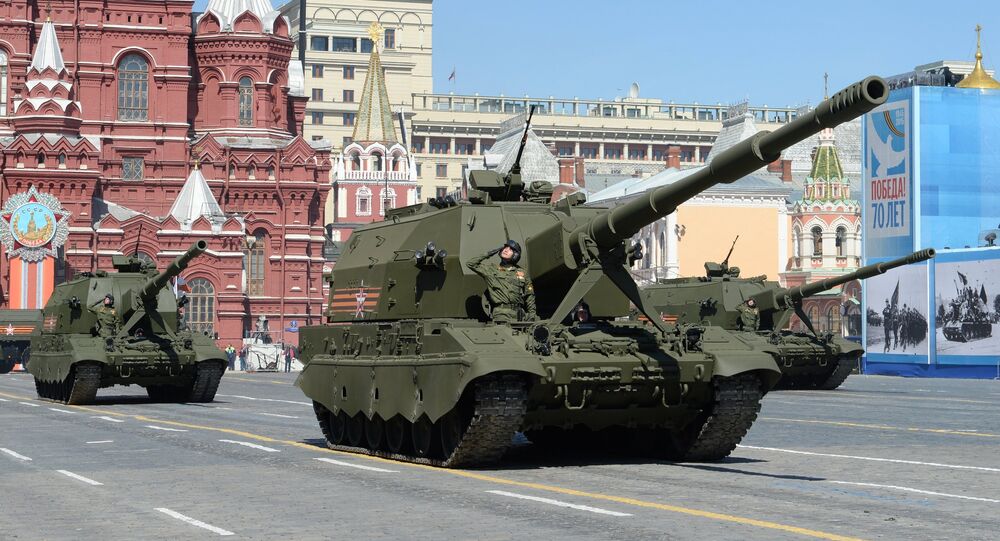 Russia to Show Off its Tanks, APCs, Howitzers in Red Square on Victory Day

Russia's whole array of state-of-the-art armored vehicles will roll through Moscow's Red Square on May 9 to mark the 71st anniversary of Nazi Germany's defeat in World War II.

© Sputnik / Maksim Blinov
Sneak Peak: The View of Moscow's Victory Day Rehearsal From Inside a Typhoon-K
The May 9 Victory Day Parade in central Moscow will feature a whole array of Russia's most advanced armored vehicles rolling through Moscow's Red Square in a military parade; these include the T-14 Armata tank, the Koalitsiya-SV self-propelled Howitzer, the Bumerang armored personnel carrier and the Tigr-M armored vehicle.

The Armata tank, "a source of major concern for Western armies" as the National Interest magazine said, features sophisticated weaponry, a remote control turret and outer armor that explodes on impact to prevent shells from reaching the crew inside.

The tank's interior features a capsule that keeps the crew isolated from ammunition and fuel, which can increase the chances for the crew's survival if the tank is hit.

A digital control system directs the tank's movement, tracks targets and activates its defense systems, freeing the crew from routine tasks so they can focus on key combat functions. Currently, the tank sports the standard 125-mm cannon, but, designers say, it could easily be outfitted with a much more powerful 152-mm cannon in the future.

As for the Koalitsiya-SV, a single self-propelled howitzer of its fortitude is worth an entire artillery battery, according to Major-General Alexander Dragovalovsky, deputy commander of Russia's Missile Troops and Artillery.

© AP Photo / Alexander Zemlianichenko, pool)
Bumerang armored personnel carrier drives during the Victory Parade marking the 70th anniversary of the defeat of the Nazis in World War II, in Red Square in Moscow, Russia, Saturday, May 9, 2015

The Bumerang is an amphibious wheeled armored personnel carrier, due to enter service with the Russian Army in 2017. It moves at a speed of 100 kilometers per hour and its armament includes a remote weapon station fitted with a 7.62 mm or 12.7 mm machine gun or a 30 mm cannon. Protection comes from ceramic armor and technologies to prevent shell splinters.

© Sputnik / Vladimir Astapkovich
Armored vehicles "Tigr" of the mechanized columns of the Central Military District's Moscow Garrison during the rehearsal of the military parade to mark the 71st Anniversary of the Victory in the Great Patriotic War, at the Alabino training ground, Moscow Region

The Bumerang is referred to as "a combat wheeled vehicle" because its other vehicle platform variations will fulfill different roles in addition to armored transport, including as an armored ambulance, command post vehicle, reconnaissance vehicle, anti-tank missile carrier, air defense missile launcher, fire support vehicle, and mortar carrier. Further versions could even include a light tank and a self-propelled gun.

© Photo : Wikipedia/Vitaly Kuzmin
The Tiger-M armored vehicle
© Flickr / Pavel Vanka
Russia's Latest Warplane to Debut Over Red Square at Victory Day Parade
And last but not least is the Tigr (Tiger)-M, a high-mobility multipurpose military vehicle manufactured by MIC, a GAZ Group division, at the Arzamas machine-manufacturing plant. It has a maximum speed of 150 kilometers per hour and can carry up to nine personnel or 1.2 tons of cargo.

The Tigr-M vehicles are mainly designed for reconnaissance and patrol purposes, as well as for protecting convoys and supporting army units. The vehicle is equipped with automatically regulated tire pressure, an automatic fire suppression system, a starting preheater and a self-recovery winch.