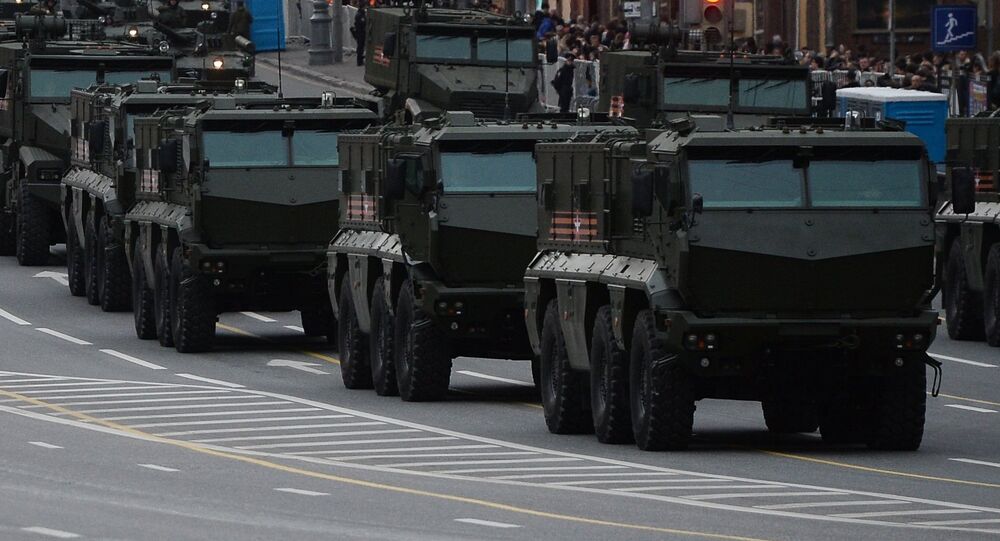 An RT correspondent spent six hours inside the cabin of a Typhoon-K, a sophisticated Russian armored vehicle; there she was able to view the rehearsal for the Victory Day Parade in Moscow.

© Flickr / Pavel Vanka
Russia's Latest Warplane to Debut Over Red Square at Victory Day Parade
RT correspondent Olga Rafayeva hopped at the opportunity to observe the rehearsal for the Victory Day Parade in Russia's capital from the cabin of a Typhoon-K, a sophisticated MRAP (Mine-Resistant Ambush Protected vehicle).

She recalled that this is the third time the Typhoon-K will take part in the Victory Day Parade, in which vehicles will proceed to Moscow's Red Square on May 9 in honor of the 71st anniversary of the defeat of Nazi Germany in the Second World War.

© RT
Russian military hardware ahead of the rehearsal of the May 9, 2016 Victory Day Parade

Eight Typhoon-K vehicles are expected to participate in the parade, Rafayeva said, while relaying a wide number of details that she said would be impossible to provide as an ordinary bystander rather than someone inside the Typhoon-K cabin.

It turns out, for example, that the Typhoon-K moved close to self-propelled guns during the rehearsal, Rafayeva said, while also pointing to military police cars. Their moves, she said, mirrored the traditions of Moscow bikers, as they managed to wedge in between the rows of moving military vehicles at a breakneck speed.

The throng of spectators also caught her eye; they were visible almost everywhere, including the sidewalks and roofs of two- or three-story apartment buildings. Many people were seen waving their hands, Fafayeva said, adding that the soldiers only waved in response when traversing easy-to-ride sections of the route.

"Only when in the cabin you start to realize that the rehearsal hours consist of permanent pauses. Military hardware often freezes for a few hours, and it is not always possible to leave the cabin. You sit in one place, not relaxed, and you are always on alert and are always ready to use a walkie-talkie," she said.

While the first rule of the parade is learning to wait, the second rule is to maintain your distance, Rafayeva explained, quoting the soldiers as saying that it takes at least two days to drill the process.

© AP Photo / Alexander Zemlianichenko, pool)
‘Unkillable’: Russia Testing New Generation Armored Vehicle
She certainly had some fun at the end of the rehearsal, when the soldiers jokingly asked how she felt riding in a vehicle which is worth 47 million rubles and which is much better than Maybach  or Bentley luxury cars.

"I've never rode in a Maybach or a Bentley, but I enjoyed being inside the Taifun-K," she said.

Based on a KAMAZ chassis, the Typhoon-K is equipped with folding cabin displays which report on the state of the vehicle, and an external review. Also, it is worth noting that the Typhoon-K's armor can withstand being hit with 30mm rounds.