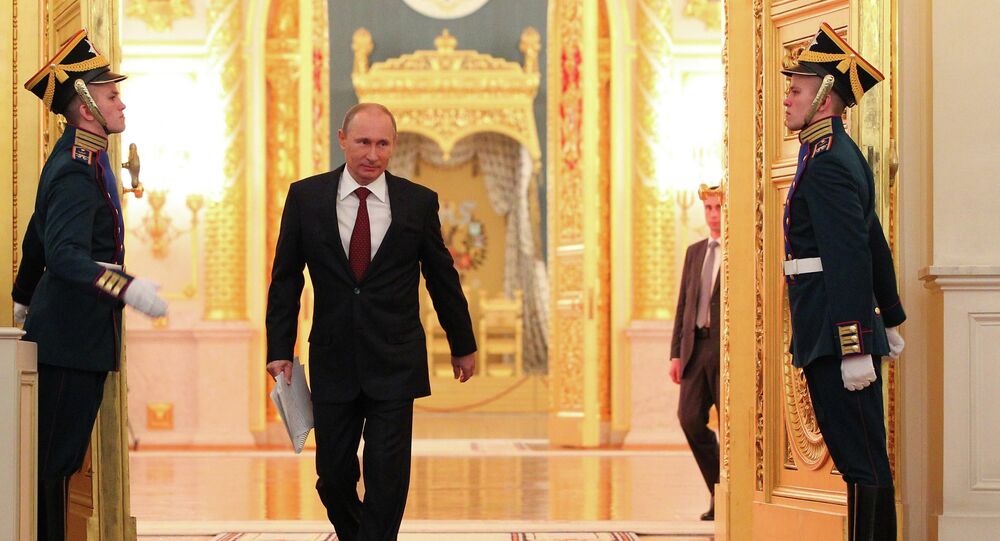 Every year Vladimir Putin gives his State of the Nation Address to Russian MPs and dignitaries, where he shapes up Russia's strategy for future development and sums up the results of the year. This year it is set for December 3; meanwhile let’s have a look at the most memorable things he said during last year's address.

In 2014, the Russian president touched upon Russia’s position in the world and the international attitude towards the country and its army, crediting Russia's strength for making the USSR the country that Hitler failed to defeat, and stressing that attempts at the disintegration and dismemberment of Russia “won’t work”.

"Just as it did not work for Hitler with his people-hating ideas, who set out to destroy Russia and push us back beyond the Urals. Everyone should remember how it ended.”

Russia’s army was a hot topic following the conflict in Ukraine, and the president stressed that he did not want the country to be drawn into a wider conflict. However, he admitted that, if forced, the Russian bear is prepared to bare its claws with devastating consequences for those who oppose it.

“The Russian army is polite, but menacing. Impossible to defeat.”

He also mentioned Crimea, as 2014 was the year when the Peninsula reunited with Russia. He compared Crimea's significance to the nation to that of the Temple Mount in the eyes of Muslims and Jews.

For centuries Crimea was part of Russia (from 1783 towards 1954). The peninsula is ethnically Russian, not just Russian-speaking. However, in 1954 it was given as a gift to Ukraine by Nikita Khrushchev, then-head of the Soviet Union, who believed national boundaries were irrelevant given that they all came under the banner of the Soviet Union.  In 2014 the Peninsular reunited with Russia.

“Crimea is as sacred to Russia as the Temple Mount is to Islam and Judaism.”

Last year also saw the introduction of anti-Russian sanctions in the aftermath of the Ukrainian crisis, as the EU, US and other Western countries sought to cripple the country’s economy. However, the sanctions and Moscow's counter-measures did the opposite by boosting import substitution and prompting the country to look for new partners in the East.

“Sanctions, of course, are damaging, but damaging to everyone, including those who initiate them.”

Referring to the sanctions and the reason for their imposition – the conflict in Ukraine, and Russia's reunification with Crimea, he also said:

“I’m sure that if these events had never happened – I want to point this out specifically for you as politicians sitting in this auditorium – if none of that had ever happened, they would have come up with some other excuse to try to contain Russia’s growing capabilities, affect our country in some way, or even take advantage of it.”

Also in the wake of the imposed sanctions, Vladimir Putin assured that Russia won’t be backed into a corner and nevertheless wants good relations with all countries, including the ones that are set on hindering its economic growth, ruling out any self-isolation.

“Being isolationist or xenophobic is weak. We are strong and believe in ourselves.”

In the wake of deteriorating relations between Russia and Ukraine as well as tension in Moscow's relationship with the Baltic States, the president mentioned the role of the US, which he claimed is “always influencing Russia’s relations with its neighbors, either openly or behind the scenes.”

“Sometimes it is even unclear whom to talk to: to the governments of certain countries or directly with their American patrons and sponsors.”

He also addressed the sovereignty of Russia:

“If for some European countries, national pride is a long-forgotten concept and sovereignty is too much of a luxury, true sovereignty for Russia is absolutely necessary for survival.”

“I would like to emphasize this: either we remain a sovereign nation, or we dissolve without a trace and lose our identity.”

He wrapped up last year's speech by saying:

“I will conclude my address where I began it. This year, as has been the case many times during crucial historical moments, our people have demonstrated national enthusiasm, vital endurance and patriotism. The difficulties we are facing today also create new opportunities for us. We are ready to take on any challenge and win.”