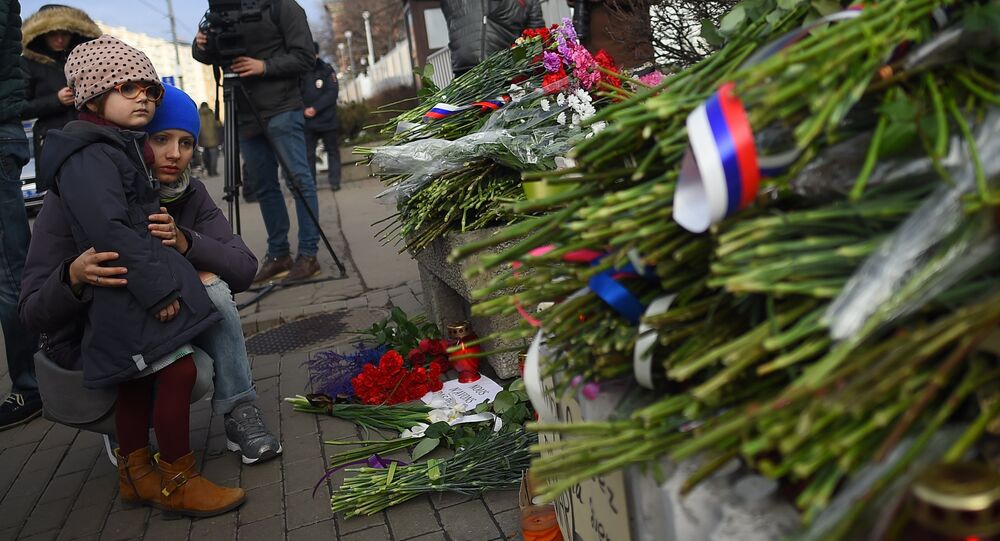 'We Mourn With You, We Pray for You' – Russians React to Paris Attacks

The deadly terror attacks which struck Paris on Friday night have left Russians shocked, outraged, and mourning for victims and their families. From officials, to journalists, to celebrities and ordinary citizens, Russians are calling for solidarity with the French people, and for swift justice against the perpetrators of the attacks.

© Sputnik / Vitaly Belousov
Russian Leaders Send Messages of Grief and Solidarity After Paris Attacks
As expected, Russian President Vladimir Putin was swift in offering his condolences, the president noting that "this tragedy is but another testament to the barbaric nature of terrorism, which has issued a challenge to civilization."

Other officials were also quick to voice their outrage over the barbarity of the attacks, Duma Chairman Sergei Naryshkin saying that Russia is "shocked by the scale of the tragedy, and mourns together with the France over the innocent victims who died at the hands of these demented killers."

Russian officials' condolences were matched by ordinary Russians. Overnight, the French Embassy in Moscow quickly became a vigil for solidarity with Paris, Muscovites bringing flowers and candles and signs reading 'France, I weep for you' and 'Russia mourns with France'.

On his Facebook page, journalist Alexei Sinelnikov lamented that "for us the French are not strangers. And when Paris writhes in pain, we feel it as our own…Be strong Paris. I do not know whether you will be able to find the strength. This is a wound which will last for many, many years. It's all just awful, and brings one to tears."

Russian-Ukrainian writer and analyst Platon Besedin sent his own condolences: "Paris: we mourn with you. We pray for you, our French brothers. I myself have never been to France, but grew up on French literature. Your culture, your country is dear to us, making what happened all the more painful to watch. The whole world is with you, France, and I think that Russia and Ukraine understand you best of all. My deepest condolences."

© AP Photo / Thibault Camus
Horror and Terror: Videos Show Dramatic Moments of Deadly Paris Attacks
Svobodnaya Pressa contributing editor Zakhar Prilepin recalled that "perhaps nowhere in the world do people show such warmth toward Russia as in France." The journalist noted that today, perhaps "nowhere else in the world are huge halls so packed to see Russian writers, historians and musicians as in France. It was in France that I last saw [murdered Ukrainian journalist] Oles Buzina. Where else would we be invited, if not Paris…I love the charming, intelligent, witty, kind French people…France is one of the wonders of the world –a country of the impossible, of magic. I feel as if what happened is my personal pain. This event will only bring us closer together. We understand one another, as few peoples in the world do."

Ordinary Russians, expressing themselves on social media, were equally vigorous in their support for their French counterparts, with the hashtag #JeSuisParis and its Russian-language derivatives becoming popular on Russian social media.

"The terror attacks in Paris are a challenge to the civilized world. Je suis Paris."

"Hands off my Paris!"

"What are you animals doing? Hang on, #Paris."

"Paris, we are with you. It's just a terrible tragedy. Let all these monsters be caught and shot down for their actions."

"Terror in Paris, over 150 persons dead. The scale of the barbarism and cruelty is beyond imagination. Condolences to all French people; we grieve with you."

"How painful. How painful it is to live in a world where terror attacks exist. Paris, I am with you with my heart and in spirit!"

Many Russians, recently offended by French satirical weekly Charlie Hebdo's jokes over the A321 passenger plane crash in Egypt, voiced their hopes that the publication would show respect for the victims and keep quiet about Friday's attacks. Russian businessman Alexander Lebedev tweeted:

"I hope that Charlie Hebdo will make do without its traditional jokes."

"Europe and Russia must unite against our common enemy. We must forget all our grievances…"

"Such attacks on the contrary only work to rally people. What did those who commited this crime hope to achieve? Paris, France, we are with you."

Muscovites Lay Flowers at French Embassy in Solidarity With Paris