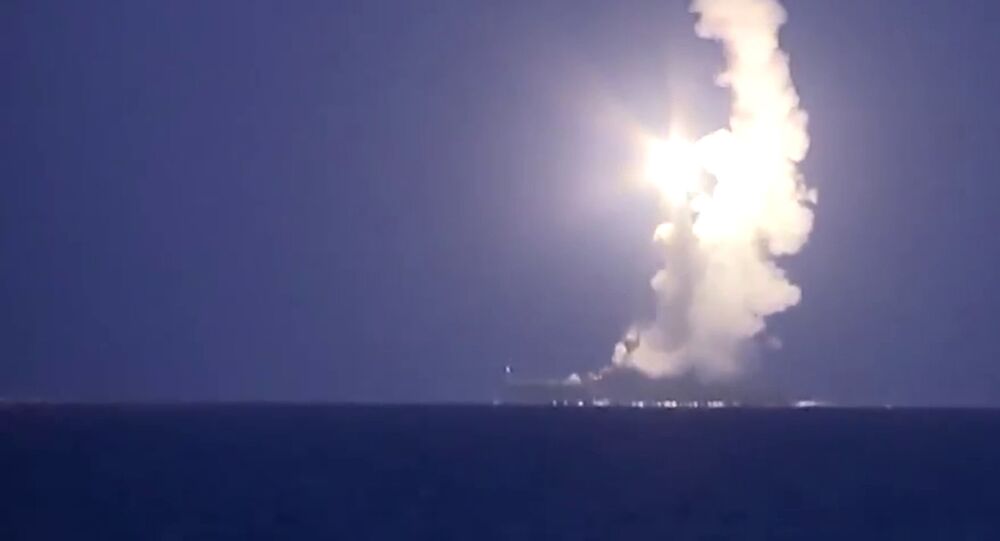 Russia's cruise missile strikes against ISIL targets in Syria were launched from an unlikely place: the Caspian Sea, where Russia operates a small but highly advanced naval force.

© Photo : Youtube / Russian Defense Ministry
Russia Releases Video of Cruise Missile Strikes on ISIL Targets in Syria
The Russian cruise missile strikes against ISIL on Wednesday were carried out by the little-known Caspian Flotilla of the Russian Navy.

Hidden away in the inland Caspian Sea, the flotilla has long been used for the testing of experimental weapons away from the prying eyes of other navies. Although it is fairly modest in size, the flotilla is unique in that it also carries Russia's newest naval weaponry.

"Everyone is used to Tomahawk missiles used in wars from the sea by large ocean fleets. We demonstrated a completely different concept. From a basically land theater, and the Central Asian military theater is basically that, we made a naval cruise missile strike, demonstrating that our navy can carry out strategic missions from deep inside the continent," military commentator Ilya Kramnik told Defending Russia.

The Kalibr cruise missiles launched at ISIL targets in Syria were based on three missile boats and one Gepard-class frigate.

Russia's Caspian Flotilla is based in Astrakhan and has two frigates along with seven small missile and artillery ships, as well as 22 smaller boats. It has experienced significant modernization since around 2010, receiving nearly all of its new ships, including the ones where the missiles were launched.

The Kalibr missiles which were fired were developed in the late 2000s; they are exported under the name Club-S. The missiles and their launcher can be installed on ships, submarines and mobile ground platforms. A clandestine variant known as the Club-K, which fits the launching system into several shipping containers, is also available.

The Caspian Flotilla also received some experimental equipment, such as the famous ekranoplan. In addition, the flotilla has hovercraft units based in Makhachkala and Kaspiysk.

The largest of the ekranoplans was the Lun, built in the Soviet Union and retired in the 1990s, which was capable of guided missile launches and speeds of up to 500 kilometers per hour at only four meters above the surface surface of the water.

A new ekranoplan is also said to be in development, with possible plans for cruise missile launch capability.