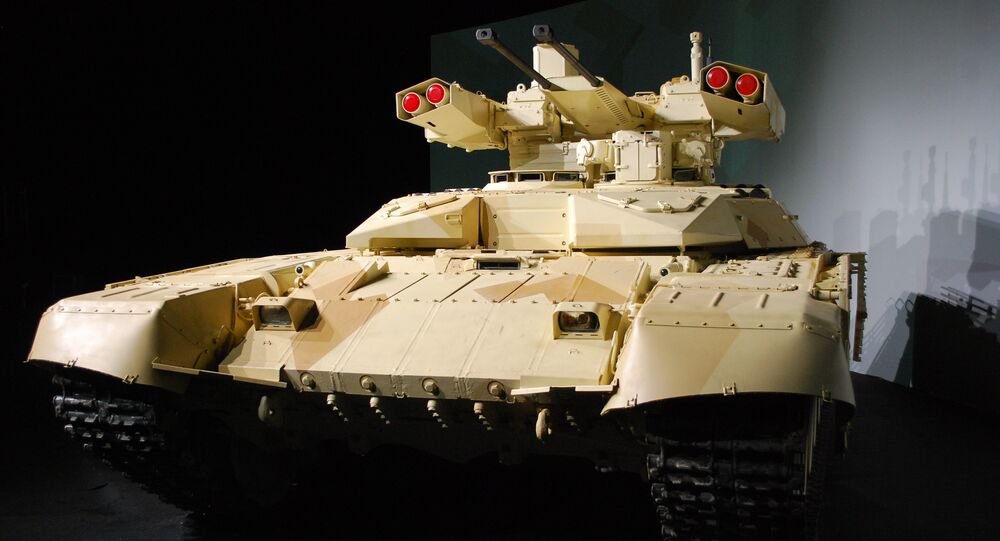 A new version of the unique Russian-made BMPT tank support combat vehicle, the BMPT-72, was the must-see vehicle at the International Military-Technical Forum Army-2015 that recently wrapped up in Kubinka, outside Moscow.

One of the main attractions of the International Military-Technical Forum Army-2015 in Kubinka became the BMPT-72, a modernized version of the unique Russian-made BMPT tank support combat vehicle. This is no surprise given that the BMPT-72, also known as the 'Terminator 2', has only been shown to the public on a few occasions, the Russian television channel Zvezda reported.

Developed by Russia's UralVagonZavod Corporation and built on the on the chassis of T-72 battle tank, the BMPT-72 multipurpose tank support combat vehicle is fitted with a state-of-the-art guided weapons system and is capable of destroying infantry vehicles, enemy tanks and other armored objects, as well as helicopters.

As such, the BMPT-72 is a unique project, especially in terms of its powerful armament, Zvezda said, citing Russian military expert Viktor Murakhovsky.

"The BMPT-72 is unique in featuring a variety of weapons, from rapid-fire guns to grenade launchers, which is why fighting enemy armored vehicles and manpower is an easy task for the Terminator-2," Murakhovsky said.

The BMPT-72 is armed with two 30-mm 2A42 automatic cannons that can load ammunition of 850 rounds, four laser-guided Ataka-T anti-tank missile systems and one coaxial machine gun with a remote reloading mechanism.

The vehicle can survive in different climates and zones, including urban areas, and in any light conditions. The Terminator 2 is equipped with night vision, a laser range finder, as well as an integrated laser controlled missile guidance system. It can detect targets within a 5km range, day or night.

© Sputnik / Mikhail Voskresenskiy
Russian Engineers to Turn Armata Tank Fully Autonomous
Compared to the BMPT, only three crew are used on the BMPT-72, with two grenade launching positions now not required due to automation. The combat weight was also reduced from 47 to 44 tons, with the length and the width standing at 7.2 meters and 3.59 meters, respectively.

According to Murakhovsky, it is quite possible to assemble this advanced vehicle without spending hefty sums from state coffers.

"It's cheap and efficient", he said when asked how much money the BMPT-72 costs to build and operate.