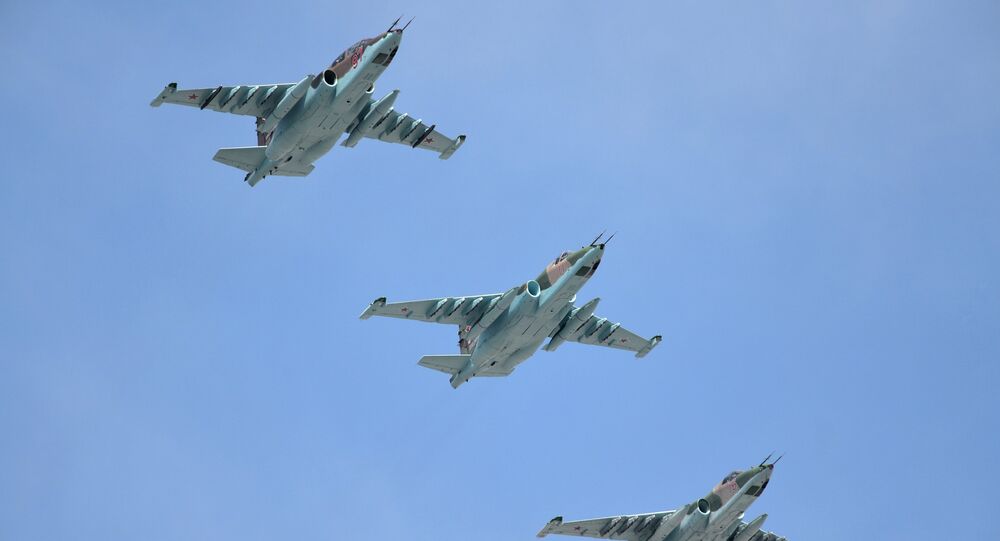 More than 1,800 training flights will reportedly be made by pilots of an aviation regiment of the Su-25SM attack aircraft stationed in Russia's Southern Military District before the end of this year.

© REUTERS / Stringer
Iraqi Defense Says Russian Su-25 Jets Supply Helps Baghdad to Battle ISIL
By the end of 2015, pilots from an aviation regiment of Su-25SM attack aircraft stationed in Russia's Southern Military District will make over 1,800 sorties using standard weapons. They will perform more than 900 practical bombings, drop more than 1,500 bombs and launch at least 2,000 unguided air-to-surface missiles, according to the Russian TV network Zvezda, which is run by the Russian Defense Ministry.

The broadcaster said that one third of firing and bombings will take place at night amid bad weather conditions. The exercises will focus on the use of standard weapons in mountainous areas and in different frequency ranges.

Stationed in Russia's Krasnodar region, the Su-25SM crews will wage war against a simulated enemy, attacking foot soldiers as well as armored vehicles, objects, and the bases of simulated enemy armed formations; the targets will also include large fuel-oil depots, as well as caches of weapons and ammunition.

© Sputnik / Alexei Nikolsky
Iraqi Pilots on Russian-Made Su-25 Jets Launch Anti-IS Airstrikes Near Tikrit: Reports
The Su-25SM is a modernized version of the Su-25 attack aircraft, a single-seat, twin-engine jet aircraft which was developed in the former USSR by the Sukhoi Design Bureau. It was designed to provide close air support to Soviet Ground Forces, and its first prototype made its maiden flight in February 1975.

The first upgraded Su-25SM, which has significantly better survivability and better combat effectiveness, was flown in March 2002.