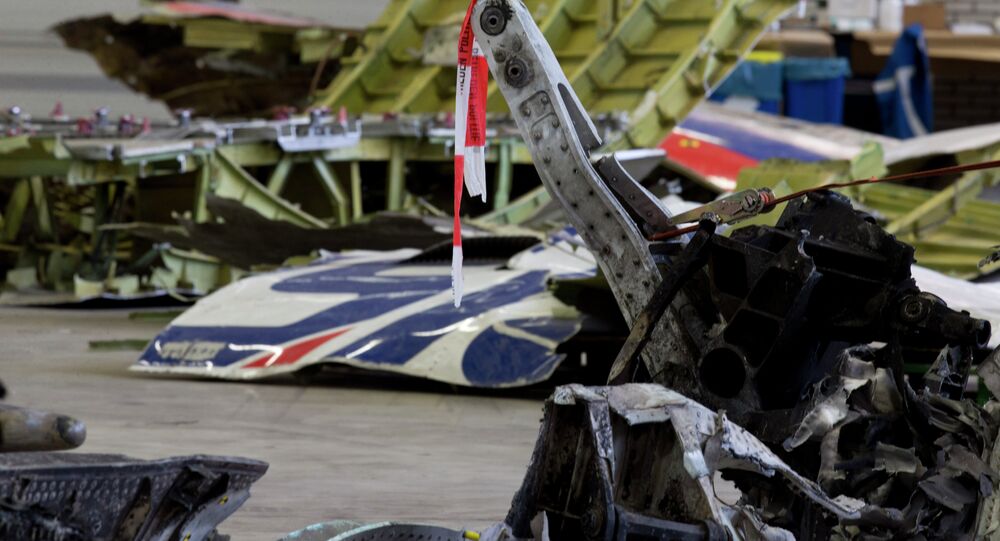 Russia's air defense systems manufacturer Almaz-Antey presented its report on the 2014 flight MH17 disaster at a press conference on Tuesday.

Malaysia Airlines flight MH17 was downed by a Buk 9М38-М1 guided missile fired from Ukrainian military-controlled territory, engineers from the Russian Almaz-Antey corporation said in a press conference presenting their report on Tuesday.

Flight MH17 crashed over Ukraine on July 17, 2014, killing 298 people. After the crash, the European Union enacted sanctions against Russian companies, including Almaz-Antey, which was blamed for manufacturing the missiles which shot down the plane. Almaz-Antey's report showed that the missile in question stopped being manufactured in Russia three years before the company was founded.

"During the first stage of our investigation, the type of system was established. It was a Buk-M1 system [NATO reporting name SA-11], a 9М38-М1 rocket and a 9М314 warhead," head engineer Mikhail Malyshev said.

The Russian military uses Buk 9M37 missiles. The missile identified in the damage report was not produced in the Russian Federation since 1999, which is before Almaz-Antey was founded in 2002.

"We have conclusive evidence that the Ukrainian armed forces have this type of missile," Almaz-Antey general director Yan Novikov told journalists.

Almaz Antey: Only 1 type of Buk missile (9M38m1) could do damage seen on MH17, out of production, used by Ukraine pic.twitter.com/JAhhUYSv6d

"The key feature of the 9M38-M1 missile is that it creates a particular 'scalpel'-shaped area perpendicular to the missile's direction," Malyshev said.

"It was exactly this scalpel impression found on the plane's skin that allowed us to find the missile's approach trajectory with a high degree of probability," Malyshev added.

"The shrapnel moved from the nose of the plane to its tale inside its fuselage. The left engine, left wing and partially the tail unit were damaged. Specialists concluded that the missile was moving with a considerable intersection of the plane's flight path. That is, not from the front but from the side," Malyshev said.

The specifications of the 9M38-M1 missile shrapnel were published for the first time having been previously classified. Almaz-Antey received permission to declassify the information from the Ministry of Defense, Almaz-Antey general director Yan Novikov said.

Zaroshenskoe, that's where Almaz Antey said the Buk missile that killed #MH17 was launched from. pic.twitter.com/grWDj4CCz7

Malyshev added that Almaz-Antey is willing to carry out a field test with independent experts to confirm the findings.

"We are willing to carry out a demolition of a 9M38M1 missile at a specified angle and aimed at the same model aircraft," Malyshev added.

Cannot explain why US has not published its satellite findings, could answer who to blame for MH17 crash: missile manufacturer Almaz-Antey

Almaz-Antey added that there were US satellites flying over the area on the day of the plane crash, and releasing the information would help the investigation.