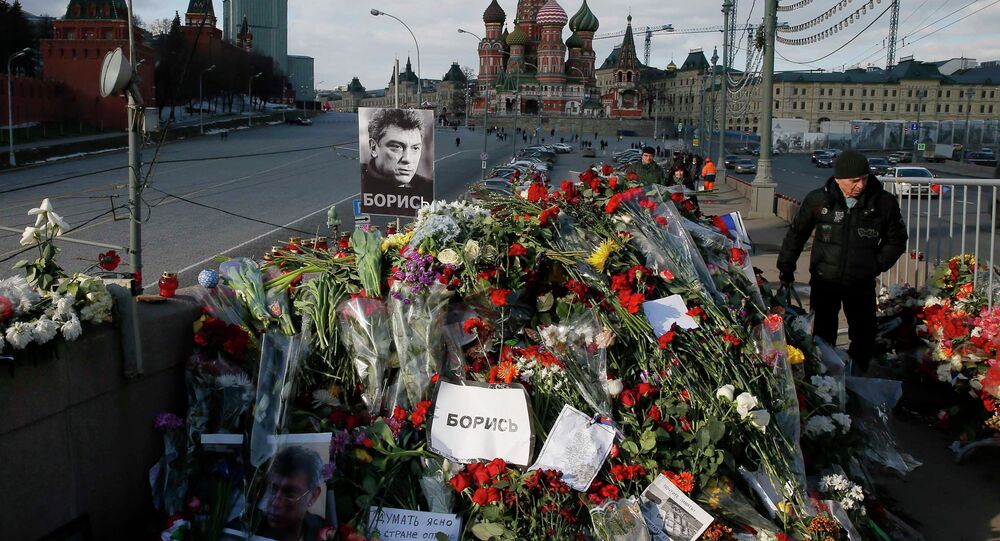 The girlfriend of Hamzat Bakhayev, one of the suspects in the murder case of Boris Nemtsov, said she had spent two days with him at his apartment in Moscow when the politician was killed.

© Sputnik / Maksim Blinov
Defense in Nemtsov Murder Case to Apply for Jury Trial
MOSCOW (Sputnik) — The defense for one of the suspects in the murder of Russian opposition politician Boris Nemtsov, Hamzat Bakhayev, has offered an alibi for his client, the Russian Kommersant newspaper reported Friday.

According to the newspaper, defense lawyers have submitted to the Russian Investigative Committee evidence that Bakhayev was not involved in the murder of the politician.

Bakhayev is suspected of providing the murderers with unspecified information, and with a hideout in a house on the outskirts of Moscow.

However, the suspect's girlfriend said she had spent two days with Bakhayev at his apartment in Moscow when Nemtsov was killed.

Bakhayev's lawyer Zaurbek Sadakhanov was quoted by the newspaper as saying that Bakhayev did not leave Moscow after February 27.

Nemtsov served as Russia's deputy prime minister in the late 1990s. In the following decade, he became one of the most prominent critics of the Kremlin. On February 27, he was fatally shot in central Moscow.

Dadayev is the only suspect to plead guilty but later withdrew his plea after the Presidential Council for Civil Society and Human Rights suggested his confession was made under duress.