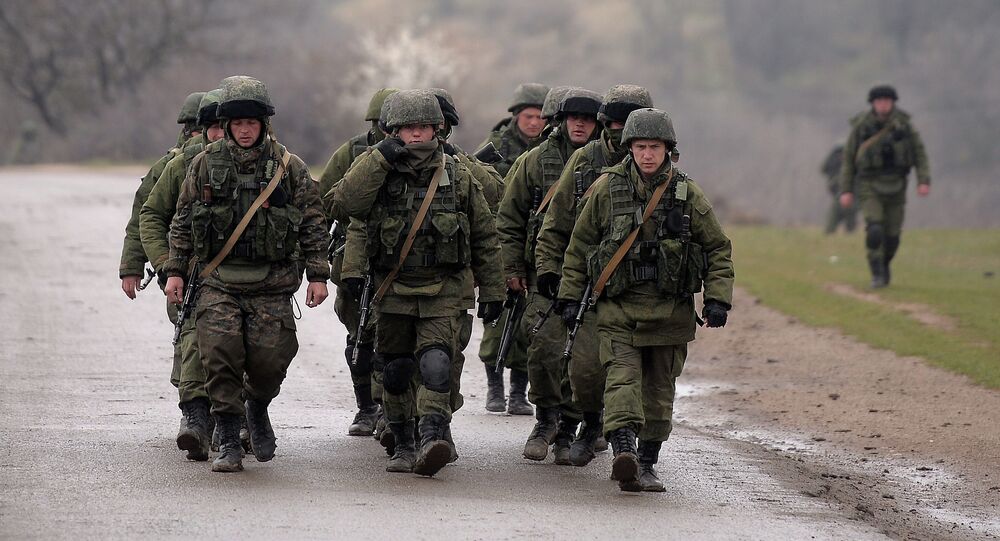 Less than a year after it unified with Russia, Crimea is home to a full-fledged military grouping and developments continue as the peninsula improves its security.

Crimea's military modernization has become one of the key events in the development of the country's military in the year since it joined Russia; seven new formations and eight military bases have been added to the Russian military presence on the peninsula, which Russian Minister of Defense Sergei Shoigu called a "full-fledged, self sufficient military grouping."

After the March 2014 Crimean referendum, Viktor Chirkov, the commander of the Russian Navy, announced that Crimea had 79 Ukrainian Navy ships, including 25 warships, which Russia was ready to hand over to Ukraine.

Since April 11, 2014, when the missile boat Priluki was handed over, Russia has transferred 43 ships and boats to Ukraine, as well as all Ukrainian military vehicles and also some of its planes and helicopters. However, in mid-June, when Ukraine's National Security and Defense Council suspended its military and technical cooperation agreement with Russia, the process was paused.

On Monday, Ukrainian President Petro Poroshenko announced that Ukraine intends to take back the rest of Ukrainian weaponry in Crimea. However, this is not very likely as the Commander of the Russian Black Sea Fleet, Admiral Aleksandr Vitko, announced in 2014 that the transfer process would not be resumed because the transferred weaponry could be used in the Donbas conflict.

In September 2014, Defense Minister Shoigu noted that the escalation of the Ukrainian situation, Crimea's reunification with Russia and a growing military presence near Russian borders created "determined corrections" to the Southern Military District's command.

In November 2014, 14 multipurpose Su-27SM and Su-30 jets arrived at the Belbek Air Base and the air defense received new S-300PMU and Pantsi-S1 systems.

Crimea's re-unification with Russia also led to new developments in the Black Sea Fleet, which Ukraine previously attempted to impede. In 2015 and 2016, the Black Sea Fleet will receive six new Admiral Grigorovich-class frigates, six Project 636 "Varshavianka" diesel submarines, as well as Buyan-M missile boats, most of which will be based in Crimea.

New anti-sabotage and defense forces have also buffed up Crimea's security. The Sevastopol Oceanarium, which trained the Ukrainian Navy's bottlenose dolphins joined the Russian Navy, and in November 2014, the Black Sea Fleet conducted exercises with the dolphins, which detected submarines at a depth of over 60 meters.

In December, the Crimean Naval Base in Sevastopol, which Russia ceded to Ukraine in 1996 was rebuilt. In addition, Sevastopol will now handle the repair of Russian ships, including those performing duty in the Mediterranean. However, this is a small part of what was once a system that included submarine bases built into cliffs, and the Black Sea Fleet is scheduled to receive over 86 billion rubles ($1.40 billion) by 2020 to rebuild the system.

© Photo : Youtube/RuptlyTV
No Way Back: Ukrainian Soldiers Allegedly Mine Two Bridges to Crimea
There are many challenges to Crimea's security today, including not only NATO's presence in the Black Sea, but also Ukraine, which has placed artillery batteries on its border with the peninsula and mined bridges that connect Crimea to Ukraine. Russia is already working to secure Crimean communication security by building a new bridge over the Kerch Strait and building new power stations to protect Crimea from Ukraine's erratic power cuts. The construction of a new power station will begin later in March and a new bridge is expected to be built within four years.
...
Reddit
Google+
Blogger
Pinterest
StumbleUpon
Telegram
WhatsApp
577

Rossiya Segodnya to Translate Movie About Crimea Into Dozens of Languages