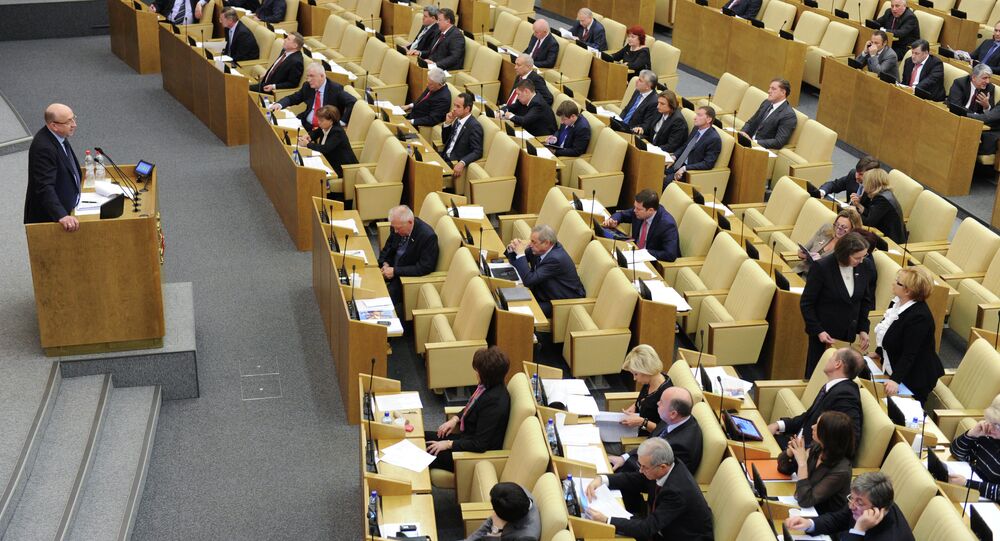 A number of new legislative acts are set to come into force in the New Year.

© Sputnik / Alexei Druzhinin
Putin Signs Law to Make GMO Labelling Administratively Accountable
MOSCOW, December 31 (Sputnik) – A number of new laws are set to come into force in Russia starting on January 1 which will hopefully improve the lives of everyday Russians.

A new reform passed in July 2014 introduces a new formula for calculating pensions, and mandates that Russians who were born after 1967 choose whether to send a portion of their pension investment to a private pension fund, or invest the full amount in the state insurance fund. The new formula calculates the pension's value using a points system, called a pension coefficient. An individual will have to earn 30 pension coefficients in order to qualify for a retirement pension.

The national minimum wage is set to rise by 7.4 percent, from 5,554 rubles a month in 2014 to 5,965 rubles a month in 2015. The change will take place on January 1, and will be accompanied by other rises in social security payments including welfare payments to the families of children with disabilities.

"None of the Above" Option When Voting

From January 1, Russian voters will once again be able to indicate their dissatisfaction with all of the candidates running for any given municipal elected office, with the addition of another tickbox at the end of their ballot: "opposed to all." The move reinstates the option, which had been present on ballots in the Russian Federation from 1991 until it was withdrawn in 2006 from all elections.

Russian schoolchildren will no longer have to carry a rucksack full of books to school, as a new law decrees that all textbooks in the school program also have to be available in an electronic version which will be available for use on tablets, desktop computers and mobile phones. The innovation featured in a pilot program carried out in Moscow schools this autumn, which included "textbooks at three speeds" and levels of detail: the first, a five minute overview of the chapter; the second, a reading of the whole chapter; and the third, which offers deeper immersion into the subject, including encyclopedia entries.

The quality of motor fuel will be subject to stricter controls, and petroleum or diesel must comply with Euro-4 or higher emission standards. Car tires area also subject to new requirements from the Eurasian Economic Commission: drivers will be required to equip their cars with tires that suit the weather. In addition, individuals who want to ride scooters and sail motorboats will have to take a practical exam as well as the current theory exam. The new rule only concerns those who are applying for new licenses- currently valid licenses will continue to be in force until their expiration dates.

According to new legislation passed in May 2014, all personal data kept about Russian citizens must be kept in servers on Russian territory. The law needs to be approved by the Federation Council before it is due to come into force on September 1, and presents challenges for services including social networks, internet stores and IT companies using cloud services based abroad.