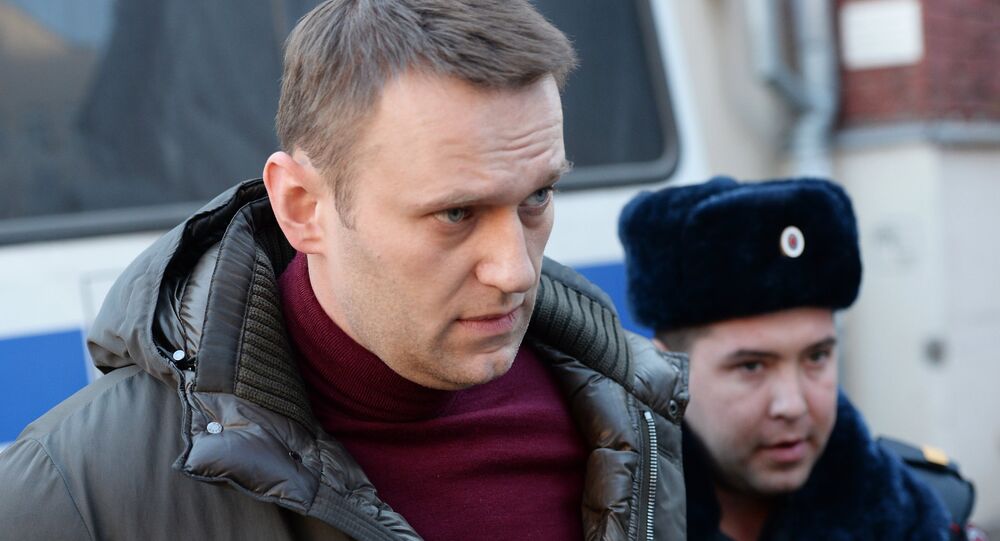 Russian opposition leader Alexei Navalny was detained on Tuesday by police in downtown Moscow when he attempted to join a protest rally after violating his house arrest.

MOSCOW, December 30 (Sputnik) — Opposition blogger Alexei Navalny has broken the terms of house arrest and came to Manezhnaya Square in the center of Moscow to join crowds of his supporters.

According to the terms of his sentence, Alexei Navalny is not allowed to leave his residence.

"Despite the house arrest I want to be together with you today. So I'm also heading there," Alexei Navalny wrote via Twitter.

Shortly after arriving at the Manezhnaya Square Alexei Navalny was arrested by police officers.

“I was not able to reach Manezhnaya [square], but that does not mean you [other protesters] won’t,” Navalny wrote in his Twitter blog.

“I urge everyone to stay. They won’t arrest all,” he tweeted.

Earlier on Tuesday the Moscow court has handed down a suspended sentence of 3.5 years on embezzlement charges. His brother Oleg was sentenced to a prison term of 3.5 years and was immediately taken into custody.

© Sputnik / Grigory Sysoev
Moscow Court Hands Opposition Figure Navalny 3.5-Year Suspended Sentence
The sentences are substantially lower than the 10 years requested by the prosecution for Alexei and eight for Oleg, who was also fined 500,000 rubles ($9,000).

The brothers were fined an additional 4.4 million rubles ($77,500) in a civil case involving the Multifunctional Processing Company (MPC).