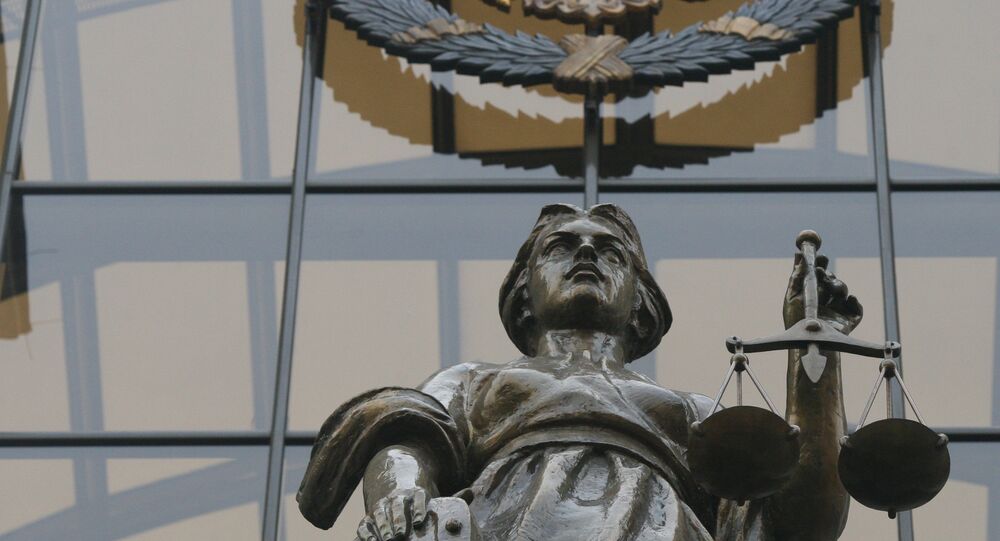 The Russian Supreme Court ruled the international organizations of the Islamic State and Jabhat al-Nusra are terrorist organizations.

Following the closed-door ruling, any activity by either group is banned in the Russian Federation.

Earlier in the day, the court's press service stated that the initial proposal came from the Prosecutor General's Office.

Jabhat Al-Nusra or Al-Nusra Front is the name of the Al-Qaeda branch in Syria and Lebanon. It has been active since 2012 and has been fighting against the government in the Syrian civil war. The group has been designated as a terrorist organization by the United Nations, Australia, Canada, New Zealand, Saudi Arabia, the United States, the United Kingdom, and Turkey.

© Sputnik / Vladimir Fedorenko
Russian Supreme Court to Consider Recognizing IS, Al-Nusra as Terrorists
The IS, a Sunni Muslim group, also known as the Islamic State of Iraq and Greater Syria (ISIS) or the Islamic State of Iraq and the Levant (ISIL) has seized large parts of Iraq and Syria and proclaimed an Islamic caliphate on the territories under its control. The group's rapid advance and notorious human rights atrocities in northern Iraq and Syria triggered a military response from the United States-led international coalition, which carried out a number of airstrikes on IS targets in both countries.

The IS has been designated a terrorist organization by the United Nations, the European Union and a number of other countries, including the United States, Australia, Saudi Arabia and Egypt.

The group has gained notoriety for its appalling human rights atrocities. IS members are responsible not only for numerous attacks against NATO forces on the territory of Iraq, but also for mass executions of Iraqi and Syrian servicemen and genocide against those of other faiths. The immediate stated goal of the organization is the creation of an Islamic Sunni state, founded on sharia law, on its seized territories in Syria, Iraq and Lebanon. Leaders from within the IS seek the expansion of the state to coincide with the shape of the "Classical Caliphate," an area measuring from Spain to India.

According to experts, Islamic State is one of the richest terrorist organizations in the world, with financial resources estimated at over $2.3 billion. It is estimated that speculating on the oil black market increases its assets by $1 million a day.

The self-proclaimed caliphate also gets billions of dollars through bank and shop robberies, seizing the property of adherents of other faiths, hostage exchange, slave trade, control over drug trafficking and illegal ways of oil deliveries.

Iraqi and Syrian authorities are struggling to stop the advance of the IS. Using a form of religious and ideological fundamentalism, the terrorist organization is attempting to gain control of an area rich in oil resources. In response, the United States and a number of allied countries began on September 23 to carry out air strikes against IS positions in Syria. A similar operation has been ongoing in Iraq since August. In Syria the United States is using its air force without authorization from the Syrian government.

Jabhat al-Nusra, or al-Nusra Front (Support Front), was established in January 2012 as one of resistance groups fighting against the government during the Syrian civil war. Prior to that, from October 2011 to January 2012, the would-be leader of Jabhat al-Nusra Abu Mohammad Julani held consultations on organizing an anti-government Islamic group with Syrian Mujahidins who had been fighting in Iraq until 2007.

The group announced as its priority the enhancement of the role of Islam in the Syrian conflict with the subsequent building of the Islamic state al-Sham Caliphate. Al-Sham includes Syria, Lebanon, Jordan, Israel, and the Palestinian territories. From an ideological standpoint, Jabhat al-Nusra identifies itself with jihadist Salafite outlook of al-Qaeda.

The supreme organ of Jabhat al-Nusra is a consultative council of jihad fighters — The Majlis Shura al-Mujahideen (Mujahideen Shura Council). The group also has subordinate organizations which conduct operative activities, mobilize finances, procure weapons and smuggle them into Syria, as well as dealing with religious issues, PR and external relations.