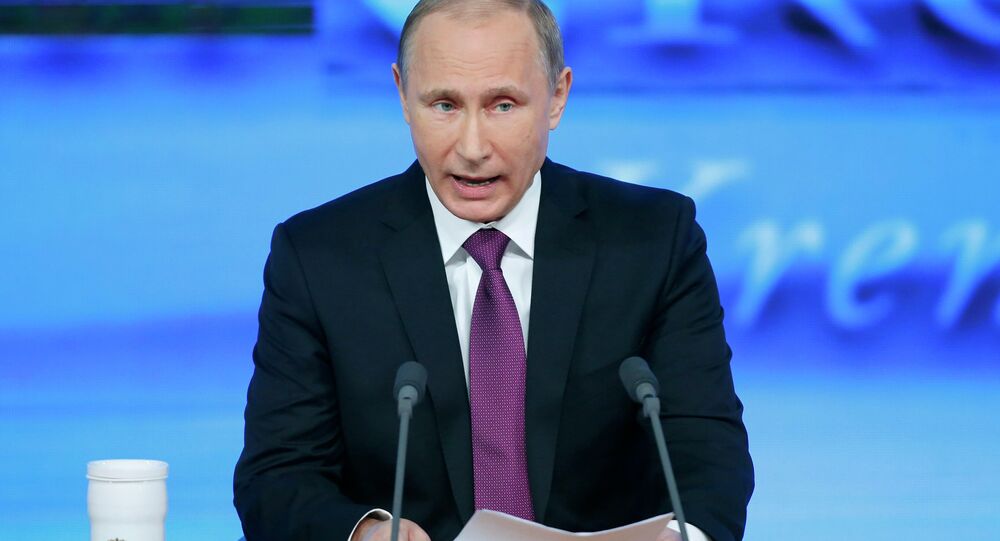 Putin: Questions Remain on Whether Government Reacted to Challenges Timely

Russian President Vladimir Putin said the government reacted to recent economic challenges promptly and in time, but in general they made steps in the right direction.

“There are some questions to the government and the Central Bank about the timeline and quality of the measures taken, but, in general, their actions were adequate and were made in the right direction,” the president said during a press conference.

© Sputnik / Ilya Pitalev
Rate Hike by Russia’s Central Bank May Deepen Recession in 2015: BofA Merrill Lynch
The Russian Central Bank announced on Wednesday it was considering new measures to stabilize the national currency after the ruble contracted by more than half of its value against dollar due to sanctions and sinking oil prices.

The same day, the bank started selling currency reserves stored in the country's safe-net Reserve Fund. It previously hiked interest rates from 9.5 to 10.5 percent and later to 17 percent, raising concerns that the move would make it more difficult for consumers to spend money freely.

Before the ruble hit record-low on Tuesday, the Central Bank had also drastically decreased its support for the national currency by scaling down its interventions, and claimed it was considering floating the ruble starting in 2015.

Current downturn in Russian economy provoked, first of all, by extrenal factors, primarily the slump in global oil prices

"Of course, the present situation was provoked, above all, by external actions,” he said.

Putin added that oil and, to a lesser degree, gas price is the major factor for the economic downturn.

Russia's economy currently suffers from a sharp decline in oil prices, with the country's budget being largely dependent on energy exports. The fall in global oil prices continued following the decision of the Organization of the Petroleum Exporting Countries (OPEC) not to cut oil production.

In particular, the Russian ruble has plummeted recently by a whopping 20 percent to historic lows.

Moreover, Russian economy feels the impact of the current geopolitical tensions and the Western sanctions that were imposed on Moscow over its alleged involvement in the Ukrainian crisis, although Moscow has repeatedly denied these claims.

“I said that even given the most unfavorable internal market condition this situation may last for about two years… But the situation may start improving even earlier… in the first, second quarter, in mid-2015 or at the end of the next year. No one can say for sure,” Putin said during a press conference.

Russia is currently experiencing an economic slowdown and a rapid depreciation of the ruble amid a dramatic decline in prices on oil, which accounts for a significant part of the Russian budget's revenues.

A number of top Russian officials have cited economic sanctions imposed on Russia's energy, defense and banking industries by the West over Moscow's alleged involvement in the Ukrainian conflict and speculation on currency market among other reasons for the country's current financial and economic problems.

In November, the Russian finance minister said that the country's budget may lose up to $21.5 billion next year amid low oil prices and slow economic growth.

Russian President, however, repeatedly stated that the country’s 2015 budget will be executed in any macroeconomic situation.

The Russian economy will inevitably recover from the current downturn in the next few years, Putin said.

“If the situation takes a negative turn, then we will have to introduce some amendments to our plans. Naturally, something will have to be trimmed. However, I would like to stress that a “positive rebound,” as experts call it, and subsequent growth are inevitable under present circumstances,” the Russian leader told reporters.