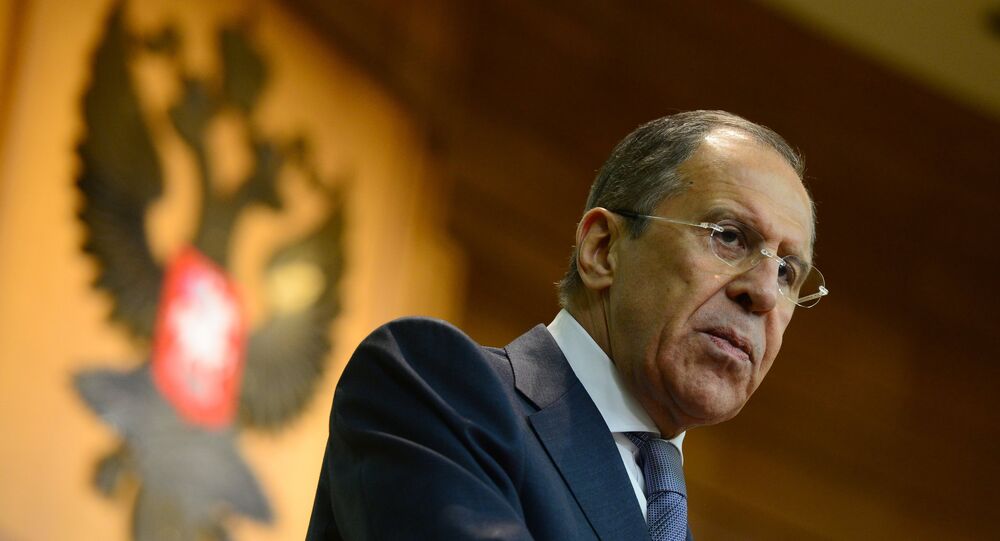 Russian Foreign Minister Sergei Lavrov said that Moscow supports territorial integrity of Ukraine and is not suggesting federalization or autonomy for the self-proclaimed republics of Donetsk and Luhansk, because the issue is for Ukrainians to decide.

"After the meeting with President Hollande in Moscow on December 6, President Putin talking to the press reconfirmed what he said repeatedly, that we support territorial integrity of Ukraine," he said in an interview with the France 24 channel.

When asked whether the self-proclaimed Donetsk and Luhansk republics can follow the scenario of Crimea, which rejoined Russia after a referendum, Lavrov said that "Crimea is unique, the one and only, the Russian land."

"It was not an exception, it was the will of the people," the minister continued. "Ukraine as we recognize it now is territorially integral from the Russian point of view and should be supported in this form.”

He said that Moscow was not suggesting federalization or autonomy for the self-proclaimed republics of Donetsk and Luhansk, because the issue "is for Ukrainians to decide."

Following the February coup in Ukraine, Crimea and the city of Sevastopol held a referendum, as a result of which the region seceded from Ukraine and reunified with Russia, with more than 96 percent of the peninsula's population supporting the move. Ukrainian regions of Donetsk and Luhansk announced their independence from Ukraine in early April.

Western nations have accused Moscow of escalating the conflict in Ukraine and meddling in the country's internal affairs, but Russian authorities have repeatedly denied the claims, calling for political dialogue and peaceful settlement of the confrontation.

"There is reason for some cautious optimism," the minister said in an interview with the France 24 channel, adding that media reports about Moscow being ready to host a reconciliation meeting were new to him.

"We have been pushing for convening another meeting in Minsk of the contact group, which is very important to make sure that we intensify the implementation of the Minsk protocol signed in September, and that's what we're trying to achieve at the moment," Lavrov said.

In September, the Kiev forces and eastern Ukraine's independence supporters agreed to a ceasefire during talks in Minsk with the participation of Russia and the Organization for Security and Co-operation in Europe (OSCE).

However, despite the agreed upon ceasefire, the warring sides subsequently accused each other of violating the truce since then.

The latest round of reconciliation talks was expected to take place in Minsk on December 11, but the date has been pushed back in light of additional preparations. Denis Pushilin, Donetsk People's Republic's negotiator at the reconciliation talks, said on Monday that a video linkup was needed prior to the next round of talks.

There are serious reasons to believe that the Western sanctions against Russia are aimed at creating a regime change in the country, Russian Foreign Minister Sergei Lavrov said in an interview with France 24 television.

"I have very serious reasons to believe that this is the case <…> Some politicians don’t even hide it," Lavrov said.

"I can assure you that Russia will not only survive, but will come out stronger out of this. We have been in much worse situations in our history, and every time we were getting out of these fixes much stronger," Lavrov stressed.

In March, the United States, the European Union and their allies started implementing sanctions against Russia in response to Crimea's reunification with the country. The restrictive measures first targeted a number of Russian senior officials and some entities.

After the military conflict in Ukraine's southeast broke out in April, the West ratcheted up its sanctions, citing Moscow's alleged meddling in the Ukrainian conflict. The sanctions targeted the finance, defense and energy sectors of the Russian economy, as well as more individuals.

Russian President Vladimir Putin warned anti-Russia sanctions would have a boomerang effect, while Lavrov pointed out the restrictions were obviously counterproductive.

"We prefer to be realistic, and realistically speaking, the deal on the Iranian nuclear program is within reach," Lavrov said.

"And certainly the timeframe, which was agreed again – the end of June next year – is chosen because in addition to the basic political framework agreement, which could be reached in a couple of months, there would be a need for very technical, very detailed annexes," Lavrov said, adding that he did not expect any new extensions.

The West has long held suspicions that Iran is attempting to develop a nuclear weapon under the guise of a civilian nuclear program, but Tehran says that the program is aimed purely at achieving peaceful goals.

The P5+1 group of six world powers comprising Russia, the United States, the United Kingdom, France, China and Germany joined diplomatic efforts back in 2006 in an attempt to reach a deal with the Tehran authorities assuring the peaceful nature of the Iranian nuclear program. Since then, the group has held several meetings with Iran, but the sides failed to reach a compromise.

The latest round of talks between Iran and the P5+1 group held in November in Vienna did not produce a comprehensive deal on Iran's nuclear program and the sides agreed to continue the discussions until July 2015.

"We would strongly prefer to do everything to reach consensus in the Security Council," the minister said in an interview with France 24 television.

"And I discuss this thing with John Kerry, with my Arab counterparts, and we will continue these discussions just in the next few days,” he continued.

Lavrov said the resolution was “absolutely legitimate, and we cannot but support it."

"They just request the previous agreements, the Security Council resolution – resolutions, the Madrid principles, and other arrangements reached by the parties in the past, to be implemented," the foreign minister said.

The resolution, however, was derided by Israeli Prime Minister Benjamin Netanyahu, who said it would fall through.