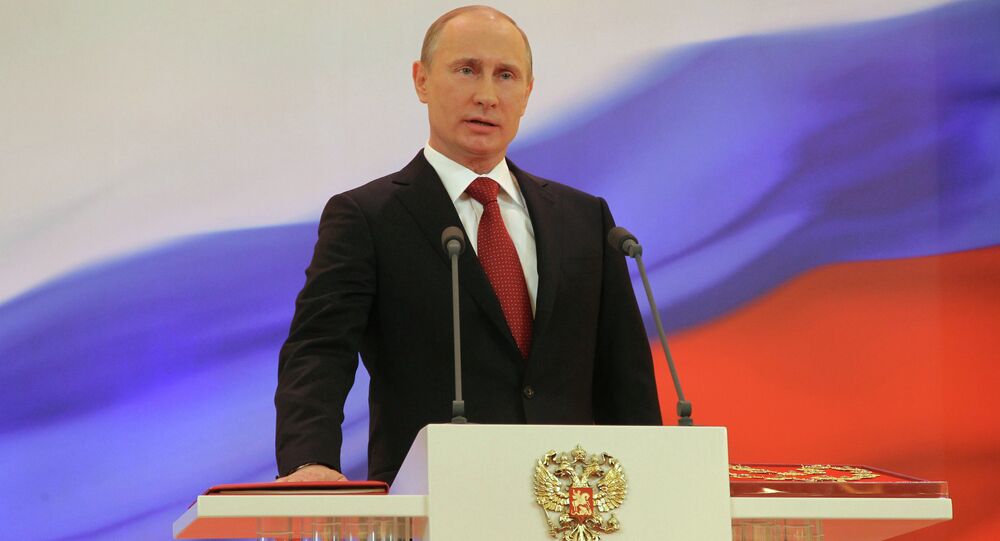 Unlike preceding constitutional documents, the new Fundamental Law does not stipulate a preset single economic system based on state property, and it defends all forms of property in equal measure.

© REUTERS / Sergei Karpukhin
Putin Reiterates Call for Caution While Amending Constitution
MOSCOW, December 12 (Sputnik) – December 12 marks the day, in 1993, when the Constitution of the Russian Federation was adopted.

The current Russian Constitution was drafted and approved during a series of negotiations between the executive branch, in the person of President Boris Yeltsin, and the legislative branch, in the person of the Supreme Soviet of the Russian Federation. The Constitution is based on several sources including the draft document of the Constitutional Commission of the Supreme Soviet (the so-called “Rumyantsev draft document”) and a document drafted by the Constitutional Conference, convened under Yeltsin’s order.

The Constitution was published and officially entered into force on December 25, 1993.

The new Constitution of the Russian Federation considerably changed the structure of the supreme institutions of state authority. It formalized the principle of the separation of powers and made many other profound changes in Russia’s federal system. For the first time in Russian history, constitutional provisions received direct-action status. This meant that any person could defend his or her rights by citing the specific constitutional provision. The courts and other state agencies were now guided by the provisions of the Fundamental Law when reviewing cases and decisions.

Unlike preceding constitutional documents, the new Constitution of the Russian Federation did not stipulate a preset single economic system based on state property, and it defended all forms of property in equal measure, thereby laying the groundwork to ensure the free development of civil society.

The Fundamental Law proclaimed the president as the head of state and imposed on him a duty to defend the Constitution, individual rights and freedoms and the country’s sovereignty, its independence and territorial integrity, and to ensure the well-coordinated operation of, as well as cooperation between, state agencies.

The provisions of the Fundamental Law do not require any other legal confirmation. Any legislation passed in Russia must not run counter to the Constitution.

Presidential Executive Order No. 1138 of August 5, 1996 noted that the one-of-a-kind copy of the Russian Constitution was to be the official symbol of presidential power.

Twenty-four hours before his inauguration, set for May 7, 2000, Acting President of the Russian Federation Vladimir Putin abolished the 1996 Executive Order No. 1138 of Presidential Regalia. The special copy of the Constitution’s text was then stripped of its official status as the symbol of presidential power.

This special copy of the Constitution was used during all inauguration ceremonies involving Vladimir Putin (in 2000, 2004 and 2012), as well as during the inauguration of President Dmitry Medvedev in 2008. However, this is not a binding tradition, and its use is not stipulated by any law. From 2000 on, the President of Russia may take the oath of office while placing his hand on any edition of the Fundamental Law.

The special copy of the Russian Constitution is stored at the Library of the Presidential Executive Office in the Kremlin and is only used during the presidential inauguration ceremony and only if the new president requests the specific copy.

In 1996-2008, the Constitution was amended several times following the inclusion of new regions to the country, and reflecting changes in the names of those territories.

From 2009, the Fundamental Law increased the presidential term from four to six years, and the tenure of State Duma deputies was increased from four to five years.

The government is required to report on its activity before the State Duma. The texts of the reports are published by Rossiiskaya Gazeta and Parlamentskaya Gazeta newspapers.

It was also amended after the incorporation of the Republic of Crimea and Sevastopol, a city with federal status, into the Russian Federation.

Other amendments were made after the introduction of the institution of “federal senators.”

For the first 12 years after its inception, December 12 remained an official holiday. Beginning January 1, 2005, it became a working day under amendments to the national Labor Code (Federal Law of December 29, 2004), passed by the State Duma. In July 2005, Russian Constitution Day was listed among other memorable dates.

© Sputnik / Artem Zhitenev
Russia Amends Constitution to Include Crimea, Sevastopol
In 2013, the Russian Public Opinion Research Center (VTsIOM) queried respondents on the role of the national Constitution. In all, 35 percent of those polled said the Constitution played an important role because it maintained law and order in the country and because it set forth individual rights and freedoms. 35 percent said that its role was insignificant. 22 percent said the Constitution only plays a nominal role, and that its provisions are not being realized.

In 2000, most Russian citizens (53 percent) said that the Constitution should be improved. Nine years later, public opinion changed, noting that such amendments were only necessary in exceptional situations (47 percent). In 2012, 45 percent of those polled stated a need to improve and supplement the Constitution, with 43 percent saying that it should not be amended.

In 2013, 42 percent of Russian citizens said it was permissible to amend the Fundamental Law, with 38 percent opposing this. At the same time, 49 percent of the respondents said there was no need to change constitutional provisions.

Over 20,000 Released in Honor of Russian Constitution Anniversary